Skaill House is a historic 17th-century mansion situated a short walk from the Skara Brae prehistoric site. The house was built for Bishop George Graham around 1620 but has been the family home of the Lairds of Skaill since.

Bishop Graham chose a spot for his new house between Loch Skaill and the Atlantic coast of Orkney, not knowing that he was building within 200 metres of the hidden stone village of Skara Brae. There was a Norse farmstead on the site, and the west wing of the house is built over a Norse burial ground. The name 'Skaill' itself is of Norse origin, meaning 'hall'.

The first house was quite simple, but it has been enlarged several times over the centuries to become a sizeable mansion house.

Bishop Graham was married to the niece of James ('The Admirable') Crichton, a late 16th century genius in arts, languages, and sciences. Graham was a jovial man, but his geniality was his downfall, for he was accused of being too lenient in his attitude towards witches, adultery, and incest. He was removed from his post in 1638 but he was still allowed to keep Skaill House. 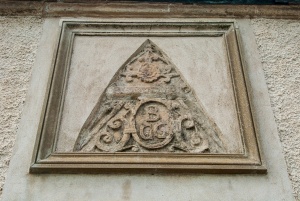 His son became the 1st Laird of Skaill House, and the property has been passed down through 12 generations of the same family since.

The family's connection with Skara Brae is more than just proximity; it was the 7th Laird of Skaill, William Watt, who excavated the site in 1850 after a fierce storm exposed some of the stone houses.

Among the prized possessions on show inside Skaill House is Captain Cook's dinner service, a gift to the family by the explorer. Another highlight is an unusual Norse calendar stick, and, not surprisingly, finds from the Skara Brae site. You can see Bishop Graham's bedroom and paintings by acclaimed Orkney artist Stanley Cursiter.

There is history wherever you look at Skaill; Bronze Age mounds surround the property, and you can see remains of an Iron Age broch by the shore. The house is said to be haunted by friendly spirits, objects have been known to move on their own, and doors open and close without anyone being present.

Our family got a combined ticket to Skara Brae and Skail House and walked to the house after we'd visited the stone village. It was a grey, overcast day, but glimpses of blue sky kept breaking through, making the house appear both forbidding and attractive at the same time, in that peculiar Highland way.

Coming directly from Skara Brae to Skaill House was remarkable; the contrast between the bare stone huts and the comfortable 17th-century mansion could not have been more pronounced. Yet Skaill is not a showpiece stately home, but a comfortable house. The owners of Skaill were never wealthy in the manner of a Duke or Earl, and Skaill is relatively simple, though it must have seemed a veritable palace to the 17th-century natives of Orkney.

What really made the visit memorable were the family mementoes, such as the dinner service given by Captain Cook, and personal possessions of seafaring members of the family. We had an extremely good visit, and I can definitely recommend combining both Skaill House and Skara Brae for a very enjoyable experience. 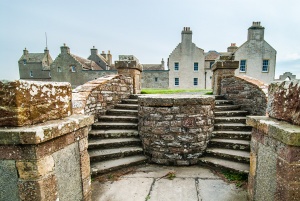 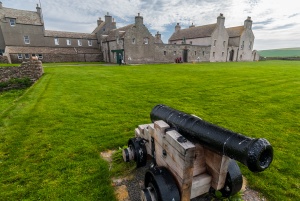 A cannon on the lawn 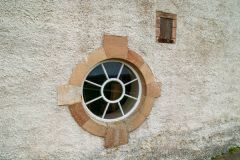 Nearby accommodation is calculated 'as the crow flies' from Skaill House. 'Nearest' may involve a long drive up and down glens or, if you are near the coast, may include a ferry ride! Please check the property map to make sure the location is right for you.

More self catering near Skaill House >>