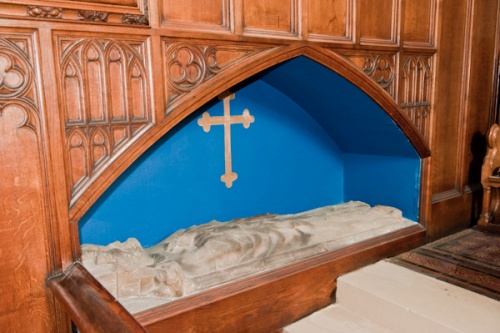 The parish church of St Cadfan's in Tywyn dates to the Norman period, but it contains a much earlier historic treasure in the form of St Cadfan's Stone, a slender sculptured stone monolith dating to the 8th or 9th century. St Cadfan's Stone is inscribed with the earliest known example of written Welsh language, making it an artefact of immense national importance.

According to the Royal Commission on the Ancient and Historical Monuments of Wales (RCAHMW), the carvings translate loosely as 'The body of Cingen lies beneath', 'Egryn, Malteg, Gwaddian, together with Dyfod and Marchiau', and 'The tomb for ...'.

The church guidebook, however, gives the translations as, 'Tengrui (Cengrui) legal wife of Adgan, between Budd and Marciau', and 'Cun wife of Celen, loss and grief remain'. At the base of the stone are comments, 'Here lie three', and 'here lie four'.

The significance of these worn incised carvings is that they show that the leading families of the area were using the Welsh language, rather than Latin. The best-preserved writing is on the side facing south (facing you as you enter the church). The stone was carved sometime around AD 800, and was discovered serving as a gatepost for a pigsty! 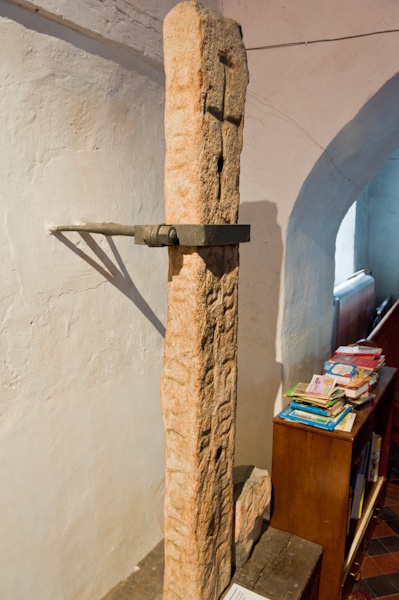 The first church settlement, or clas, was founded at Tywyn around AD 516 by Cadfan, a missionary from Brittany. According to the Book of Llandaf, Cadfan brought twelve brothers with him and established a settlement centred around a nearby well.

Cadfan's church became the most important in the Comote of Meirionnydd, and became the mother church of all the others in the region. Two wooden churches were sacked and destroyed by the Vikings. The monks at Tywyn adopted the Augustinian rule and established an ecclesiastical college (the street that runs beside the church is still called College Green).

The Augustinian brethren built the first stone church in the 12th century. Remains of that Norman building include the very large, rounded columns in the nave, and the narrow, deeply set clerestory windows.

St Cadfan's originally had a central tower, but that tower fell down in 1693 and was rebuilt at the west end in 1736. The tower was pulled down in the late 19th century and the entire structure was rebuilt along its original lines.

St Cadfan's Stone stands in the north-west corner of the church, near a much later monolithic stone that once served as a sundial. This stone has a rounded top carved with a semi-circular sundial and a later 17th-century inscription below. It is possible that it was brought here from a nearby abbey.

In the chancel are a pair of medieval effigies. One depicts an armoured knight, known as The Crying Knight. The effigy is thought to represent Gruffudd ap Adda of Dôl-goch, who died around 1331. The identification is based on a nearby inscription on the wall, but the inscription is much later than the effigy and in a different script, so the identification is uncertain at best.

The moniker 'The Crying Knight' comes from the fact that when the weather is wet, the effigy appears to weep Though there are more practical explanations for the phenomena, the 'tears' have given rise to many romantic tales.

The other figure is that of an unknown priest, or, as some accounts have it, an unknown female. Other items of interest include a very simple Norman font just inside the south door and a beautifully carved early 20th-century organ case. 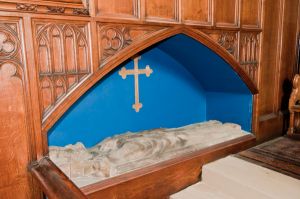 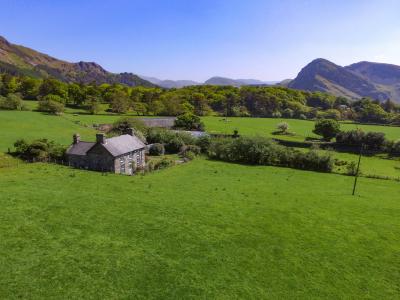 This detached farmhouse rests in Llanegryn and can sleep eight people in four bedrooms.
Sleeps 8