HERITAGE HIGHLIGHTS:   Superb carved medieval screen, one of the finest in Wales 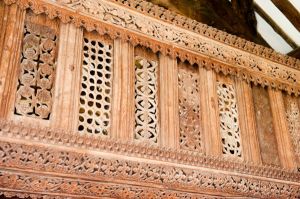 The tiny village of Llanegryn hardly seems like the sort of place you'd find a historical treasure, but such is the case. The medieval church of St Egryn boasts a wonderfully carved medieval rood screen, one of the few screens in Wales to survive the medieval period.

The screen is carved of oak, and local rumours suggest that it came to Llanegryn from Cymer Abbey after the abbey was dissolved by Henry VIII. The craftsmanship is exquisite, the design incredibly intricate, with caved berries, leaves, vines and bunches of grapes delicately crafted.

The screen dates to about 1520, as does the rood loft and the nave roof. The screen consists of three bays either side of a central opening. The rood loft has 13 panelled bays with a cross in the centre bay.

The first record of a church at Llanegryn comes from 1254. The south porch may also be medieval, and the font is 12th century. One medieval window survives in the north wall of the nave. There is a medieval pillar stone carved with a cross symbol, built into the south wall.

The current building is primarily a Victorian restoration, though we can be thankful that the Victorians, with unusual restraint, resisted the urge to remove the rood screen!

While the screen is the main reason to visit the church, there are other items of historical interest, including the Norman font, and monuments to the Owen family. 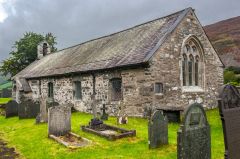 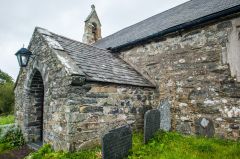 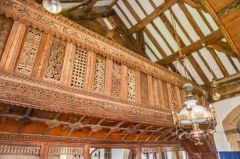