HERITAGE HIGHLIGHTS:   A well-preserved example of a post-medieval packhorse bridge 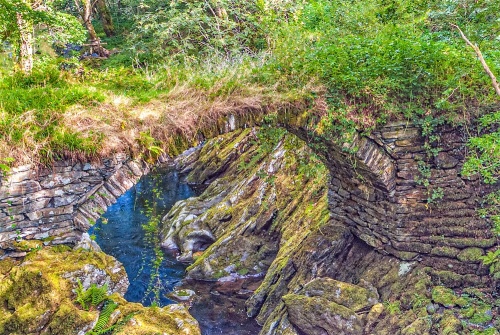 Penmachno Roman Bridge is an elegant single-span packhorse bridge across the Afon Machno south of Betws-y-Coed. Despite the name, it is not Roman, but dates to the 17th century, though it is entirely possible that it stands on the site of an earlier Roman bridge.

How did the bridge get its 'Roman' moniker?

The most likely answer is that it stands near the route of a Roman road that ran south to Tomen y Mur. 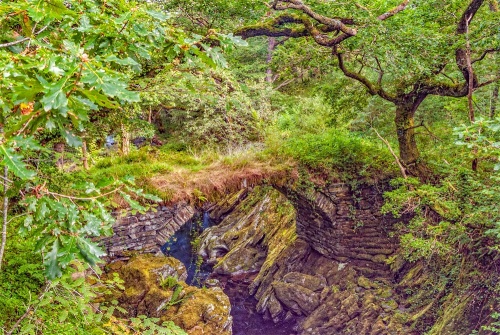 A 1662 General Sessions record refers to an ancient bridge known as 'Pontrhydgynon', which may be this bridge. The bridge was said to have a datestone inscribed with '1680', but no sign of the stone remains.

The bridge -- Roman or not -- is a beautiful historical structure. It has a span of roughly 10m (33 feet) and is 3m wide (10 feet). Each end springs from an abutment with splayed sides for reinforcement. Some cobbles remain on the bridge deck.

The River Machno, or Afon Machno in Welsh, is a major tributary of the River Conwy, and runs from the upper reaches of the Penmachno valley and runs north to the River Conwy, falling -- literally -- over Penmachno Falls and the impressive Conwy Falls before its confluence with the larger river.

From the A5 just east of Betws-y-Coed take the B4406, signposted to Penmachno, Ty Mawr, and Conwy Falls. After about 700 metres you will come to a minor lane leading off to the right. This lane runs through the village, past the old Penmachno Woollen Mill, and crosses a modern road bridge over the Afon Machno. Immediately north of the modern bridge is the Roman Bridge.

There are no obvious stopping places along the road, but there are wider places on the verge both before and after the river crossing. The bridge is on the Snowdonia Slate Trail long-distance footpath.

Five hundred metres north of the bridge, on the west bank of the River Machno, is Machno Falls.

Self Catering near Penmachno