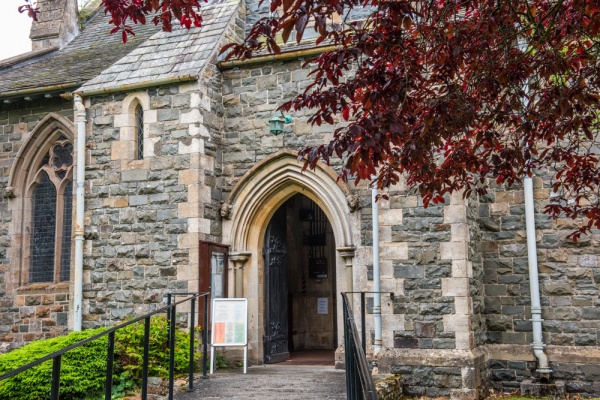 During the 19th century Llandrindod Wells grew from a quiet rural backwater supporting some 300 residents to a bustling town of several thousand people. Those numbers were at least trebled in the summer months when visitors descended on the town to take the spa waters.

Before the town developed a reputation as a fashionable spa, it had been served by a small 13th-century church well away from what is now the town centre. With the huge growth in population, the old church was much too small and inconvenient. A new church was needed.

In stepped a wealthy local landowner named Edward Middleton Evans, who donated land on the highest point of Cefnllys Common, near Rock Park Spa and the Grand Pavilion. The new church was financed by donations from local townsfolk and visitors to the spa.

The new church was designed by architect Thomas Nicholson of Hereford and built to hold a congregation of 500 people. It was initially known as Christ Church but when it was officially consecrated for worship in 1881 it was dedicated to the Holy Trinity.

Curiously, the church did not at first have a full-time rector. Instead, a part-time curate was appointed on a six-month term to coincide with the summer spa season. Holy Trinity was very much a 'spa' church, built to handle the high season influx of visitors. 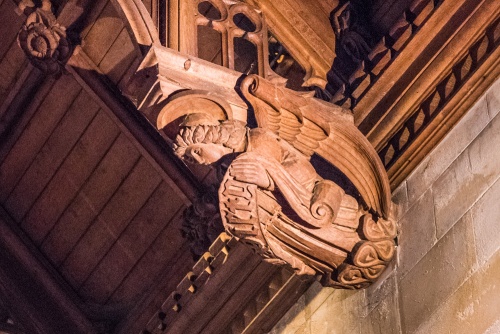 Carved angel on the hammer-beam roof

It was not until Henry de Winton, Archdeacon of Brecon, was appointed in 1881 that the church had a permanent rector. De Winton had an ornate rectory built nearby. The rectory is now the front section of the elegant Hotel Commodore.

Holy Trinity holds a special place in the history of the Church in Wales. It was here in 1920 that Dr Alfred George Edwards, the first archbishop of Wales, was confirmed and all subsequent Archbishops have been elected to office at Holy Trinity, which has the advantage of being located close to the geographical centre of Wales.

Like most Victorian churches the style is a mixture of medieval Gothic periods, including both Geometric and Decorated Gothic windows along with simple lancets. The exterior is made of rubble with freestone dressing and the interior of sandstone ashlar.

The interior highlight is perhaps the 1871 font decorated with carved foliage designs. The pulpit is also from 1871 and follows the Decorated Gothic style. A beautifully carved screen separates the north chancel from the aisle.

The stained glass windows are excellent and include designs by Florence Camm (1932). Another touching window commemorates those who fell in the First World War. Look for plaques to Private Cecil John Edwards and Private Charles Cheffers, who died in 1917 and 1918 respectively. Both plaques were erected by the fallen soldier's family. There is another memorial in the form of a wooden triptych to the men and women of both World Wars.

Another outstanding feature is the richly decorated hammer-beam roof, with exquisitely carved figures of angels at the wall plate. 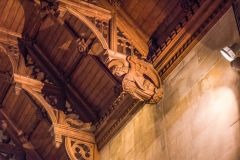 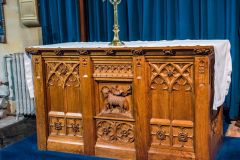 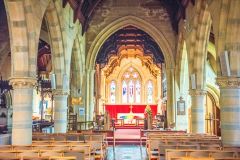