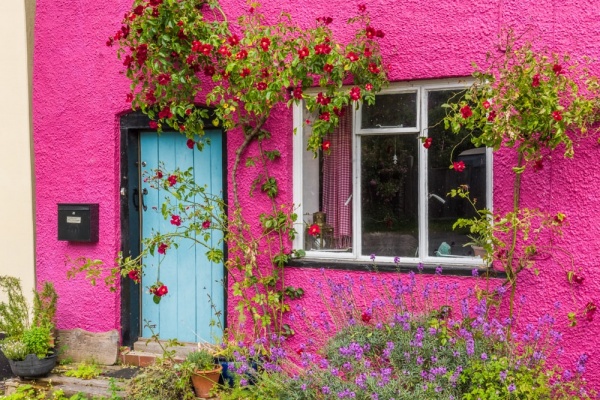 Presteigne is a pretty market town on the River Lugg, on the border of England and Wales. It was once the county town of Radnorshire and boasts a wonderful variety of historic buildings around the old town core. Presteigne, or Llanandras in Welsh, is situated in glorious unspoilt countryside in a picturesque area of the Welsh border region yet within easy reach of Hay on Wye, Shrewsbury, and Ludlow.

How beautiful is the area? The Automobile Association voted the route between Presteigne and Aberystwyth one of the ten most beautiful drives in the world.

The town's Welsh name Llanandra gives a clue as to its origins. Llanandra translates loosely as 'sacred enclosure of Andrew', suggesting that the first settlement here grew up around St Andrew's church, which acted as a minster, or mother church for the region.

Unusually, Presteigne lies on the eastern side of Offa's Dyke, the earthwork built by King Offa of Mercia in the 9th century to act as a border between his lands and the Welsh to the west. As a result, the population of Presteigne in the early medieval period was largely English. Unfortunately, this made the town a target for Welsh rebels, as we shall see.

At the time of the Domesday Book in 1086 Presteigne formed part of the manor of Humet. A century later it was recorded as 'Presthemede' or 'meadow of the priests'. 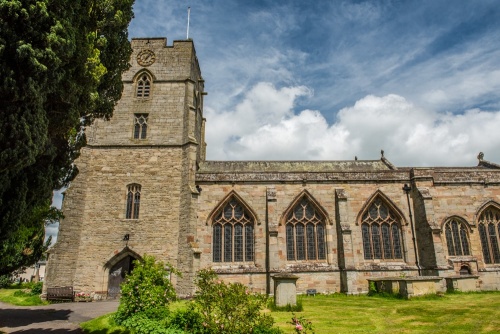 During that period a motte and bailey castle was erected on a spur of high ground between the River Lugg and Clatter Brook. This earthwork castle was never rebuilt in stone. It was probably destroyed by Llywelyn ap Gruffydd in 1262 and never repaired. In the 18th-century it was restored as a public pleasure ground, with woodland trails and a bowling green.

In 1225 William Fitz Warin, the local lord, obtained a royal charter to hold a weekly market and an annual fair.

Another rebellious Welsh lord, Owain Glyndwr, sacked the town during his rebellion against the English crown in the early 15th century.

The town recovered during the late medieval period as a centre for the cloth trade. That prosperity was brought to a crashing halt by three outbreaks of the plague, in 1593, 1610, and 1636. The town gained an unwelcome reputation as a plague town, with devastating effects on the local cloth trade. No one wanted to enter the town and the authorities tried to prevent residents from leaving.

Presteigne gradually recovered from the effects of the plague and became a thriving market town, with an economic boost from malting locally grown barley for brewing. The town's location on a major coaching route linking London and Gloucester to Aberystwyth made it a place of considerable importance. Presteigne was jointly named the county town of Radnorshire along with New Radnor, though before long it took over all administrative functions for the county.

In a roundabout way, Presteigne owed its status as county town to a terrible murder. In the 1530s a judge was murdered while presiding at the Court of King's Great Sessions in Rhayader. Since Rhayader was apparently not a safe place for important men like judges, a safe alternative was needed. Presteigne was selected, and for the next 400 years it was the legal and administrative centre of Radnorshire. 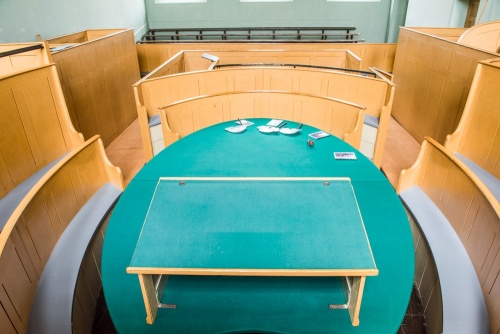 The courtroom in the Judge's Lodging

As the county town, Presteigne was home to the county gaol and the Shire Hall. The best reminder of this period is The Judge's Lodging on Broad Street, built in 1829 on the site of the former County Gaol. The Judge's Lodging offered accommodation to travelling judges and acted as the combination gaol and courthouse as well as providing a base for the Radnorshire Constabulary.

Presteigne lost its status as county town to Llandrindod Wells in 1884 but it judges continued to use the Lodging until 1970. The building was then converted into an award-winning museum offering a fascinating glimpse into the world of the 19th-century judges, their households, the constabulary, crime and punishment in one of Britain's poorest counties.

Presteigne is a wonderful place to explore, with historic buildings scattered around the town centre. A short stroll from the Judge's Lodging brings you to the medieval church of St Andrew.

Though the church is primarily a product of the 13th century it incorporates remains of a much earlier 9th century Saxon building. The most interesting historical feature is a Flemish tapestry woven in 1510, now hanging in a frame on the north wall. In the Lady Chapel is a 15th-century Italian oil painting and a worn 13th-century coffin lid is set into a recess in the north wall. Look for the memorial to memorial to Joseph Baker (d. 1817), after whom Mount Baker in Washington, USA is named.

In the churchyard is the grave of Mary Morgan, convicted and hanged for the murder of her infant son in 1805. Morgan was employed as an undercook at Maesllwch Castle, the seat of Walter Wilkins Esq. The case aroused huge interest at the time and large crowds watched her execution.

Part of the fascination with the case was that the identity of the child's father was never revealed. Morgan refused to say who the father was, and public suspicion fell on Walter Wilkins the Younger, son of Morgan's employer, who sat as a member of the grand jury that heard the case. Morgan was popularly portrayed as the victim of a heartless aristocrat who seduced her and then allowed her to hang without intervening. Though the tradition lingers, there is no evidence to support this version of events.

Morgan's headstone tells her story in these words, 'In Memory of MARY MORGAN who Suffer'd April 13th, 1805. Aged 17 years. He that is without sin among you Let him first cast a stone at her. The 8th Chapr. of John, part of ye 7th vr'. 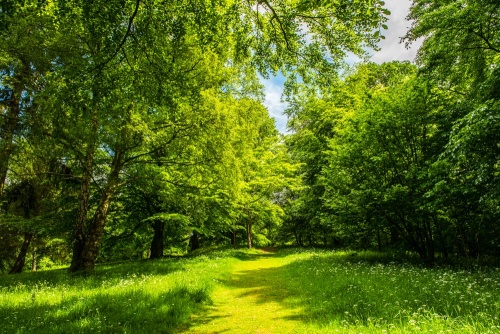 On St David's Street is the Manor House, once the home of the wealthy Bradshaw family and briefly used as the judge's lodgings. The building has a sedate Victorian facade but behind that facade is a timber-framed 16th-century core.

On High Street stands this picturesque early 17th-century inn, an excellent example of a half-timbered building. Look for the carved date 1616 over the doorway. The building we see today replaced an earlier one owned by Sir Christopher Hatton, one of Elizabeth I's courtiers. Like Manor House, it was owned by the Bradshaw family before becoming an inn in 1792. 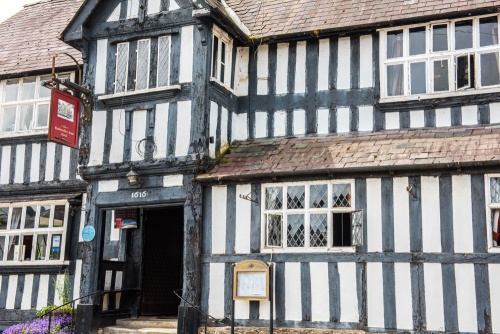 A modern facade on High Street hides the oldest building in Presteigne, built as a traditional hall house in the 16th century. Like many hall houses, it was built end-on to the street. Further along High Street is No. 47 where you can spot a finely carved figure of a Green Man, a pagan symbol of fertility.

At the junction of High Street and Broad Street is The Radnor Buildings, notable for its Arts and Crafts style timber facade with decorative plasterwork. Further along High Street is Harford House, the birthplace of Sir Harford-Jones-Brydges, a wealthy East India Company official and former British ambassador to Persia. Opposite the Radnor Buildings is The Assembly Rooms, built in 1869 in ebullient Italianate Gothic style. The arcaded ground floor originally housed a market but is now home to the public library. The first floor chambers still host regular public gatherings such as concerts and exhibitions. 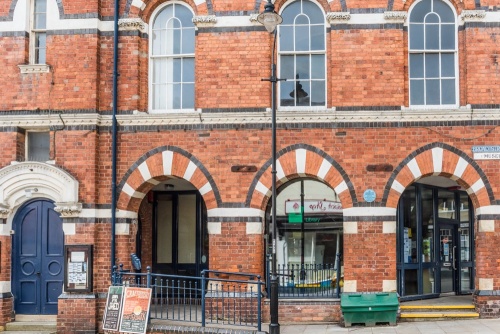 Aside from the Judge's Lodging, Broad Street has a wealth of fascinating historic buildings. Near the western end of the street is the former Newel's Ironmongery Shop, founded in 1770. The shop stayed in business until 1974 when the Museum of Welsh Life bought some 3000 items, many in perfect condition and dating to the 19th century. Some of the items are on display in the Judge's Lodgings.

Opposite the shop is the Duke's Arms, the oldest inn in Presteigne. The inn is named for the Duke of Chandos and was home to the very last mail coach in Britain (and the one with the longest route). Beside it is the Red House, the home of Admiral Puget, who gave his name to Puget Sound on Vancouver Island, Canada.

Further east along Broad Street is Roseland, a pretty cottage that was the home of Victorian artist JM Ince. Lok for Well House, so named because it has a spring in its cellar. Water emerges from the spring and runs into a cistern further down the street. At the bottom of the street is the Lugg Bridge, spanning the river of the same name which here acts as the border between England and Wales. You can walk across the bridge and technically have one foot in each country. Look for a stone waymarker on the wall of a building with the inscription: 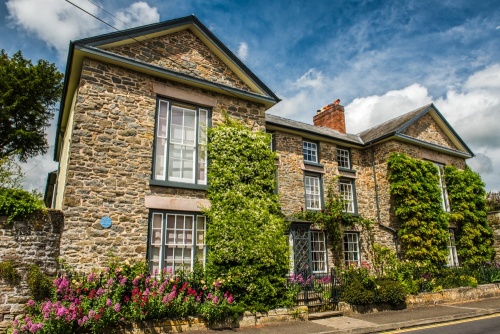 Just 3 miles from Presteigne is Stapleton Castle, built during the Anarchy, that tumultuous period of Civil War between King Stephen and Empress Maud in the mid 12th century. It was home to the powerful Mortimer family until it passed by marriage to Sir John Cornwall, who fought at Agincourt. The medieval fortification was later transformed into a comfortable Tudor house. The castle was slighted in the Civil War to prevent it from falling into Parliamentary hands. The castle is private property but can be viewed by guided tour on special open days throughout the year.

Just a few miles on the English side of the River Lugg is Bryan's Ground, a beautiful three-acre garden in Arts and Crafts style, surrounding a picturesque Edwardian house. The garden is composed of separate 'rooms' each with its own character. Areas include a Dutch water garden, a Gothic pavilion, and a sunken garden, to name just a few. 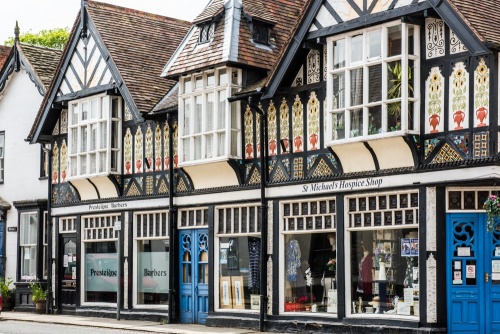 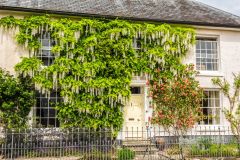 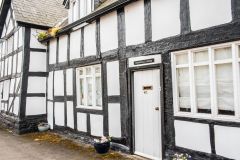 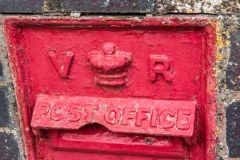 More self catering near Presteigne

More bed and breakfasts near Presteigne