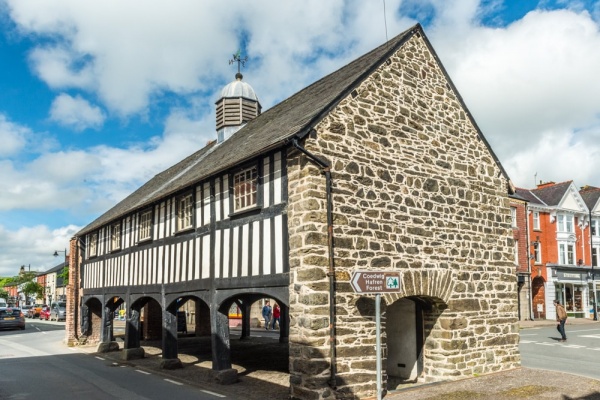 If your idea of a good time is exploring a gorgeous historic town, well away from it all, full of beautiful timber-framed buildings, then Llanidloes is the perfect destination. Llanidloes is easily one of the prettiest towns in Wales and its relatively remote location means it tends to have a quieter pace of life.

The town sits astride the infant River Severn; indeed it revels in the fact that it is the very first town on the Severn. From the town centre, you can follow the Severn Way long-distance footpath for 16 miles (25km) to the source of the river at Plynlimon. The walk takes roughly 6 hours and forms the first section of the Severn Way, the longest riverside trail in Britain.

Llanidloes is set in the midst of a relatively mountainous area, part of the old county of Montgomeryshire, though the 'mountains' have gently rounded edges and are more like inviting hills. The scenery and access to wilderness landscapes make the town popular with walkers and wildlife enthusiasts.

The hills surrounding Llanidloes are rich in minerals and you can still see evidence of old silver and lead mines. Traces of mining activity are noticeable on the scenic route from Llanidloes to Machynlleth. Lead smelting flourished in the 19th century, with local smelters fed by ore from the prolific Bryn Tail mine - at one time the most productive lead mine in the world.

The lead extracted and smelted locally needed good transport links with the outside world. In 1864 an imposing railway station was built and no less than 3 railway companies had their head offices at the station. 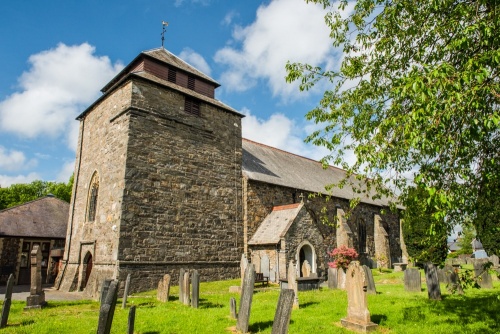 The lead mining and smelting produced a huge population boom, and with the increased number of people came a proliferation of chapels and an even larger number of pubs. The town hall began as a temperance hotel, built by the wealthy Davies family of Plas Dinam who became concerned with the amount of drunken behaviour in the town.

Built onto the facade of the Town Hall is a war memorial to the fallen of WWI. Interestingly, the names of the soldiers are listed by their home town or village. The memorial was given to the town by Richard Jerman, Mayor in 1914-1916.

On the side of the Town Hall is the Llanidloes Museum, sharing space with the library. The museum is quite small, but it displays some fascinating objects related to the town's history, including old photos of many timber-framed buildings that have been lost over time. One bizarre exhibit is a stuffed two-headed lamb, born locally in 1914. There is also a very good exhibit on the history of Chartism and the 1839 riots.

From the 18th century, Llanidloes developed a thriving textile industry, producing fine flannel cloth. When the textile trade went into decline in the early 19th century it hit the cloth-workers hard. Many joined the Chartist campaign for greater worker's rights and a more democratic society. Llanidloes gained a reputation as a centre of Chartist unrest. Chartist radicals held meetings in the Angel Hotel on Great Oak Street.

By April 1839 feelings were running so high that a riot broke out and the Chartists overthrew the town's government. It took five days before the unrest could be quelled with the aid of soldiers. On 30 April a mob of townsfolk forcibly released three men arrested and held at the Inn for their Chartist activities. The men were re-arrested along with 32 others involved in the unrest. Three of the others were sentenced to transportation.

For a full year, Llanidloes was occupied by the military as local people were tried and sentenced for their part in the riots. Over 100 people were convicted of offences and sentenced to transportation and imprisonment. 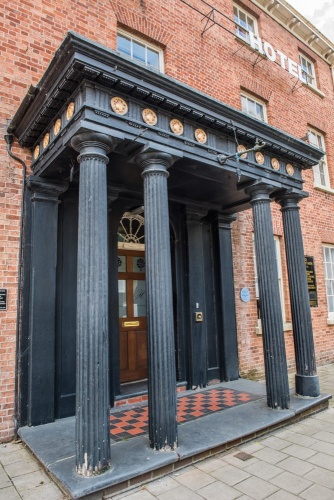 One reminder of the flannel industry is the Bridgend Flannel Mill, built in 1834 on the site of an 18th-century mill. The waterwheel was fed from a weir, shared with a corn mill. A steam engine was added in 1912, and the mill collapsed in 1932. The flannel mill was heavily damaged by fire in 1937 and converted into a Boy's Club from 1939.

It is now divided into flats but still retains its original industrial character. According to a man who stopped to chat when he saw me photographing the mill, you can often see kingfishers around the mill site.

Immediately beside the mill is Short Bridge, designed by Thomas Penson, the County Surveyor, and built in 1849 by Edward Jones of Dolgellau. Even older is the Long Bridge spanning the River Severn. It was built in 1826, also to a design by Thomas Penson. It replaced an earlier 1741 Long Bridge made of timber. 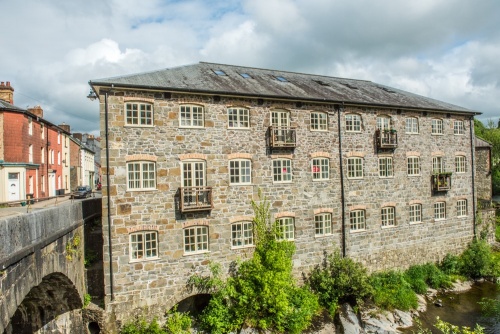 The town maintained its links to fabric long after the collapse of the flannel industry. It was here in a small shop on the main street that designer Laura Ashley opened her first business. And that's not the only link to fabric; Llanidloes is home to the Quilt Association of Great Britain who maintain a collection of heritage quilts in the Minerva Arts Centre. The town also plays host to an annual fancy-dress festival.

The origins of Llanidloes go back to at least the 7th century when the Celtic saint Idloes founded a church here beside the Severn. Very little is known about Idloes; he is said to have been the son of Gwyddnabi ab Llawfrodedd, a red-haired knight.

When the Normans invaded Wales in the late 11th century they established a motte and bailey castle at what was then the western edge of the settlement, where the Mount Inn now stands.

The town grew in size during the early Middle Ages and was granted a market charter by Edward I in 1280. Then in 1344 it received recognition as a borough, which enabled the residents to exercise a form of self-government.

In the centre of town stands St Idloes church, primarily a 15th-century building, and well worth visiting for its outstanding late medieval hammer-beam roof, richly decorated with carved figures of angels. The roof has been dated to 1542, making it perhaps the very last angel roof built in Britain. Within the church are 13th-century stone arches brought from nearby Abbey Cwmhir after the Dissolution of the Monasteries. 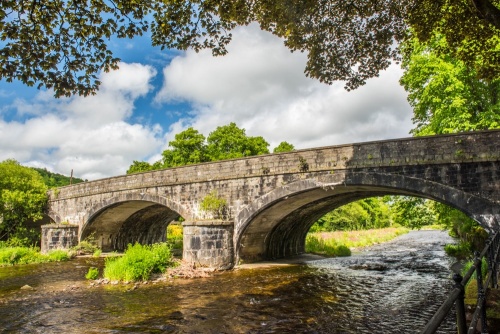 In the centre of town is the Old Market Hall, an iconic timber-framed building on stilts, erected around 1612 to serve as a combination market place and courthouse. Tree-ring dating has revealed that many of the timbers used in construction are older than the building itself and probably came from an earlier medieval hall on the same site.

The Hall stands at the meeting place of four medieval roads and is the only surviving timber-framed market hall in Wales still in its original location.

In 1748 John Wesley, the founder of Methodism, preached from the ground floor, standing on the 'Wesley Stone', by the north-west corner of the building.

Following are a few of the timber-framed historic buildings you will encounter as you explore the town trail.

This attractive inn dates to the early 18th century. It was here in 1772 that Gwilym Howell started the first local eisteddfodau, a celebration of Welsh culture.

The 'mount' in question is the old Norman castle mound. The castle is long gone but it is believed to have stood on this site. The inn is a lovely example of a timber-framed building, with a pitched cobble pavement area in front and the walls protected by weatherboarding near ground level. 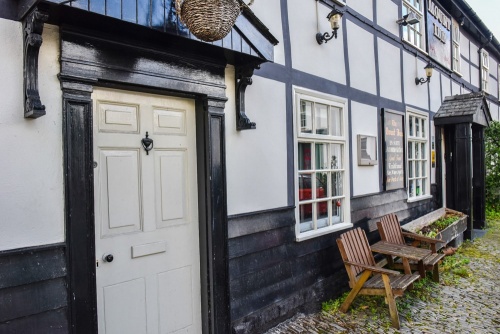 Known as 'Perllandy' in Welsh, this lovely house is a building in two parts. Near the road is a brick extension with decorative timbers painted on but behind it is an authentic timber-framed building erected in 1630. The interior has an inglenook and you can see the scorch marks left by burning rushes on the age-darkened beams.

One of the most prominent of Llanidloes' timber-framed buildings, but the Bank is not all that it seems. It was built in 1926 in 'black and white' Tudor Revival style to complement the authentic timber-framed Old Market Hall.

The Bank is an outstanding example of Arts and Crafts style, when the Tudor timber-framed look enjoyed a brief renaissance. Look for the decorated downpipes and beautifully carved doorheads. The Tudor style continues inside the Bank with richly decorated plaster ceilings and timber beams roughened with adze marks.

Built in 1748 according to a carved timber in the dining room. The timber bears the carved initials 'DD'. The Angel was used by the local Chartist radicals for their meetings in the buildup to the 1839 riots. 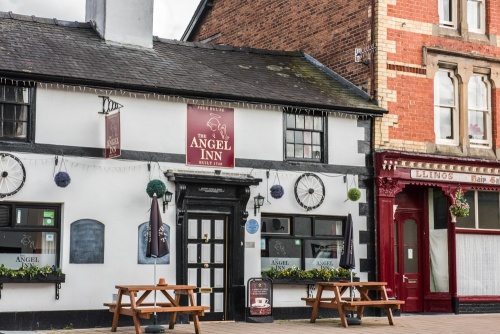 The Angel Inn, where the Chartists met

Built in 1790 by Edward Parry. At first glance, this colourfully decorated inn does not appear to be of any great age, but looks can be deceiving. The yellow and blue brick exterior facade hides a three-storey timber-framed core. You can get a glimpse of the timber-framing by going down the alley beside the inn to the rear yard.

The Crown and Anchor Inn

The attractive exterior in early 19th-century work but it hides a much earlier 17th-century core. The interior is beautifully unaltered, with lovely beamed rooms. 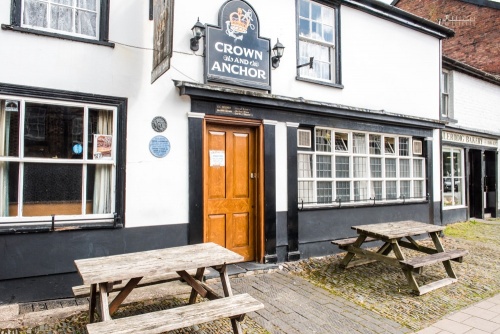 A lovely pub created by merging two old inns together. Not only did the buildings merge, so did the inn names. The former Royal Oak and the King's Head became the Royal Head. The oldest part of the building is 17th century.

Llanidloes is an absolute delight to visit. The combination of the magnificent countryside setting and the wealth of historic buildings makes it a wonderful place to explore. 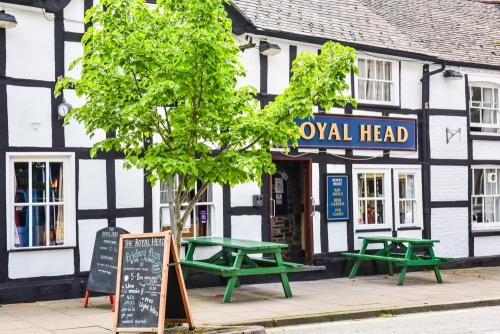 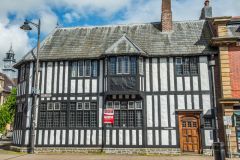 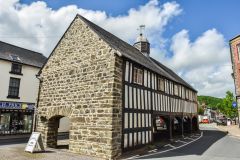 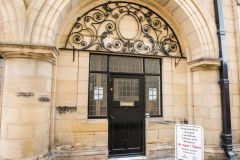 More self catering near Llanidloes

More bed and breakfasts near Llanidloes