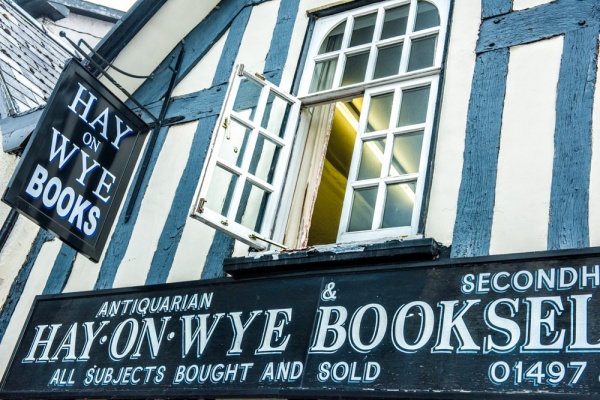 The pretty town of Hay-on-Wye is set in magnificent countryside on the east bank of the River Wye. Hay, or Y Gelli Gandryll as it is known in Welsh, is at the northernmost point of the Brecon Beacons National Park and is bounded by the Black Mountains to the west and south.

Hay (the 'on Wye' part of the name is usually dropped) is known as the Town of Books, both for its plethora of new and used book shops and for the annual Hay Literary Festival that brings world-famous authors to the town.

Hay is certainly for book-lovers, but it is also a magnet for outdoor enthusiasts and walkers. Two long-distance trails pass through the town; the Wye Valley Walk, which traces the Wye from its origins in the Cambrian Mountains to the sea at Chepstow, and Offa's Dyke Path, following the 8th-century earthwork erected by King Offa of Mercia from Chepstow in the south to Prestatyn in the north.

Hay stands on the main road to Brecon, the county town of Brecknockshire and traditionally the most important town in the region. Hay developed as an important stopover on the coaching route, with dozens of inns and pubs. 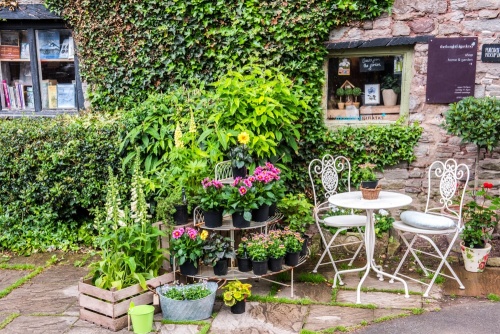 The King of Hay

Hay's literary associations began in the 19th century when the Victorian diarist Rev Francis Kilvert lived nearby for almost 20 years of his short life. Kilvert's popular diaries shone a light on the simple life of a country clergyman in the border country between England and Wales.

Then in the 1960s a young bookseller named Richard Booth purchased Hay Castle and proclaimed himself King of Hay, which he declared an independent state. Booth may have been eccentric, but there was a method to his madness. He established Hay as the Town of Books and began the annual Literary Festival.

This mini-tour of Hay is based on the excellent 'Discovering Historical Hay' leaflet available from the tourist information office near Hay Castle. The leaflet outlines a circular walk around the historic core of Hay and has a special section on seven holy wells and springs. 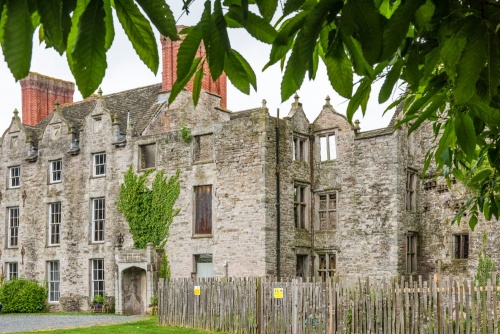 Hay's most important and intriguing historical building, Hay Castle was begun around 1200 by William de Braose II to replace the earlier motte and bailey by the Login Brook. According to legend, William's wife Maud de St Valerie built the castle in a single day, carrying the building stones in her apron. Poor Maud was starved to death with her eldest son in 1211 on the orders of King John.

The castle was restored only to be burned again in 1231 by Llywelyn Fawr. Henry III rebuilt the castle 2 years later. The castle suffered at the hands of Owain Glyndwr in 1402 and was damaged by another Welsh rebellion in 1460.

Around 1600 one section of the castle was rebuilt as an elegant Jacobean manor house by Howell Gwynn. The manor house, in turn, was badly damaged by fires in 1939 and 1977. After deteriorating for several years efforts are underway to restore the castle as a state of the art heritage centre.

Built in 1840 on the site of the Hay Town Hall. Like the nearby Butter Market (see below) the Cheese Market had an arcaded ground floor to sell cheese and dairy products. On the first floor was a chamber used as a meeting room. This first-floor chamber has now been renovated to serve as holiday accommodation. On the end wall is a sculpture of Henry Tudor (Henry VII).

Built in 1833 by William Enoch as an egg-packing warehouse. The ground floor arcades were bricked up in the 1950s, but the building was restored to its original condition in 1983. 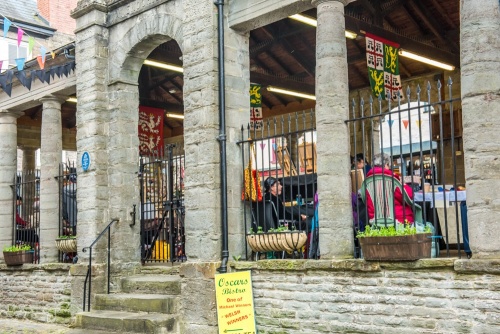 St John's (Eglwys Ifan in Welsh) began as a chapel for the garrison of Hay Castle. In the 16th century it also served as a guild church, with a chantry and chapel for local tradesmen. The original chapel was almost completely rebuilt in 1934. The original church graveyard is said to lie under the modern roadway in St John's Place. 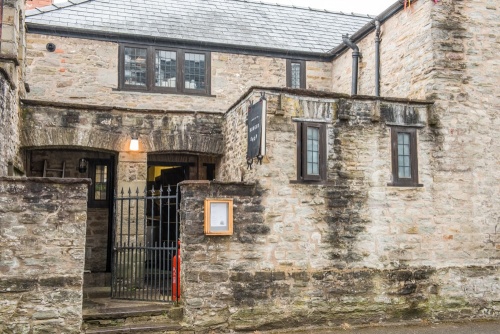 Located on Bell Bank, the Chapel is the second-oldest non-conformist chapel in Wales, built in 1647. The main chapel was rebuilt in the Victorian period but the schoolroom beside it is original. That probably makes the Hay Baptist schoolroom the oldest schoolroom in Wales.

One of the town's medieval gateways, located in the south-east corner of the town walls, near the eastern end of Bear Street. The exact location of the gate is unknown, but it probably extended across Lion Street to the old Drill Hall.

The location of the Lion Gate may be unclear, but the location of the Nyport Gate is not. The gate was built in 1237 during the initial construction of Hay's town walls. Look for a slot in the building at the corner of Newport Street and Wyeford Road. The slot marks one end of the gateway's supports.

At the junction of Broad Street and Bridge Street stands the oldest building in Hay with the exception of the Castle. The Three Tuns is a three-bay cruck-framed timber building erected in the 16th century. Look for the old mounting stone outside the Bridge Street entrance, to allow horse-riders to more easily mount their steeds. 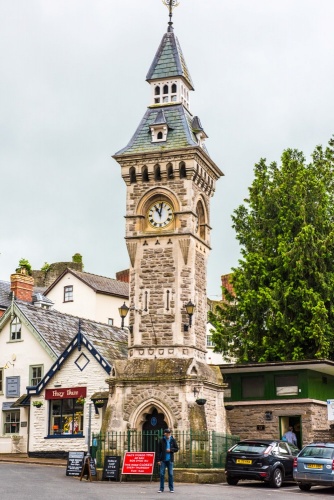 In 1884 Captain Powell of Pen-y-Maes left money in his will to install a clock in the church tower. His gift was instead put towards the cost of a clock tower on Broad Street. The distinctive Clock Tower was designed by architect JC Haddon of Hereford and cost £600 to build. It is 65 feet high to the tip of the spire.

Not far from the Town Clock, on the south side of Belmont Street, stands a late 18th-century mill built by the Howells family. The mill carded and spun wool into rough cloth used to make shirts for miners in South Wales. It employed 70-80 people at its height. The mill building was later converted into flats.

Look closely at the facade of the shop at 12 Castle Street and you can see a stone corbel slot that formed part of the Carles Gate; the western access point through the town walls. The building was formerly the Cock & Hen Inn and later served as the offices of the Hay Railway Company.

The first castle to be built in Hay was not Hay Castle; it was a relatively crude motte and bailey fortress erected around 1100 by a Norman knight named William Revel, one of Bernard de Newmarch's vassals. The motte was an earthwork mound protected by a timber palisade and surrounded by earthwork banks and ditches creating a bailey enclosure for secondary buildings. You can see the castle motte off a footpath on Church Street, just east of St Mary's Church. 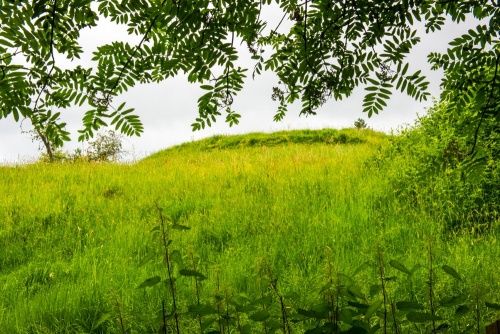 The motte and bailey castle

A largely Victorian church built in 1833 to replace a ruinous medieval building on the same site. The base of the tower survives from the medieval church, and the porch may also be original. Some 18th-century grave slabs also survived the restoration.

The original church was built beside the castle motte. When the present Hay Castle was erected and the town walls built both the church and the motte found themselves outside the town walls.

The church was originally granted to St John's Priory in Brecon, then transferred to the Bishop of St Davids. During the Commonwealth, the vicar, Thomas Dennis, was removed from the living because he was a Royalist supporter. He was replaced by John Dennis, who was ejected because he wasn't a Royalist! 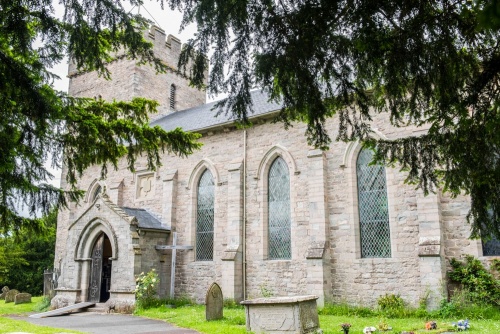 Hay was traditionally known for having seven wells. Interestingly, the two main churches in Hay, St Mary's and St John's, are both located within a triangle of wells. Could the churches have been built to take advantage of what was already seen as a sacred place because of the wells?

Just below the churchyard, on a bank sloping down to the River Wye, this well stood beside a medieval wharf. Local traditions say that troublesome spirits were laid to rest here at Walk Well.

Very close to Walk Well, on the Bailey walk, is this well whose waters were said to heal eye problems (but only if the water was collected at dawn).

Also known as Churchyard Well, the waters were used for baptisms in the church. A local tradition says that when the nearby church tower was being built it was threatened by fire. A miraculous fountain of water gushed from the well and put out the flames. You can see the well-head in a private garden just west of the churchyard.

Located behind the Swan Hotel, close to Login Brook. The waters of Swan's well were said to heal sprains. Sufferers bathed their hands or feet in the waters to obtain a certain cure.

When I visited Swan's well I was startled to see a local resident arrive carrying several large containers which he proceeded to carefully fill from the well's outflow. He told me he had been drinking only well water for the past 30 years and would never use any other water. 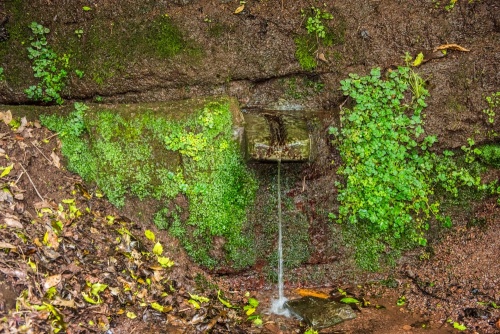 The waters of St John's Well were used for baptisms in the nearby church. The well no longer runs but its location is marked by a plaque on the wall of Hay castle on Oxford Road. The well was walled up in the early 20th century.

Located on Black Lion Green, beside Dulas Brook. This well is linked to a fascinating local tradition; it was said that whoever drank from the well first after a marriage would be the one to 'wear the trousers' in the marriage. Apparently, one bride filled a bottle ahead of time and carried it with her in the wedding ceremony so she would guarantee to be the first to drink the well waters.

Black Lion Well is also linked to St Keyna, the 25th daughter of Prince Brychan, who gave his name to Brecknockshire.

Located near the bottom of Newport Street, near the old town wall. This well has been walled up for some time but you can see a plaque set into the wall on the south side of the street. 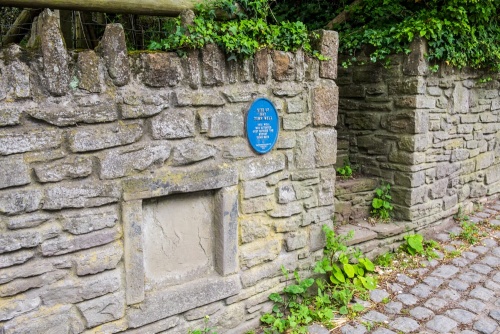 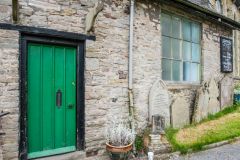 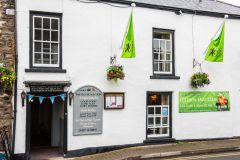 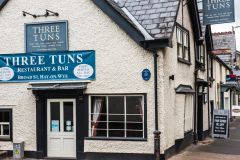 More self catering near Hay-on-Wye

The Agent's House Bed And Breakfast - 4.1 miles
Hereford, Herefordshire
From: £70.00

More bed and breakfasts near Hay-on-Wye

Self Catering near Hay-on-Wye