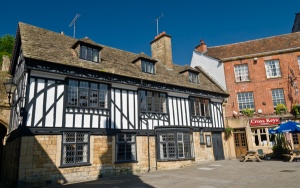 The Inner Tour should make for a nice day's drive - or an afternoon if you really hurry. The Outer Tour here deserves more of your time - perhaps two or three days. Of course, these tours can easily be combined to suit your preferences and interests.

Weymouth (Budmouth Regis)
Hardy worked as an architect here in 1869-70, and the town features in Under the Greenwood Tree.

Hardy worked on the restoration of St. Andrew's church in 1863, and the church now hosts a permanent exhibition on Hardy's life.

Swanage (Knollsea)
Hardy lived in Swanage in 1875-6 and it was here that wrote The Hand of Ethelberta.

Bournemouth (Sandborne)
Tess lived here with Alec d'Urberville, and the town also features in The Well-Beloved and Jude the Obscure.

Poole (Havenpool)
In The Mayor of Casterbridge, Newson landed here on his return from Newfoundland. The town features in two poems, The Chapel Organist and The Mongrel.

Salisbury (Melchester)
In Jude the Obscure, Jude worked at Salisbury Cathedral, and Sue and Phillotson were married in St. Thomas Church. Sue attended the Teacher Training College as did Hardy's two sisters in real life. It was at nearby Stonehenge that Tess was arrested in Tess of the d'Urbervilles.

Marnhull (Marlott)
Just outside the village is Tess Cottage, thought to be the model for Durbetfield's home in Tess of the d'Urbervilles.

Sherborne (Sherton Abbas)
Giles Winterborne sold his apple trees in the Market Place here in The Woodlanders, and Sherborne Abbey also features in the novel

Melbury Osmond (Great Hintock)
Hardy's parents were married in the church here, and his mother grew up in a thatched house nearby. The Woodlanders final scene also takes place in the churchyard.

Beaminster (Emminster)
In Tess of the d'Urbervilles, Angel Clare's father was vicar here.

Bridport (Port Bredy)
Bridport is the setting for the story Fellow-Townsmen, and the nearby secluded harbour of West Bay is mentioned in The Woodlanders.

Portland (Isle of Slingers)
The Isle of Portland, joined to the mainland by the narrow strand of Chesil Beach, is the setting for The Well-Beloved.