The London Mithraeum (Temple of Mithras) 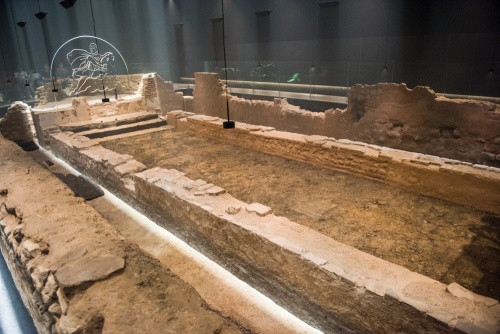 Discovery of the Temple

Discovered accidentally during construction work beside the Walbrook, London, this temple to the Persian god of light and the sun was moved to a site in Temple Court, Queen Victoria Street, so the workers could get on with the job. In 2012, after 58 years at Temple Court, the London Mithraeum, as it is often called, was returned to its Wallbrook site and re-erected on its original foundations.

Mithraea were generally built partly or completely underground, representing the cave in which Mithras was said to have slain the primordial bull, thereby unleashing the powers of creativity and life into the world.

Mithraism rose to prominence in the 3rd century AD, though its roots extend much further back. It emphasized courage, integrity, and moral behaviour, and became very popular with soldiers of the Roman army.

With its focus on a saviour, sacrifice, and rebirth, it was also a serious threat to early Christianity. It was exclusive to males, who rose through its seven levels by means of fearsome initiation ceremonies. 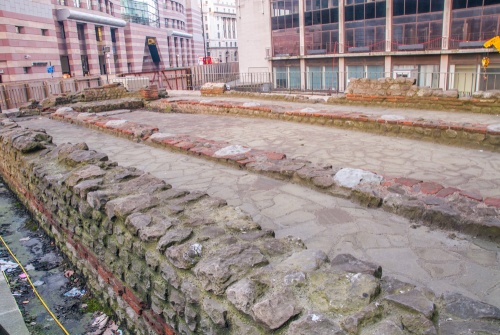 The Temple of Mithras uncovered

Mithraic observances differed from traditional paganism in that services were held communally, followers sitting on benches either side of a narrow nave leading to an altar. As befits a religion springing from the slaying of a bull, sacrifices were common in mithraic observance, as were shared meals of wine and bread, particularly on the festival of the 25th of December.

These latter two observances smacked of mockery to early Christians, who may well have sensed in Mithraism a serious rival. When Constantine the Great legitimized Christianity in 312 A.D. the Christians spent a good deal of energy knocking down everything mithraic in sight.

The Temple of Mithras was built some time in the middle of the 2nd century A.D. Within the temple were found likenesses of Minerva, Bacchus, and Serapis, imported from Italy. These are now to be seen at the Museum of London.

One final note; the form of temple used by Mithraism is the fore-runner of the traditional Christian church, with aisles flanking a long nave leading to an altar and an apse. The Christians may have been horrified at the thought, but architecturally, at least, they owed a debt of thanks to Mithraism. 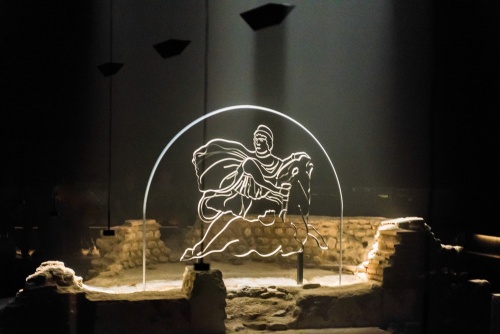 There are three parts to the Mithraeum. On the ground floor is a display of artefacts discovered during excavation, from Roman sandals to wooden writing tablets, an iron pendant in the shape of a bull, and a variety of pottery sherds. The range of finds is quite impressive. Visitors are given computer tablets to discover more about individual items.

The second part of the visiting experience is an underground chamber with displays about Mithraism, and what we know - or surmise - about Mithraic practises.

The final part of the Mithraeum visit is an underground chamber housing the ruins of the temple itself. You get to explore the temple as if you were attending a temple rite. The chamber is almost dark to begin with, and you can hear the sound of worshippers arriving and settling into their places. Then the lights go out and you are in total darkness.

Suddenly, with dramatic effect, you see light shining through a bull shape at the altar end of the temple. As far as historians know, the drama of light and dark was an essential part of Mithraic observance. The way the temple ceremony is presented really makes the world of the Roman Mithraic worshippers come to life in a way that simply displaying the temple ruins would not have done.

After the dramatic 'sound and light show' the lights are raised and you can see the full extent of the temple ruins. The most obvious feature is a raised altar area at one end, and a square lead-lined cistern to one side.

The Mithraeum is extremely easy to reach. The closest underground station is Cannon Street. From the station exit simply cross Canon Street itself to Walbrook and you will see the Mithraeum entrance on your left.

Only a small number of visitors are allowed to enter the Mithraeum at any one time, so if you visit at a busy time of day you may have to wait. You can avoid delays by booking a (free) visit time on the London Mithraeum website. 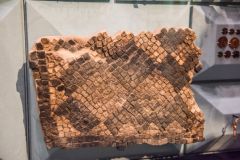 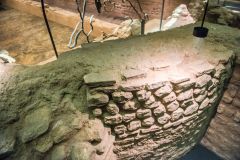 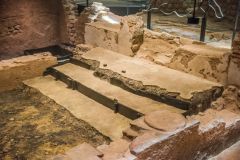 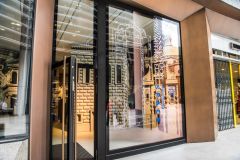 More self catering near London Mithraeum