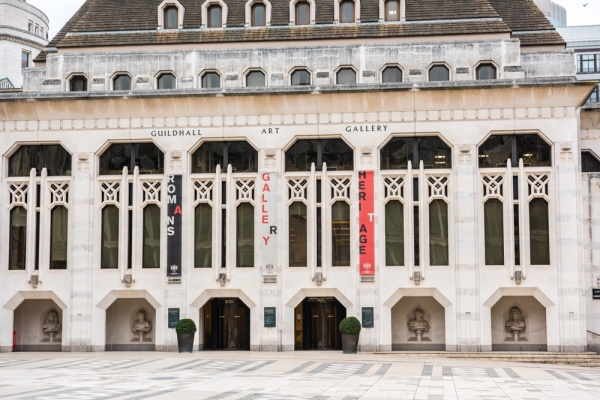 The Corporation of London has been collecting art since the 17th century when it commissioned portraits of judges given the task of assessing property damage and awarding compensation after the Great Fire of 1666.

Its collection now numbers over 4,000 works of art ranging from portraits of kings and queens to depictions of important naval battles, from period views of historic London to the work of contemporary artists. Since the Second World War, the Corporation’s collection has concentrated on London subjects.

The collection of the Corporation was housed in the Guildhall Gallery, beside the ancient Guildhall, since 1886. However, in May 1941 a severe airstrike left the Gallery unusable, and collection of art was put into storage. 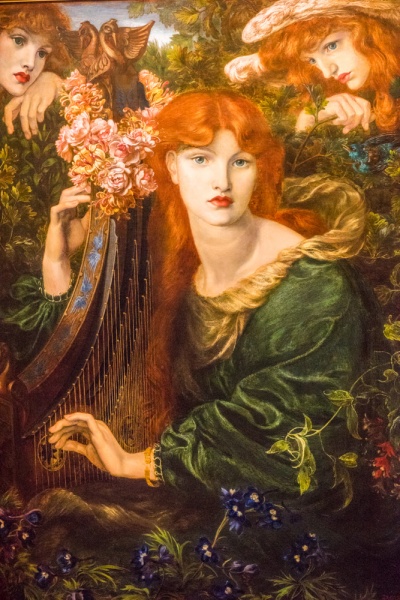 Well, the mothballs are gone. A new gallery has been opened on the site of the old one in Guildhall Yard. The gallery, designed by Richard Gilbert Scott, was opened by Queen Elizabeth in November 1999. The new gallery, built at a cost of over 70 million GBP, is especially strong in its selection of Victorian works by the pre-Raphaelites such as Millais and Dante Gabriel Rossetti, as well as by landscape genius John Constable.

Millais’s My First Sermon and My Second Sermon and Landseer’s The First Leap, as well as a large landscape by John Constable, Salisbury Cathedral from the Meadows, feature prominently, as does Britain's largest independent oil painting, John Singleton Copley's "The Defeat of the Floating Batteries at Gibraltar, September 1782", which has not been on public display since 1941.

Probably the most popular painting in the gallery is Rosetti's 'La Ghirlandata', an enigmatic portrait of a red-haired woman dressed in rich green, playing the harp while a pair of angels watch on. The angels were modelled by the daughter of William Morris, Rosetti's long-time friend. One of the gallery guides told us that the painting is so popular that when it went on loan they did not want to disappoint visitors so they put a print of the painting in its place, and people still congregated around the print as if it was the real thing!

Because the immense size of the Corporation's collection prohibits the display of the all its works at one time, the gallery rotates exhibits of 250 pieces at a time.

One of the most fascinating features of the Gallery isn't art at all, and it isn't found in the spacious gallery chambers. Rather it is what lies beneath the building. In the gallery basement are the extensive remains of a Roman amphitheatre discovered during building work on the new site. Stand where Roman gladiators fought, and see finds unearthed during construction. It really is fascinating stuff!

Do take the time to explore the Guildhall itself, immediately beside the Gallery, and the church of St Lawrence Jewry, just opposite.

Car: Due to parking congestion, the use of public transport is recommended 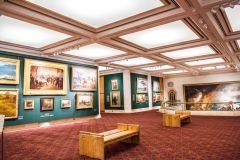 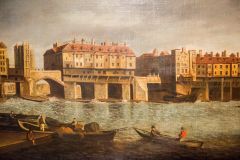 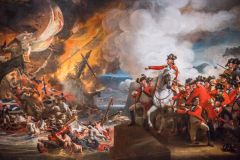 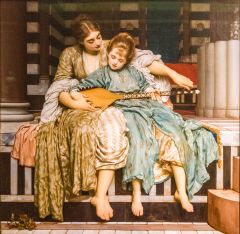 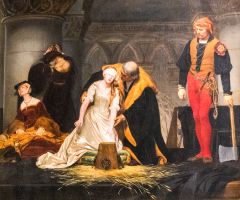 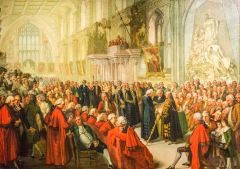 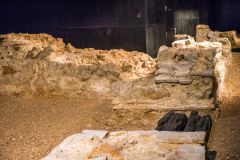