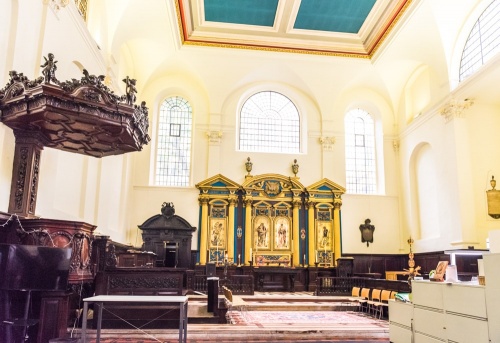 St Clement Eastcheap dates to at least the 12th century but was rebuilt by Sir Christopher Wren following the Great Fire of London in 1666. The total cost of the work was £4,365, though the parish records also mention 'one third a hogshead of wine, given to Sir Christopher Wren, £4 2s'.

By contrast to most Wren churches, it is simply furnished, even plain. Wren began work here in 1683 and the church was completed in 1687.

Wren's original design was altered in the Victorian period by Sir William Butterfield, who worked here in 1872 and again in 1889. Butterfield removed Wren's galleries and replaced the clear glass windows with stained glass. He also divided the reredos into three sections and installed polychrome tiles.

Then in 1932-34, the church was altered again when Sir Ninian Comper rebuilt the reredos in its original style and painted it in bright blues and gold. The church suffered minor damage during the Blitz, but this was repaired by 1950. 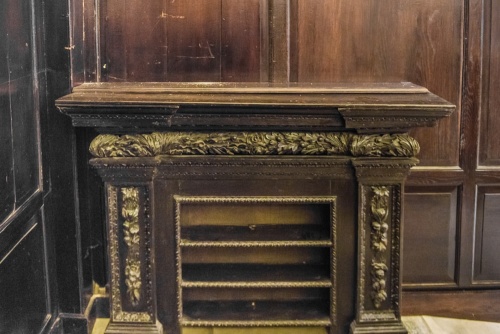 The bells of St Clements Eastcheap are immortalised in the famous nursery rhyme, 'Oranges and Lemons'. They are the bells referred to in the line 'Oranges and lemons say the bells of St Clements'. At least, that is the church's claim, but St Clement Danes church, further west on Fleet Street, also claims to be the church mentioned in the rhyme. It is entirely possible that the name refers to neither church, but was used only because 'St Clement's' rhymes more easily with 'lemons'.

The first record of bells comes in 1552 when three 'great bells and one sancts (sanctus) bell' are mentioned. The bells were not badly damaged in the Great Fire, but a new bell was cast in 1687 for Wren's church. It was replaced by the present single bell in 1829. The bell was cast in the previous year (1828) by T. Mears of London.

There are two churches in London dedicated to St Clement, a 1st century Bishop of Roe who was martyred by being tied to an anchor and cast into the Black Sea to drown. This link to the sea led to Clement being adopted as the patron saint of sailors. 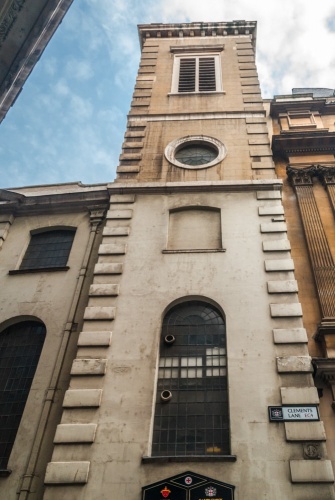 The dedication to an early Roman saint and the church's location near the docks that served the Roman city of London suggests that the church had a Roman origin. Roman foundation walls and tessellated pavements have been found under Clement's Lane, supporting this theory.

A charter of 1067 mentions a church dedicated to St Clement, and this might refer to St Clement Eastcheap, but the first direct record of a church here comes in a charter from the reign of Henry III (1207-1272). The charter refers to St Clement Candlewickstrate, and other early records call it St Clement the Little by Estchepe (Eastcheap). Prior to the Reformation, the parish was under the patronage of the Abbot of Westminster. It later passed to the Bishop of London, and still later the Bishop shared the patronage with the Dean and Chapter of St Paul's.

The most controversial rector of St Clement's Eastcheap was Benjamin Stone. Oliver Cromwell considered Stone 'too Popish' and had him removed from office and cast into prison. He had to pay the considerable sum of £60 to gain his freedom. Stone was reinstated as rector after the Restoration of the Monarchy. 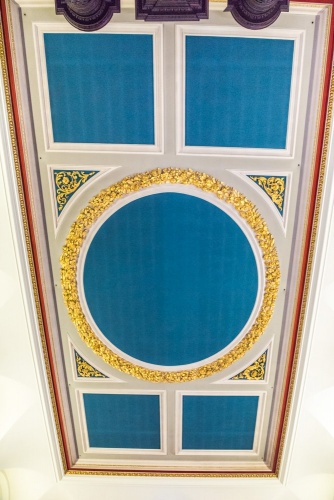 The memorials of several late rectors are set on the south wall. Outside the church on Clement's Lane is a memorial to Dositej Obradovic (1742–1811), a Serbian writer and politician who lived in a house beside the churchyard in 1784.

Highlights inside the church include the organ, which sits rather precariously above the entrance. The organ case dates to 1696 and the organ itself has been rebuilt multiple times over the centuries. A former church organist was Edward Purcell (1689-1740), the son of Henry Purcell, the 17th-century composer. Edwards son, Edward Henry Purcell, succeeded him as organist.

The altar and reredos are both original 17th-century designs by Sir Christopher Wren. The pulpit and sounding board are 17th century, made from Norwegian oak. Looking for the delightful cherubs carved onto each corner of the pulpit.

Near the west entrance is a slender marble font with a beautifully carved 17th-century cover. The cover is designed with gilded wooden arms in the shape of flames, sheltering a dove holding an olive branch. The Victorian politician William Gladstone was so taken with the font cover that he brought his grandchildren to see it.

Look for the Lord Mayor's sword rest, bearing the coat of arms of Sir Thomas Dakin, a spectacle maker who served as Lord Mayor of London in 1870. 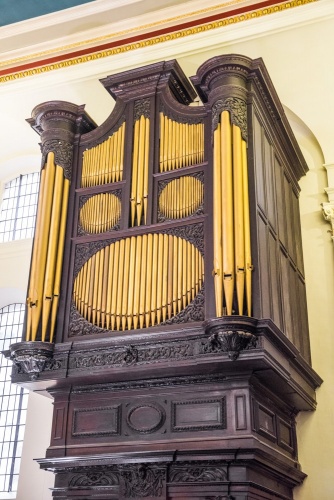 Tucked away in the south-east corner of the church is a 17th-century bread shelf. Bread was kept on these shelves for giving to the poor, usually as the result of a charitable gift given by a wealthy parishioner. We do not know exactly when the bread shelves were made, but they appear to date to Wren's original church.

A few steps from the bread shelves are modern toilets, built up against the panelled south wall. If you examine the corner of the toilet chamber you will find some early 18th-century graffiti, including a large 'WS' with the year '1703'. The friendly church guide told me with a grin that it was a shame the '7' wasn't a '6' or they could claim the graffiti was carved by William Shakespeare!

Visiting the church is a bit of a peculiar experience, since the nave is now home to a modern office for charitable organisations, with computers and cubicles for workers. The workers must be used to visitors, though, as they completely ignored my presence as I walked through their office to explore every corner of the church! 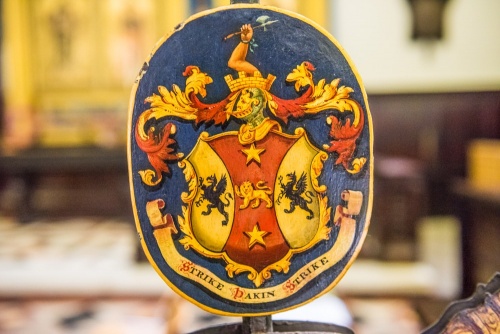 Coat of arms on the Lord Mayor's sword rest

This leads to a pedestrian subway under Eastcheap road, emerging on the north side of the road. From there simply turn right onto King William Street and immediately right again onto Clements Lane, and you will see the church on your right.

The church is regularly open to visitors and was open when we visited. 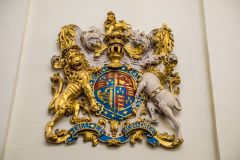 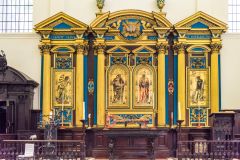 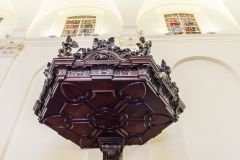 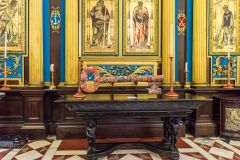 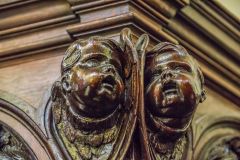