On the south side of Guildhall Yard, facing the historic London Guildhall, stands one of London's most intriguing historic churches, St Lawrence next Guildhall.

There has been a church on this site since at least the 12th century, probably around 1136.

The church took its name from a Jewish community that lived nearby during the early medieval period. The Jews came to London at the time of the Norman Conquest and were expelled from England by Edward I in 1290.

The medieval building was the official church of the Corporation of London, the city administration, which met at the Guildhall just a few paces to the north.

The medieval building was restored and new windows added in 1618, but sadly the building was destroyed in the Great Fire of London in 1666. Sir Christopher Wren began work on a new church in 1670 and it was finished seven years later. The result was one of Wren's most expensive city churches, a fact reflected in the richly decorated interior.

Wren's new church was designed with a richly decorated interior; with white walls contrasting with dark wooden screens and furniture. Like many of his other London churches, there are few right angles.

Wren's church was badly damaged during the Blitz in 1940 but was meticulously rebuilt to his original design. One oddity is that the church register of baptisms did not burn in the bombing; it was made of vellum, so the heat made it shrink rather than burn. You can see the very peculiar shrunk vellum on display.

From that point on St Lawrence ceased to be a parish church and served solely as the official church for the City of London. It hosts regular events and ceremonies involving the Lord Mayor of London as well as concerts and organ recitals.

Wren's 17th-century interior is perfectly augmented by a huge modern organ made by Johannes Klais Orgelbau. This is considered one of the great organs in the world today. It was paid for by the City Livery Companies.

The WWII bombing destroyed Wren's original eight bells, but 25 cwt of metal was salvaged from the wreckage and re-used to cast a new set of eight bells cast at the famous Whitechapel Foundry.

The windows are in Wren's original style, with white glass surrounding central figures by artist Christopher Webb, who used the same techniques as glassmakers in the 15th century would have used.

Near the pulpit is a window depicting St Thomas More, who was born in Milk Street, just a few steps from the church. In 1501 More gave a series of lectures in St Lawrence Jewry on the theme of the relationship between government and the Church. Nearby is a window commemorating William Grocyn (1446-1519) an eminent scholar who acted as More's tutor. Grocyn was the vicar at St Lawrence from 1496-1517.

One other window is worth a mention. It is tucked away in the vestibule at the back of the church. Here you see figures of Sir Christopher Wren and Grinling Gibbons, his master carver, along with Edward Strong, his master mason.

The church has several exceptional oak screens, as well as a wrought-iron screen in the Commonwealth Chapel, made by the Royal Marines.

The church is regularly open weekdays and for special events such as an annual music festival in August offering daily lunchtime concerts. It is well worth visiting, especially since you can easily combine a visit to St Lawrence with a visit to the Guildhall, its excellent art gallery, and the Roman amphitheatre discovered under Guildhall Yard during building of the Gallery. Look for the outline of the amphitheatre marked in the paving stones of the Yard, just outside the north wall of the church.

NB. The official name of the church is 'St Lawrence Jewry next Guidhall', which certainly makes sense, given its location almost on top of the historic Guildhall. 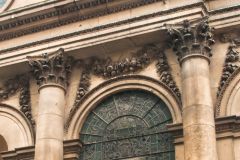 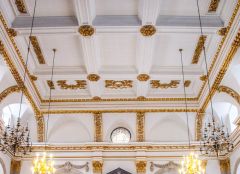 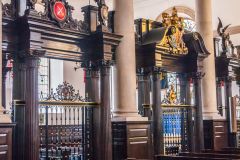 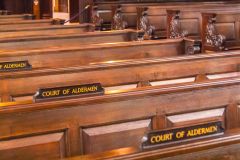 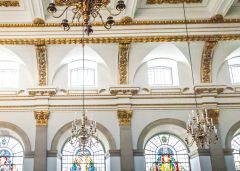 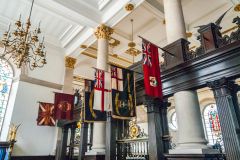 More self catering near St Lawrence Jewry next Guildhall

More bed and breakfasts near St Lawrence Jewry next Guildhall