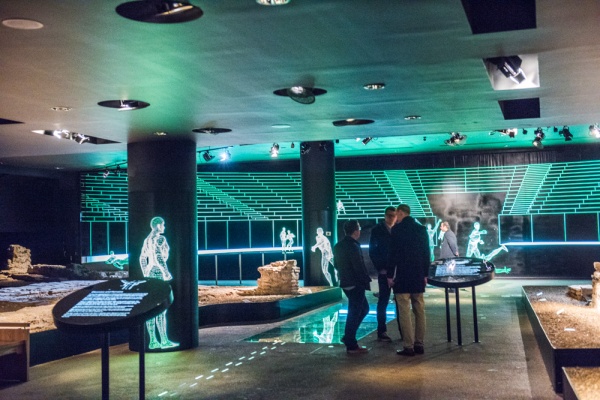 One of the hidden delights of historic London lies beneath the pavement of Guildhall Yard, lost from view. Under the ground lies the remains of a large Roman amphitheatre, lost for hundreds of years until it was rediscovered in the 20th century.

The amphitheatre was probably built around AD 74. It was enlarged and comprehensively renovated around AD 120, and remained in use until around AD 360. It must have fallen out of use by the late 4th century, as there is evidence that stone was being robbed from the site for other building projects by that time.

The site lay neglected in the post-Roman period, but by the early medieval era, new buildings began to be erected on the site. At first these new buildings were simple timber houses, but sometime in the 12th century the first Guildhall was built to serve as a centre for civic administration. 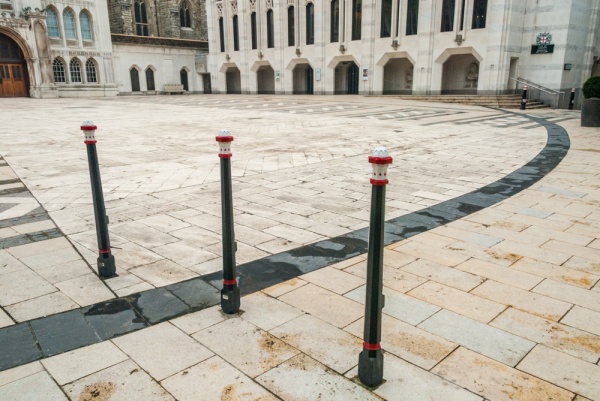 Black stones mark the outline of the amphitheatre in Guildhall Yard

How was the amphitheatre used?

The scale of the London amphitheatre is a measure of Roman London's importance as a provincial capital city. The amphitheatre would have been the main centre for entertainment in Londonium, and would have been viewed as a mark of civilsed life under Rome. One of those 'civilised' delights was gladiatorial combats and executions. As many as 6000 people watched gladiators fighting in the arena, at a time when the total population of London was below 30,000 people.

What is unusual is that the amphitheatre is located inside the Roman walls, close to the fort. Only 5 other amphitheatres across Britain have been found where there is such an obvious link with the military; most amphitheatres were civilian, and located outside city walls.

The amphitheatre is not circular, but oval, measuring roughly 105m long and 85m wide. The entire structure is under Guildhall Yard and its surrounding buildings.

The shape of the amphitheatre affected the layout of London's streets. Streets established in the 10th and 11th centuries were clearly routed in order to avoid the amphitheatre remains. An area roughly corresponding to the amphitheatre has been an open space, or yard, since at least the 14th century. 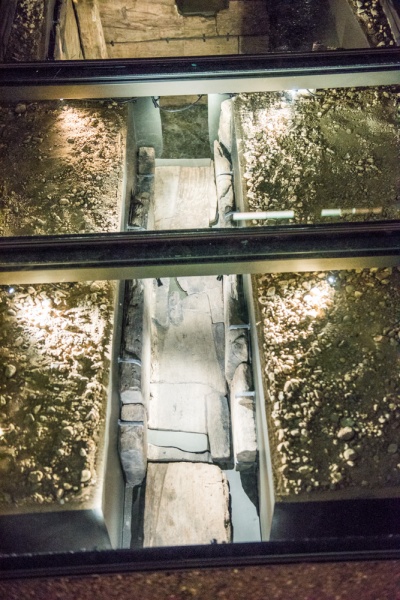 The amphitheatre was uncovered during preparations to build the Guildhall Art Gallery to display artwork owned by the City of London. The site has been excavated on at least three occasions; in 1951, 1985, and 1987-8, all under the direction of the Museum of London. The amphitheatre lies roughly 8m underground, under centuries of rubble and rubbish that gradually raised the ground level.

One of the most remarkable features of the amphitheatre is that so many timber features have been preserved. The waterlogged conditions under Guildhall Yard helped preserve wooden remains that would ordinarily have rotted away under dry conditions.

Excavations revealed an outer wall, banked to provide seating in tiers, sloping down to an inner wall encircling the area floor. The main entrance was in the east, and on either side were small chambers probably used as changing rooms, or perhaps as shrines. These chambers may even have been used as holding pens for wild beasts used in the gladiatorial combats.

Excavations also uncovered several drain channels lined with wooden planks, leading to a sump chamber. Remarkably, much of the timber drains have been preserved. They can be viewed through plexiglass set into the floor. You can also see timber thresholds leading to side-chambers and even some of the sand from the original arena floor. 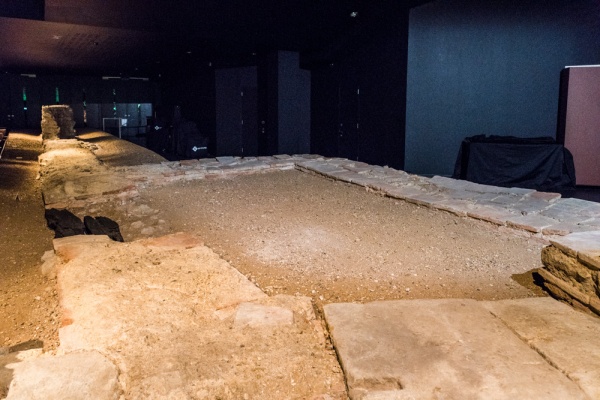 A small chamber beside the entrance

Access to the Roman Amphitheatre is through the Guildhall Art Gallery on the east side of Guildhall Yard. Having said that, your visit to the amphitheatre really begins before you enter the Gallery. If you look at the paved surface of Guildhall Yard you'll notice that the paving is made up of different coloured stones. An arrangement of dark stones follows the contours of the underground amphitheatre beneath your feet, and you can begin to get a sense of just how large and impressive it was.

After you enter the Guldhall Gallery (and go through security measures) you go down a flight of steps to a viewing area looking down into the dimly-lit underground amphitheatre. Here you will find display cases of objects found during excavations, such as pieces of Samian ware pottery. There are also several information panels giving an overview of the amphitheatre and its history. Then you go down another set of stairs into the amphitheatre itself. 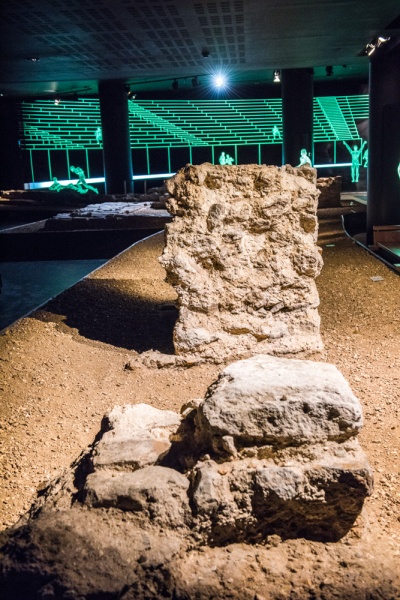 Only a part of the curving arena and its walls are available to explore, and the far side of the site is taken up with a large artwork showing banks of spectators looking down into the arena. The designers of the display have done a remarkable job of recreating the atmosphere of the original site; no mean feat when you consider that the entire structure is underground and much of it is still buried beneath the surrounding buildings.

The really impressive thing about the amphitheatre is the timber-lined drains and sump. It is extraordinary how well they have been preserved after almost 2000 years.

It will not take long to explore the site; even though the original amphitheatre was huge, the exposed portion open to visitors is relatively small. It is well worth taking the time to explore the Gallery - thankfully above ground and well lit! There are also regular chances to explore the site with a Museum of London archaeologist and to enjoy handling some of the treasures unearthed during excavations. 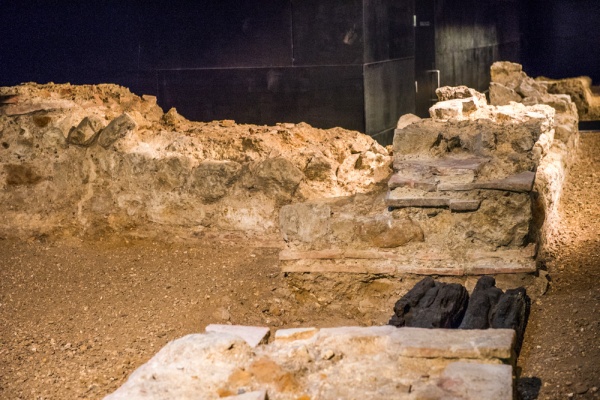 A side chamber with timber threshold