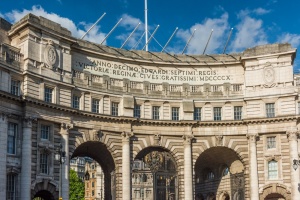 The terrific population growth of the late Victorian period continued into the 20th century. In 1904 the first motor bus service in London began, followed by the first underground electric train in 1906, but perhaps more notable was the spate of new luxury hotels, department stores, and theatres which sprang up in the Edwardian years, particularly in the West End. The Ritz opened in 1906, Harrod's new Knightsbridge store in 1905, and Selfridges in 1907.

New entertainment venues sprouted like mushrooms; with the London Palladium the largest of some 60 major halls for music-hall and variety shows.

Although the hardship of London during the Second World War is well known, it is easy to forget that WWI brought hardship as well to the city. In the autumn of 1915 the first Zeppelin bombs fell in London near the Guildhall, killing 39 people. In all, 650 fatalities resulted from bombings during the "War to End All Wars".

Population surged after the war, to about 7.5 million in 1921. The London County Council began building new housing estates, which pushed further and further out into the countryside. Unemployment was high, and labour unrest erupted in the 1926 General Strike. So many workers joined the strike that the army was called in to keep the Underground and buses running, and to maintain order. 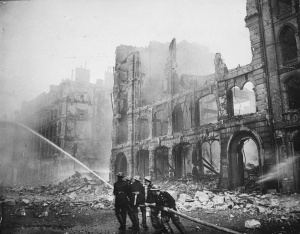 London firefighters in the Blitz

In the 1930s large numbers of Jews emigrated to London, fleeing persecution in Europe, and most of them settled in the East End. The year 1938 saw movement out of the city; the threat from Germany was great enough that large numbers of children were moved out of London to the surrounding countryside.

The outbreak of WWII precipitated the defining moment of the century for Londoners - the Blitz. During the dark days of 1940 over a third of the City was destroyed by German bombs, and the London Docks largely demolished.

Some 17 of Christopher Wren's London churches were badly damaged. The area worst hit was the City itself, but strangely, St. Paul's Cathedral suffered only minor damage.

Some 16 acres around the area that now houses the Barbican development and the Museum of London were totally flattened, and numerous historic buildings were destroyed. The death toll was heavy; 32,000 dead and over 50,000 badly injured.

In the post-war period heavy immigration from countries of the old British Empire changed the character of the city. Notting Hill acquired a large Caribbean population, Honk Kong immigrants settled in Soho, Sikhs in Southall, and Cypriots in Finsbury.

The Festival of Britain took place in 1951 on the centenary of the Great Exhibition of 1851. Whereas that first exhibition had left the legacy of the extraordinary Crystal Palace, the Festival left behind it the universally reviled concrete mass of the South Bank Arts complex. 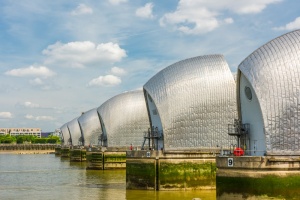 Heathrow airport opened to commercial flights in 1946, and the first double-decker red buses (dubbed the Routemaster) appeared on London roads in 1956.

The London Docks declined after the war, and the formerly bustling area around the Isle of Dogs fell into disuse until rescued by modern development in the last decade.

Between 1972-82 the Thames Barrier was built to control flooding along the river. This amazing engineering feat consists of 10 moveable underwater gates supported by 7 shining steel half-domes strung across the river.

The last great building project of the century was the controversial Millennium Dome, an exhibition centre beside the Thames in North Greenwich. The Dome, which opened on January 1, 2000, is a massive complex, built at a cost of over 750 million GBP. It houses, among other things, sponsored exhibits on the human experience of life, including Faith, Science, and biology.