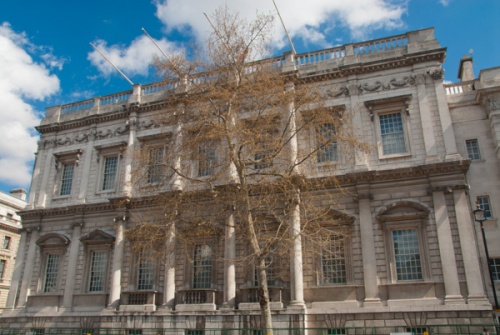 Built by Inigo Jones for James I from 1619, Banqueting House was the only major part of Whitehall Palace to survive a devastating fire in 1698. Jones's work was considered to be his masterpiece.

This is not the original banqueting house at Whitehall - that honour went a wooden structure built in 1581 by direction of Elizabeth I. That early structure was used as a kind of multi-function chamber for royal receptions and dining. During the reign of James I, it was also put to use for court masques, a form of theatre, which was then popular.

A subsequent Banqueting House burned down in 1619, providing an opportunity for Inigo Jones, then Surveyor of the King's Works, to undertake one of his first major architectural projects.

This he did in some style. He abandoned the precedents of English Gothic and Tudor tradition in favour of an Italian-influenced design incorporating classical elements; Composite orders topping Ionic in tradition Roman classical style.

Jones really began the fashion for classically-influenced architecture in Britain, a fashion that would influence centuries of stately home architecture and find its way into thousands of public buildings throughout the country over the next 250 years or more.

Originally the facade used a mix of Portland stone, with Oxfordshire and Northampton stone for the ashlar work. This latter was prone to crumbling, and was replaced by Portland stone in the 19th century, a fact which gives the exterior more uniformity than Jones's original design. 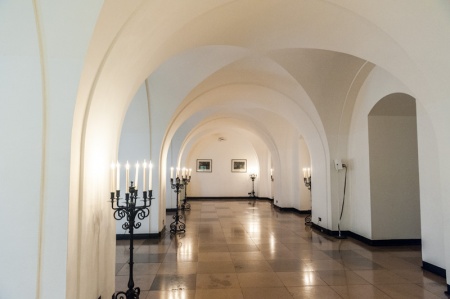 The Banqueting House is essentially a huge hall, like a basilica, with heavy walls supporting a chamber of double-cube proportions (think of it as two exactly equal cubical spaces joined together).

The interior is devoid of extraneous decoration, save for timber galleries which must have been ornamental only, forcing spectators to view performances from floor level. But then, Banqueting House was not built with pure functionality in mind, rather it was a statement of grandeur and prestige for James I. The first court masque at Banqueting House was performed on Twelfth Night, 1622.

A masque was like a play, albeit a very formulaic one, and James and his son Charles I loved them. The kings, queens, and leading nobles often took roles in the performance, which emphasized the positive effects of kingly rule and the role of the monarchy. A masque was more than light entertainment; it was a political and philosophical statement.

Inigo Jones was called on to create elaborate sets for the masques, using his architectural talents to design painted scenery panels and backdrops. In fact, Jones seems to have been asked to do more work on masques than on architecture for the king. 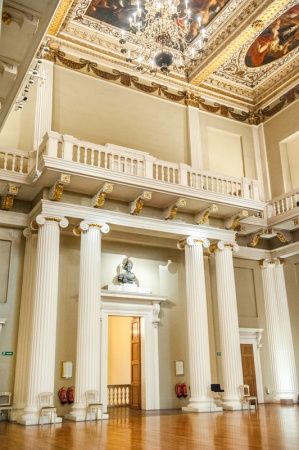 The wonderful painted ceiling was added by order of Charles I in 1636. Charles employed Peter Paul Rubens to create the ceiling as a memorial to his father James. Rubens was visiting Britain in his role as an ambassador, but Charles seized the opportunity of having one of the foremost painters in Europe in his kingdom to commission the artist to create an opulent ceiling of nine panels separated by ornately gilded borders.

The nine panels were much more than a memorial to James I; they emphasized the role of the monarch in providing peace through stability, showing James as a great leader, aided by classical deities in bringing peace to the kingdom.

The ceiling at Banqueting House is an astonishing work of art, but it is an even more remarkable statement of belief in the Divine Right of Kings, a belief that would soon bring Charles into conflict with Parliament. As for Rubens, he was paid 3000 pounds for his work, an astronomical amount of money at the time.

The addition of the ceiling panels signalled the end of court masques at Banqueting House, as Charles considered the panels too delicate to risk. The masques were illuminated by candles, and the candle smoke would have damaged the paintings.

Charles did not have long to enjoy his creation, however, and in 1649 he was beheaded in front of Banqueting House, stepping to his execution through the large first-floor windows to the scaffold.

In the early 19th century James Wyatt added a staircase at the north end of the building, and for many years it served as the museum of the Royal United Service Institution. Minor renovation and restoration projects since have altered the original building very little. 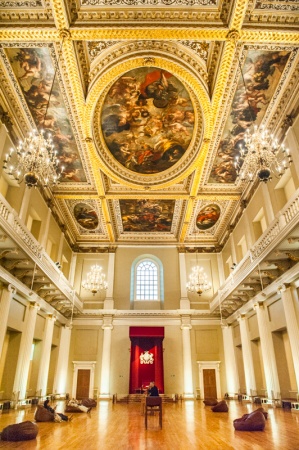 Banqueting House seems almost forgotten, ignored by the hordes of visitors that cluster around the entrance to Horse Guards and have their photo taken beside one of the mounted guards on duty at the gates.

Yet if you cross Whitehall to the Banqueting House, you're in for a treat. There is a short introductory film in the vaulted cellars beneath the hall. It is worth looking around the cellars, which were part of Inigo Jones' original design for James I.

Then you mount stairs to the first floor and go directly into the hall itself. This is a cavernous chamber, long and high, with classical, gilded pillars supporting the astonishing painted ceiling high above.

At one end is a large throne under a canopy, a reminder that this was very much a royal establishment, and still forms part of the Historic Royal Palaces collection of buildings, along with Kew Palace and Windsor Castle. There are very handy mirrors placed around the hall so you don't have to crane your neck to see the ceiling, and an audio guide tells the story of the symbolic imagery detailed in the panels.

The most striking panel shows James I, surrounded by classical deities, trampling instruments of war. Here, in a nutshell, is the central message Charles I wanted to drive home; the monarchy brings stability, and with it, peace and prosperity. To work against the monarchy is to destroy stability, peace, and prosperity.

Of course, we know with the hindsight of history that Charles' philosophy was doomed to fail, but the ceiling is a fascinating glimpse into the 17th-century mind of a king!

You could simply gawk at the ceiling and be done with Banqueting House in 5 minutes, but I do really recommend you listen to the audio guide and take time to examine the painted panels; they really are extraordinary! 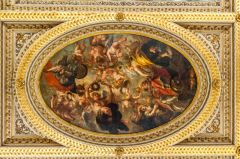 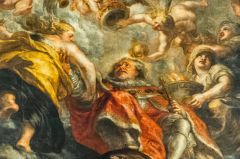 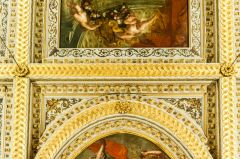 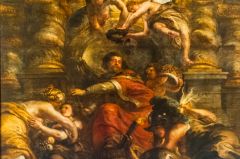 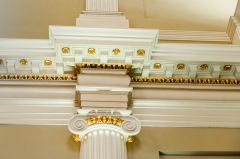 More self catering near Banqueting House