HERITAGE HIGHLIGHTS:   One of the best-preserved brochs in Scotland 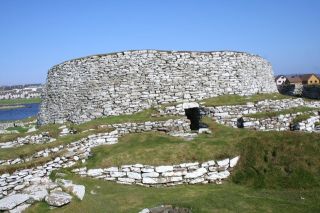 Clickimin Broch
The well-preserved remains of an Iron Age Broch and a later wheelhouse stand on a narrow neck of land jutting into Clickimin Loch, south west of Lerwick.
History
The history of the Clickimin site is complex, consisting of multiple phases. The first settlement here was a small farmstead built in the late Bronze Age, around the 7th century BC.

In the 5th century BC, the farmstead was replaced by a large, circular farmhouse built by Iron Age newcomers to the islands.

Then a new wave of Celtic settlers arrived in Shetland in the 4th or early 3rd century BC, and the Iron Age circular house was replaced with a complex block-house within an encircling ringwork defended by a stone wall.

The stone-walled fort was in turn replaced by a broch tower in the 1st century AD.

By the 2nd century, the need for a defensive structure like the broch seems to have passed, and the tower was reduced in size, and a large wheelhouse erected within its walls. Secondary structures including storage pits, outhouses, and cattle stalls were built inside the old stone walls. Finds from this last phase of building include Roman glass beads, now in the Shetland Museum in Lerwick. Other finds on the site included carved whalebone objects, stone lamps, and whetstones.

To sum up the historical timeline; there were 5 main phases of occupation, beginning with a Bronze Age farmstead, replaced in turn by a circular Iron Age house, a defensive enclosure complex, an Iron Age broch, and finally, by a large wheelhouse.

It helps to keep these different phases of construction mind as you view the site. The broch walls are roughly 20 metres across, with an interior diameter of 9 metres. Access to the broch is through the blockhouse, and within the entrance passage is a small 'guard cell'.

Within the broch you can see 2 chambers built into the thickness of the walls at ground level. On the second level there is a mural stair and gallery, and a pair of entrances. Inside the broch walls are remains of timber post holes.

This is a fascinating site, though the structures have quite obviously been restored recently to stabilise the buildings and enable visitors to get a clear sense of the site's history. The site is managed by Historic Scotland, and the exterior can easily be viewed, but for interior access you have to get the keys from a local keyholder (get the current number from the Historic Scotland website).

Nearby accommodation is calculated 'as the crow flies' from Clickimin Broch. 'Nearest' may involve a long drive up and down glens or, if you are near the coast, may include a ferry ride! Please check the property map to make sure the location is right for you.