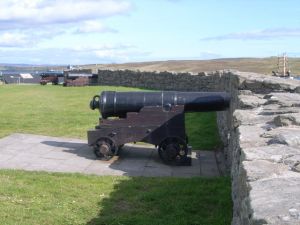 Fort Charlotte
Fort Charlotte is a substantial artillery fort begun in 1665 to guard the Sound of Bressay from the threat of invasion during the Second Dutch War. Despite the high and massively constructed walls, the Dutch took Fort Charlotte in 1673 and burned it to the ground.

The first defences here were erected during the First Anglo-Dutch War in 1652. That first fort was swept away a decade late during the Second Dutch War when the present fort was begun. The fort was never completed, however. It was never garrisoned and saw no action during the conflict. In 1673, during the Third Dutch War, the Dutch came ashore at Lerwick and burned the abandoned garrison block.

The fort was not rebuilt until 1781, during the American War of Independence, and it is largely the 18th-century defences we see today. This third fort on the site was named in honour of Queen Charlotte, wife of King George III.

This time the fort was garrisoned and housed 270 soldiers from the Earl of Sutherland's Regiment. The fort was garrisoned again in 1793 during the Anglo-French conflict, with 100 soldiers of the Orkney and ShetlandFencibles stationed here. The Fencibles were disbanded after four years and were replaced by the newly formed Shetland Fencibles, who were in turn disbanded in 1815.

None of the fort's guns was ever fired in action and they were removed in 1855. After that, the fort was used for a variety of purposes including a courthouse and gaol, a coastguard lookout, a customs house, a Royal Navy Reserve armoury, and a drill hall.

The fort is pentagonal in layout, with bastions projecting from each of the five sides. Replica guns have been created to give a sense of how the fort would have appeared in the 1780s. The guns occupy a battery defended by a zig-zag parapet wall and face Bressay Sound.

Nearby accommodation is calculated 'as the crow flies' from Fort Charlotte. 'Nearest' may involve a long drive up and down glens or, if you are near the coast, may include a ferry ride! Please check the property map to make sure the location is right for you.