HERITAGE HIGHLIGHTS:   Mysterious oval building - what was it used for? 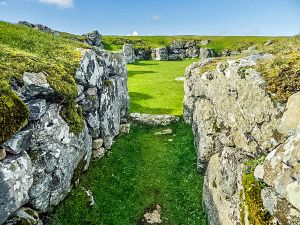 Staneydale is an intriguing Neolithic hall, or ritual temple, containing a large oval chamber, surrounded by the ruins of stone houses and cairns.
What is Stanydale?
The Stanydale site defies easy description. It was originally thought to be a temple; a site for ritual observance, but is it? The Temple stands in a landscape of prehistoric stone houses, but it is twice the size of any other house. So was it simply an extremely large house; the equivalent of a manse compared to the lower status houses nearby? Or was it perhaps something more, such as a communal centre for ritual observance like a temple, or a form of village hall? Archaeological finds include pottery sherds, burnt grains of barley, and remains of sheep and cattle.

The nearby stone houses span a huge range of time, from 3000 BC to around 500 BC. From the houses you can see the ruins of stone walls marking field boundaries.

The Temple itself may have been built between 2500-2000 BC, at the beginning of the Neolithic period in Shetland's history. Finds of pottery suggest that is was occupied - though perhaps not continuously - from the Bronze Age into the Iron Age (roughly 500 BC).

The Temple site consists of thick stone walls enclosing an oval space. The interior of the Temple is roughly 10 by 14 metres (about 35 by 45 feet). The Temple walls are from 3-4 metres thick and there is a small guard chamber outside the doorway. There are 6 shallow recesses, or niches in the internal walls, like small room dividers, or perhaps, storage areas.

The Temple stands in a field stretching to about 8 acres, surrounded by a stone wall. Aside from the Temple, there are 2 ruined houses, and about 30 piles of stones cleared from the soil.

In the centre of the building are a pair of post pits, suggesting that there was originally a timber-framed roof supported on posts. One of the post holes showed evidence of spruce, probably a piece of driftwood carried to Shetland from Scandinavia. There were also traces of Scots pine, presumably more driftwood from North America. Driftwood was essential to building in a treeless environment like Shetland, and archaeologists have estimated that it would have taken some 2300 square feet of driftwood to build the Temple roof.

The entrance passage appears to have had a pair of timber doors. Outside the entrance is a forecourt in a wide crescent shape.

Note: the approach to Staneydale can be very wet, so please wear good waterproof footwear! The temple site is 3 miles south west of Bixter, off the A971. Access is marked by a line of coloured poles.

Images are copyright as noted, and are republished with gratitude under a Creative Commons license

Nearby accommodation is calculated 'as the crow flies' from Stanydale Temple. 'Nearest' may involve a long drive up and down glens or, if you are near the coast, may include a ferry ride! Please check the property map to make sure the location is right for you.