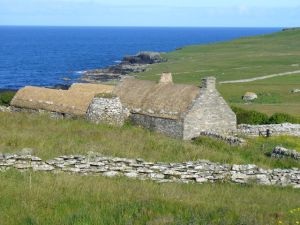 Shetland Croft House Museum
This picturesque croft house gives a picture of mid-19th-century rural life in an environment where the menfolk tended to fish while women and children worked the land. This cottage at Boddam was in use until the 1960s and has been maintained to show how a typical 19th-century crofting family would have lived.

The simple thatched stone cottage is split into two ends; with sleeping quarters at one end and a kitchen at the other. The living area is joined under a single roof to a barn and a byre, so that the family occupied one end of the building and their livestock occupied the other. The family quarters are divided into two parts; the 'Ben end' with a sleeping area and the 'But end' with the kitchen and living area.

Everything within the cottage was made with material collected from the area, including even the kitchen appliances. Self-sufficiency was a necessary way of life for crofting families in this often harsh environment.

Behind the croft house is a conical kiln, while in front of the house is a restored mill building, also with a thatched roof.

The Croft House Museum offers modern visitors a glimpse into the harsh world of 19th-century crofeters in Shetland.

Nearby accommodation is calculated 'as the crow flies' from Shetland Croft House Museum. 'Nearest' may involve a long drive up and down glens or, if you are near the coast, may include a ferry ride! Please check the property map to make sure the location is right for you.