HERITAGE HIGHLIGHTS:   The only restored bod in Shetland 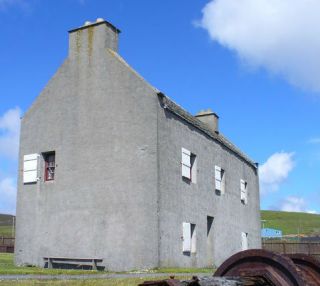 Bod of Gremista & Shetland Textile Museum
The 18th-century birthplace of Arthur Anderson, co-founder of the P & O Shipping Company, is now restored as a museum dedicated to the history of weaving and textile heritage in Shetland. Two rooms have been fully restored to the way they looked 2 centuries ago, with an exhibition on Anderson and the Shetland whitefish industry.
Arthur Anderson was born here in 1792 and as a child, he worked on the nearby beach helping to cure and preserve fish. He was impressed into the Royal Navy in 1808 and served 10 years before becoming a clerk in a London shipping firm. In 1830 he helped start the Peninsular Steam Navigation Company, soon to become P&O. The P&O became the largest commercial steam shipping company in the world. Anderson served as an MP for Orkney and Shetland, founded local charities and schools, launched the Shetland Journal newspaper, and helped foster trade between Shetland and the UK mainland.

A bod, or booth, is a dwelling used by fishermen to live and to store gear while fishing nearby. The Bod of Gemista was built in the 1780s and stands 3 storeys high. It is a listed building and a lovely example of a traditional Shetland dwelling. It is the only Bod in Shetland to be restored to its original state and provides a unique opportunity to experience this type of traditional building.

The entrance was through a door in the gable end leading to a salt store, used for curing fish. Also on the ground floor was the kitchen area, now the museum's reception area, and a food preparation area, which now holds the Weaving Room with a working loom. On the second floor, the Anderson family had their living area. This is now used as the museum's exhibition and Design Room, while the upper floor is used by the museum as administration offices and archive storage.

Shetland is famous for its fair isle knitting patterns, but also had a thriving knitted lace cottage industry in the 19th century. Arthur Anderson presented Queen Victoria with some knitted lace stockings -- suddenly everyone wanted a pair of lace stockings from Shetland. Other knitted lace items produced were bed jackets and christening shawls. The shawls were made of wool so fine they could be passed through a wedding ring.

The museum holds a permanent collection of traditional knitting patterns and about 700 historic and contemporary knitted and woven garments and other artefacts.There is a changing programme of temporary exhibits. Past exhibits include a look at the traditional knitted gensey, worn by British fishermen from the 19th century or earlier. Another exhibit traced how World War One changed Shetland's hand-knitting industry, and yet another explored the relationship between Shetland knitters and the Royal family.

There is also a shop, featuring local, hand spun organic wool as well as fair isle sweaters, knitted lace, buttons, woodwork and other items, all one-of-a-kind items crafted locally. This is a community museum, run entirely by volunteers.

Nearby accommodation is calculated 'as the crow flies' from Bod of Gremista & Shetland Textile Museum. 'Nearest' may involve a long drive up and down glens or, if you are near the coast, may include a ferry ride! Please check the property map to make sure the location is right for you.