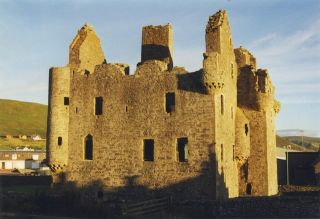 Scalloway Castle
Scalloway Castle is a castellated mansion built in 1600 by Patrick Stewart, the notorious Earl of Orkney, and later used as a courthouse and place of execution.
History
The Stewart Earls of Orkney had a reputation for being among the cruellest and rapacious lords in Scottish history. In 1592 Patrick Stewart inherited the Earldom of Orkney, which included the lordship of the Shetland Isles.

The Earl's power base was on Orkney, but he wanted a stronghold to control his territory of Shetland as well, so in 1600 he began to build a fortified house at Scalloway, using as his architect Andrew Crawford, who also built Muness Castle. The new castle was meant to serve several purposes; not only was it a residence, but a statement of power. That statement was emphasised by an inscription over the main entrance that translates as 'Patrick Stewart Earl of Orkney and Shetland. That house whose foundation is on a rock will stand but if on sand it will fall. AD 1600'. It is somewhat ironic, then, that Stewart's own stand was short, if eventful.

The castle also served as a courthouse, a place to dispense justice, if any justice was to be had in the Earl of Orkney's domain. So not only did it have residential chambers, but a suite of public rooms. The layout is similar to the unfinished Earls Palace at Kirkwall, with an L-shape design, with kitchens and storage areas at ground level, and a great hall on the first floor. A private suite of rooms for the Earl plus accommodation for guests occupied the top two floors. Most of the windows have gun loops, a testament to the violent world Stewart lived in.

Earl Patrick was a harsh lord; he and his bands of supporters ruled the islands of his northern estates with a fist of iron. So harsh and tyrannical was his rule that the islanders called him 'Black Patie'. It was claimed that the mortar used to build Scalloway Castle was partly made from the blood and hair of the Earl's tenants. But the Earl's reign of terror did not last. In 1609 he was arrested and imprisoned in Edinburgh. He was executed in 1615.

After the Earl's death, the castle was used for local administration. The Bishops of Orkney used the castle twice to hold court. Troops were stationed here in 1653, and it stayed in use until at least 1733, but after that point administration moved to Lerwick, and Scalloway fell out of use. Stone was taken away to build the Haa of Sand, an 18th-century mansion.

Current opening arrangements
The exterior can be viewed at any time. Keys to the castle interior can be obtained from the Scalloway Museum during regular opening hours.

Nearby accommodation is calculated 'as the crow flies' from Scalloway Castle. 'Nearest' may involve a long drive up and down glens or, if you are near the coast, may include a ferry ride! Please check the property map to make sure the location is right for you.