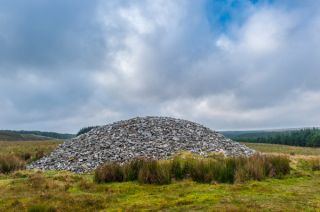 The Grey Cairns of Camster are a pair of Neolithic chambered cairns (circa 2000-3500 BC), one round and the other linear, in a secluded hollow near the River Wick. The Camster cairns are considered among the best preserved in Britain and have been carefully restored so that visitors can access the inner chambers.
The round cairn was originally surrounded by kerb stones, but these have now been lost. The inner chambers are beautifully constructed, with overlapping stones creating a corbelled roof, and large upright stones dividing the interior into three sections. Remains of several skeletons were found in the chamber and passage, along with burnt bones, pottery, and tools.

The long cairn stretches nearly 70 metres (over 210 feet). There is a pair of burial chambers, both at the north end of the cairn, and both accessed from the east. One chamber is divided into three parts, like the round cairn, but the other is much cruder, with a single polygonal chamber formed by large slabs.

Why Here?
The cairns are quite unusual in that they are built in a hollow, a low area of land near the source of the River Wick. Most similar burial cairns were built on high ground, where they would be a prominent feature in the landscape, or with views of the sea. At Camster neither is true, so why were the cairns built here? One theory is that the site was significant because it was close to the river source. Another more general theory is that the site held special significance because it had been settled for a long time. Excavations have uncovered remains of human activity here thousands of years before the cairns were built, so perhaps the site held a special place in the culture of the cairn-builders. 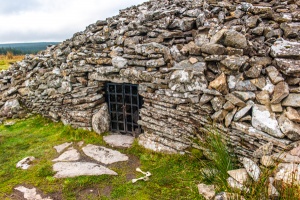 The round cairn entrance
Visiting
There are boardwalks across the low, marshy ground to the cairns. The entrance to the round cairn is protected by an iron gate, and it isn't immediately obvious that you can slip out the locking pin and enter the passage that leads into the cairn. Once I'd figured out this was possible I quickly realised that the only way to proceed was on my hands and knees; which is rather awkward while carrying a camera!

The passage surface is sharp gravel, so if I had one piece of advice to fellow visitors it would be to wear old trousers and gloves! I didn't have it as badly as a French governess, who upon visiting the site in the 1880s, got stuck going down the passage and refused to return the same way. Her fellow visitors had to get a ladder and help her climb up through the hole in the cairn roof!

Thankfully the passage is not long, and you soon reach the centre where you can stand upright. The light is fairly good, due to a modern skylight, and you can easily make out how the interior chambers were formed, with large slanting stones at the rear, and large upright dividers forming separate cubicles.

The long cairn is up a slope from the round cairn, and this, to my mind, is the more interesting of the two cairns. The long cairn is surrounded by a curious stepped plinth, or low stone wall with a platform on top. The plinth is extended at each end of the cairn to form a horned forecourt area. This stepped construction is apparently the subject of controversy among archaeologists, with some suggesting that the original layout was nothing like the reconstruction we see now.

Certainly, I've visited a lot of ancient burial mounds around the UK, and I can't remember ever seeing anything like the Camster construction before. It is very unusual, as is the shape of the long cairn, which looks as if a pair of round cairns were simply covered by a later mound of stones to create a linear arrangement. Each of the two cairn passages can be entered (the same caveat about gravel and awkward hands-and-knees progress holds true here as well!) I found the interior of the long cairn even more filled with light than the round cairn, so if you only fancy crawling into one of them, go for the long cairn!

I loved Camster; the location is superb; on a grey, overcast day it feels like you've stepped back in time several thousand years; the site is so evocative of history and age. Whether or not the reconstructed cairns are exactly as they would have looked when built is a question for the archaeological experts, but for us mere mortal visitors, it is a fabulous ancient site. The cairns are signposted off the A9 near Lybster (about 5 miles). 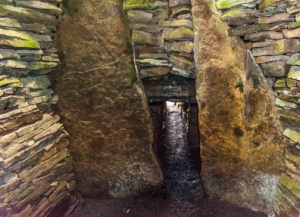 The round cairn interior 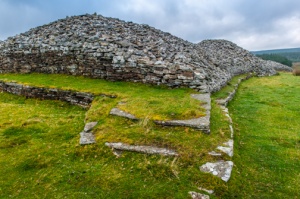 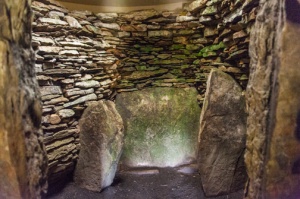 Interior chamber of the long cairn 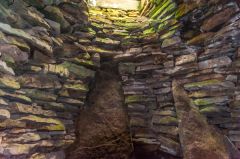 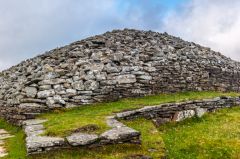 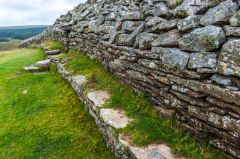 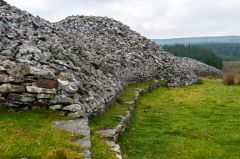 Nearby accommodation is calculated 'as the crow flies' from Grey Cairns of Camster. 'Nearest' may involve a long drive up and down glens or, if you are near the coast, may include a ferry ride! Please check the property map to make sure the location is right for you.

More self catering near Grey Cairns of Camster >>

More bed and breakfasts near Grey Cairns of Camster >>