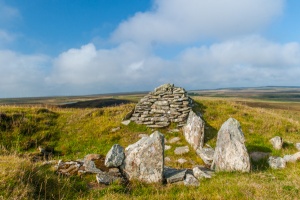 This wonderful circular trail links three Neolithic long cairns, two round, chambered cairns, a hill fort, a standing stone, Bronze Age hut circles, and an Iron Age broch. The trail begins near South Yarrows Farm, and though there is no 'correct' way to follow it, I'll describe the route in a counter-clockwise direction, heading uphill from the parking area outside the farm.

To start the trail you have to go through a farm gate and head north west, to where the remains of a chambered cairn are obvious on the low crest of the hill. The top of this cairn has been exposed, so you can easily see the inner chamber.

The cairns at Yarrows probably served several communities and were in use for roughly 1000 years. They have a central burial chamber reached by a passage. The inner chambers are subdivided into several parts by large upright stones.

The route then turns south, following the line of the ridge, to a long cairn. This was covered in bracken when I visited in late September, but it is still a very impressive monument, with an exposed burial chamber to the east, and a long, tapering mound stretching west. 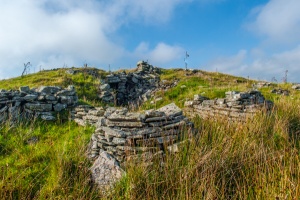 One of 2 long cairns on the Trail

From this cairn the trail keeps on south, down a dip and then up, skirting the obvious escarpment which supports the Warehouse Hill hill fort. The trail does not go through the fort itself, so if you want a closer look from within the fort you will need to turn aside from the trail.

The route turns south east, towards three very obvious monuments very close to each other on small hillocks. The first is a solitary standing stone, just inside a farm fence. This dates to the Bronze Age, like the hut circles in the valley below. It was once larger, and you can see broken pieces on the ground around its base.

This stone is slightly off the path, so beware of wet ground! Carry on over a stile to the first of the round cairns. The views from this point are outstanding if the day is clear.

Carry on to the very obvious second round cairn on the neighbouring hillock. From this point you can deviate from the route if you are feeling adventurous, heading for Warehouse Hill and Cairn of Get, but that route is quite a bit more indistinct at the moment, though I gather that plans are afoot to enhance this optional, longer loop of the walk. Instead, follow the black and white striped poles down towards the south end of the Loch of Yarrows, very clearly in view.

Cross over a small stream, and be careful, for the ground becomes quite wet in places. As you approach the south end of the loch the trail passes beside several Bronze Age hut circles.

These may be difficult to spot at first, until you realise that the grass grows a different colour around the perimeter of the huts, marking their outline very clearly against the surrounding ground cover. The huts were made with a circular foundation wall of stone, supporting a conical roof, with a fireplace in the centre of the living space. 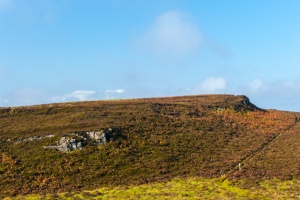 Carry on towards the south end of the loch. You cross over a stile, and though the loch and the farm are quite clear at this point, the trail is not, and the ground is very damp. Just keep to high ground, close to a rocky outcrop on your left, until you reach solid ground and the field below the farm. Cross the field to the obvious remains of the broch at the bottom of a fence.

Immediately beside the loch, at the bottom of the field below South Yarrows Farm, stands the ruins of one of the best-preserved and most beautifully located brochs in Caithness. The broch walls reach two metres high in places, and you can clearly see the passages and stairs built within the thickness of the walls.

The main entrance still has its door lintel in place, and you can see a small guard chamber to one side. Surrounding the broch are obvious remains of aisled buildings called wags. These were built in the later, Pictish era, and consist of a sunken floor, with upright stones holding a roof in place.

A word to the wise

Do take care! The trail is indistinct in places, and even on a clear day, I meandered about in confusion trying to find the way in a few spots.

South Yarrows Farm is within sight almost the entire circular route, but if the weather turns foul and you can't see the farm you may have trouble. Please take an OS map! I had one along and had to refer to it frequently just to make sure I was heading the right way.

There are regular black and white striped poles that mark the trail, and these are a great help, but the poles do not cover every twist and turn of the trail, and are easy to lose sight of in places. Also, it looks like there used to be an information panel in the parking area, but it was gone when I visited, and signage is non-existent over the course of the walk, so it can be hard to interpret the sites.

The trail is only two miles long and doesn't cover any great gain or loss of elevation, but it still took me two hours to complete. Of course, I did stop to take plenty of photos!

Now, don't let all those warnings put you off - I had a great time following the Trail, and I highly recommend it if you enjoy archaeology. Seeing so many prehistoric sites so close together is a real treat, and the landscape is simply stunning on a clear day. 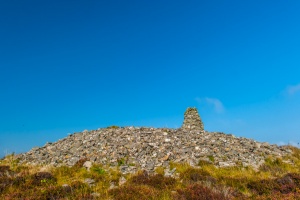 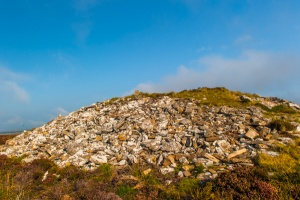 Another of the chambered cairns 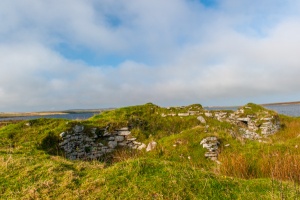 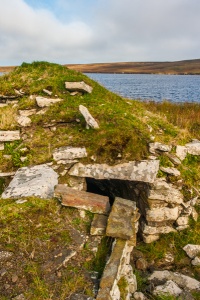 Mural passage inside
the broch walls 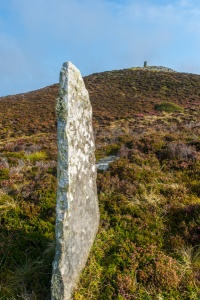 Nearby accommodation is calculated 'as the crow flies' from Yarrows Archaeological Trail. 'Nearest' may involve a long drive up and down glens or, if you are near the coast, may include a ferry ride! Please check the property map to make sure the location is right for you.