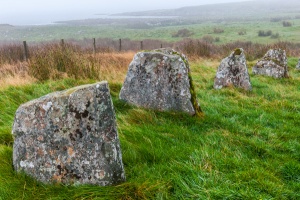 Set on a low rise above the south western tip of Loch Stemster is a peculiar setting of standing stones. The stones are unusual in several ways; the setting is not a circle (though Achavanich is sometimes erroneously called a stone circle). Rather, it describes a horseshoe shape, like the letter U. Another oddity is that the narrow side of each stone aligns with the centre of the U.

This is not completely unique in Britain; the famous trilithons at Stonehenge are set in a similar shape, but there are extremely few other examples of this shape anywhere else in the UK. The stone setting measures about 260 feet lengthwise, and 110 feet across, narrowing to 65 feet at the open end.

Thirty five stones can be seen standing, with another six fallen, and there is always the possibility that there were originally more stones. The tallest is about two metres high, with an average height around 1.5 metres. There is what may be a slight bank on the southwest side, suggesting an enclosure. 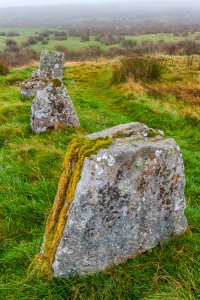 Looking along the stone row

In most stone circles around Britain, the broad face of the stones face into the centre of the circle, but at Achavanich they are turned 90 degrees to face along the stone row. The axes of the stone setting are aligned roughly northwest to southeast. The south-east end of the elongated oval is open, and there is no evidence to suggest that it was ever closed.

The stones were erected roughly 4000 years ago. That makes them comparative newcomers compared to a 5000-year-old burial mound that can clearly be seen a short distance to the south. What this suggests is that the Achavanich site had a special significance for local residents over a very long period of time.

The stones are Caithness flagstone and had to have been cut out of the underlying bedrock using simple stone tools. Remains of cremated bones have been found at Achavanich, suggesting some kind of ritual purpose.

I find it quite odd that the Achavanich site is not better known. Access is very easy; it is immediately beside the road! And the setting is marvellously atmospheric. There are no obvious signs off the A9, so I suspect many people simply whiz by in the cars and never know they are so close to a fascinating ancient site.

There are quite obvious signs at the site itself, and a small layby, plus several useful information panels explaining the layout of the site, the natural history of Loch Stemster, and tales of local residents. 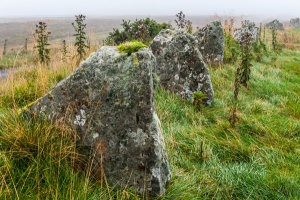 The stones are very similar in height 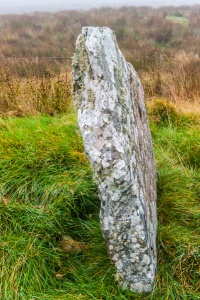 The stones face side-on
to the centre 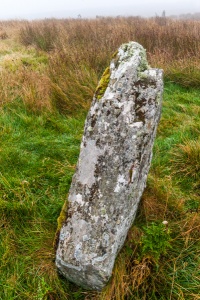 A stone leaning with age

About Achavanich Standing Stones
Address: Loch Stemster, Latheron, Caithness, Scotland, KW5 6DX
Attraction Type: Prehistoric Site
Location: On the minor road between Achavanich and Lybster, off the A9. There is a signed layby along the road and a path leading around the stones. Open access site. The nearest postcode for satnavs is KW5 6DX
Location map
OS: ND187417
Photo Credit: David Ross and Britain Express

Nearby accommodation is calculated 'as the crow flies' from Achavanich Standing Stones. 'Nearest' may involve a long drive up and down glens or, if you are near the coast, may include a ferry ride! Please check the property map to make sure the location is right for you.