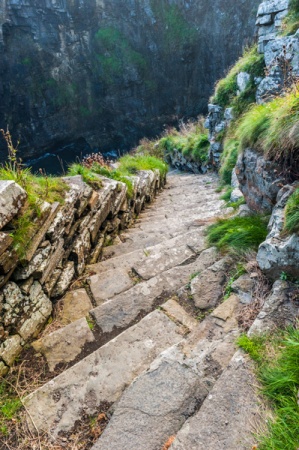 In 1786 Thomas Telford was hired to survey the coast of Caithness in search of good harbours as a base for the burgeoning herring fishery. When Telford came to Whaligoe he was dismissive of the potential of this narrow inlet, bounded by steep cliffs, calling it a 'dreadful place'. Telford moved on in search of better harbours, eventually settling on Wick, to the north, as the place to develop a harbour and fish processing works.

The name Whaligoe seems to have come from 'Holy goe', suggesting an origin in early Christian times ('goe' means a rocky inlet). However, over time the name has been linked to whaling; several whale jawbones have been erected in the area and it seems likely that the original meaning has been lost.

Telford may have dismissed the potential of Whaligoe, but Captain David Brodie was not convinced. Around 1793 he paid a local stonemason to create 330 stairs in the side of the cliff face, so that the narrow harbour at the bottom of the cliffs could be more easily accessed.

The Steps are made of Caithness flagstone, as is a stone balustrade, the only concession to safety. The Steps take advantage of natural unevenness in the cliff face and bend back and forth in a series of five hairpin turns. 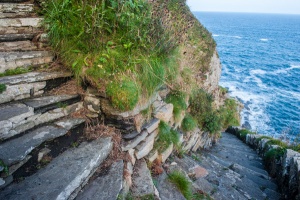 A hairpin bend on the way down

Old records suggest that there was originally another flight of steps leading down to the tide line.

But wait! Did Brodie actually have the Steps made? Perhaps not, for records from 1769 suggest that locals used steps here. It does seem that the Steps we see today were Brodie's brainchild, perhaps simply improving an existing set of stairs that were already in use.

The stairs zigzag down the cliffs to a narrow terrace just above the crashing waves. But how many steps are there? I confess I did not count, but locals dismiss the claims of the RCAHMS (Royal Commission of Ancient and Historical Monuments of Scotland) that there are 330 steps and insist that the correct number is 363, and Wikipedia says there are 365.

Whatever the exact number, the result is simply amazing, a set of worn stone steps that seem to be suspended above a sheer drop, high above the rocky inlet far below.

Be under no illusions; the Whaiigoe harbour was a dangerous place; narrow and difficult to access even with the steps. Yet because the Caithness coast offered so few natural harbours, Whaligoe was used frequently by fishermen.

The boats brought back herring, haddock, ling, and cod, which were unloaded at Whaliigoe and gutted by women on the small terrace known as The ink, above the harbour. The fish were then loaded into baskets and hauled up the steps to the top of the cliffs. They would then be transported to Wick for sale.

There was a cooperage at the top of the cliffs, and barrels from the cooperage were carried down the Steps and used for storing salted herring, which were then loaded onto ships for transport to market.

Even though the harbour was dangerous and the steps made transporting the fish arduous, Whaligoe was used by some 20 ships in the mid-19th century. Unfortunately, 14 of these were herring boats, and when the herring fishery declined in the late 1800s Whaligoe was gradually abandoned. Only five boats used the harbour by 1920, and it was completely abandoned by the 1960s. 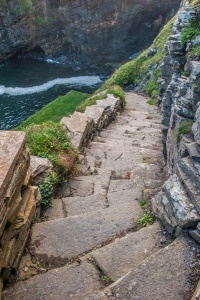 That was not the end, however, for the picturesque Steps were maintained as a visitor attraction, albeit one that requires a fair bit of gumption to access and enjoy! The steps themselves are not signposted from the A99, but the hamlet of Whaligoe is, and so is the cafe at the top of the cliffs.

There is a small parking area above the top of the steps, with a signed area for local residents, of which there are few. From there, a path leads past the Whaligoe Steps Cafe, a popular restaurant, to the top of the Steps. There are no information panels to describe the site, but then, you don't really need anything to distract you from the amazing and slightly unnerving beauty of the site.

Take care; the steps can be slippery in wet weather, and there are no safety features here beyond common sense. That said, anyone exercising reasonable care will have no trouble at all navigating the Steps.

It will take roughly five minutes to descend, and, depending on how fit you are, double that time to come back up. At the bottom you can see the ruins of a salt storage shed on The Bink, and a winch used to help haul boats up onto the rocky shore.

The Whaligoe Steps ought to be more widely publicised; this is an awe-inspiring site, and it is amazing to think of the effort it took to carve the Steps out of the rocky cliffs, but also of how hard life must have been for the men and women who worked here, and ascended these cliffs in good weather and bad. 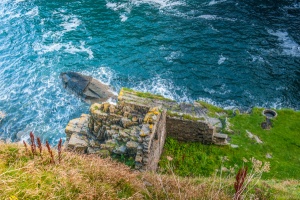 Looking over the edge to The Binks 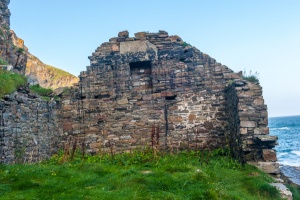 Remains of the salting building 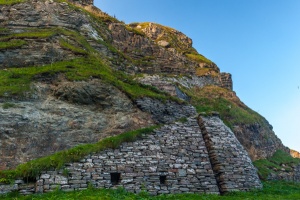 Looking up from The Binks

Nearby accommodation is calculated 'as the crow flies' from Whaligoe Steps. 'Nearest' may involve a long drive up and down glens or, if you are near the coast, may include a ferry ride! Please check the property map to make sure the location is right for you.

More self catering near Whaligoe Steps