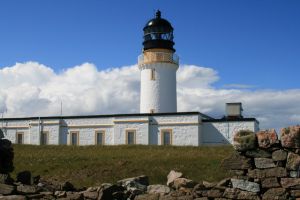 Cape Wrath is famous as the most north-westerly point in mainland Britain. The cape is a unique and isolated landscape area covering roughly 107 sq. miles of moorland, an area known as the Parph. It is cut off from mainland Scotland by the Kyle of Durness, and the only access is a passenger ferry crossing the Kyle.
The only road through the Parph was built by the lighthouse commission in 1828 to access the Stephenson lighthouse that stands at the top of the Cape Wrath cliffs. Most of the Cape Wrath area is owned by the Ministry of Defence and used for military training and as a firing range. The Cape's special habitat ha resulted in it being declared a Site of Special Scientific Interest (SSSI) a Special Protection Area, a Special Landscape Area, and a Special Area of Conservation.

Despite the name, Cape Wrath has nothing to do with anger. In this case, 'Wrath' comes from Old Norse meaning a turning point, suggesting that the Norse mariners used the cape as a landmark to tell them where to turn their vessels while sailing along the coast.

Despite its isolated location, Cape Wrath traditionally supported several small crofting settlements, but there are now almost no permanent inhabitants. For much of the last several centuries, the area has been used for sheep grazing, and this practice still continues. There are surprisingly few historic remains, though a possible prehistoric fort has been discovered at Eilean nan Coarach, east of the Cape Wrath headland.

The relative isolation of the area means that it has remained free from the negative effects of human population on wildlife, bird populations and landscape. Tere is a very large bird population, with large numbers of kittiwakes, gannets, fulmar, and golden eagles. Red deer also abound.

Significant landmarks include a sea stack known as The Cathedral or Stac Clo Kearvaig in Gaelic. The name comes from a pair of slender 'spires' and an opening like a window formed by erosion.

In 1828 Robert Stephenson, one of the famed family f Scottish engineers, designed a lighthouse to stand atop the cliffs. The lighthouse, now listed Category A for historic importance, stands 400 feet above sea level and can be seen for 22 nautical miles out to sea. From 1894 Lloyds of London erected a signal station to track vessels around the Cape. The station closed in 1932, though it was briefly reused during WWII as a coastguard station. s for the lighthouse itself, it was manned until 1998, before it was converted to run automatically by the Northern Lighthouse Board.

A new walking trail has been launched to cover the coat of Sutherland and Wester Ross. The trail begins at Fort William and heads west to Glenfinnan, before turning north and following the coast through some of Scotland's most beautiful scenery before ending at Cape Wrath after a distance of 200 miles.

Access to Cape Wrath is by passenger ferry across the Kyle of Durness, then by regular minibus service which runs May - September. Access may be limited by military training exercises, so it is good to check ahead. If you're feeling energetic, the trail from Sandwood Bay (part of the Cape wrath Trail) provides access from the south, though again the route may be blocked at times if there are military exercises underway. 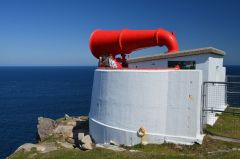 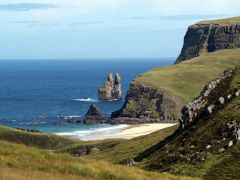 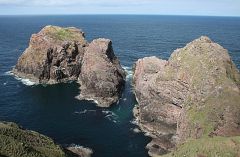 Nearby accommodation is calculated 'as the crow flies' from Cape Wrath. 'Nearest' may involve a long drive up and down glens or, if you are near the coast, may include a ferry ride! Please check the property map to make sure the location is right for you.

More self catering near Cape Wrath >>

With beautiful sea views and a cosy sitting room with open fire, this homely cottage makes a wonderful base for holidaymakers, regardless of the weather.
Sleeps 9