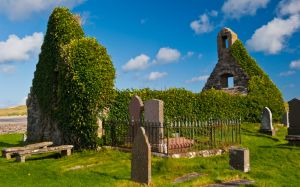 Balnakeil church is one of the most interesting historic sites in the northwest of Scotland. It stands at the western end of Balnakeil Bay, looking across a long sweep of sand dunes. The first church at Balnakeil was founded in the early 8th century by St Maelrubha, and it developed into one of the most important Celtic monasteries in the north-west of Scotland. It is one of the last vestiges of the pre-Clearance township of Balnakeil.

The present roofless church dates to about 1617. It was rebuilt in 1690, then abandoned to decay in the mid 19th century when a new church was built.

Just inside the church entrance, set into a niche in the wall, is the tomb of Donald MacLeod, better known by his Gaelic name Domhnull MacMhurchaidh or MacMurachie. MacMhurchaidh worked for the chiefs of Clan MacKay and lived near Eriboll.

He is said to have killed at least 18 people and disposed of the bodies by dumping them into the waterfall that runs down into the caves at Smoo. Apparently, he believed the local tale that the Devil lived below the falls and thence his crimes would never be discovered.

He certainly realised that he had made many enemies during his life, for when Uisdean Dubh MacKay, the second Lord of Reay, began rebuilding the church at Balnakeil, MacMhurchaidh paid the princely sum of 1000 pounds to be buried in a specially constructed vault within the church, so that his enemies could not desecrate his remains.

The tomb is worn, but there are striking carvings, including heraldic symbols, a huntsman killing a stag, a sailing ship, a fish, and a skull and crossbones. 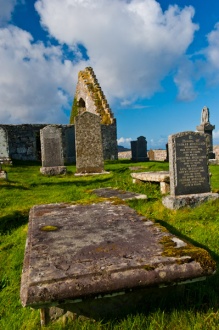 In the churchyard is a monument to the Gaelic poet Rob Donn, known as the Robbie Burns of Gaelic poetry, who was born near Durness in 1714. Donn, nicknamed 'Brown-haired Rob', may have been a MacKay, though this is uncertain.

He composed exclusively in Scots Gaelic, and never learned to speak English. He was patronised by Iain MacEachainn, a tacksman on Lord Redesdale's Strathmore estate. His poetry, sometimes composed of biting social commentary, was orally transmitted until the first written version appeared 50 years after his death.

Even then, the highly censored version of his sometimes bawdy verse could not diminish his reputation as one of the most important Gaelic literary figures. The monument, one of the largest memorials in the churchyard, was erected in 1827 and has inscriptions in Latin, English, Greek and Gaelic - an interesting combination!

Look also for the grave of Elizabeth Parkes, aunt of Beatle John Lennon. Lennon visited Durness frequently, and it is said that his song In My Life is based on his experiences in this area.

To reach Balnakeil church, simply follow the signs for Balnakeil from the southwestern edge of Durness, off the A838. There is a parking area at the end of the road, very close to the church. An interpretive panel tells more about the site, which is accessible at any time. 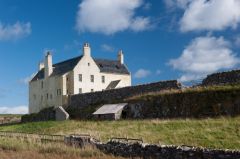 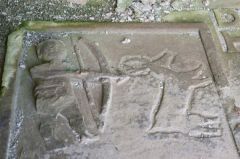 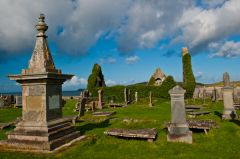 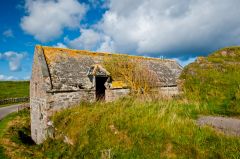 Nearby accommodation is calculated 'as the crow flies' from Balnakeil Church. 'Nearest' may involve a long drive up and down glens or, if you are near the coast, may include a ferry ride! Please check the property map to make sure the location is right for you.

More self catering near Balnakeil Church >>