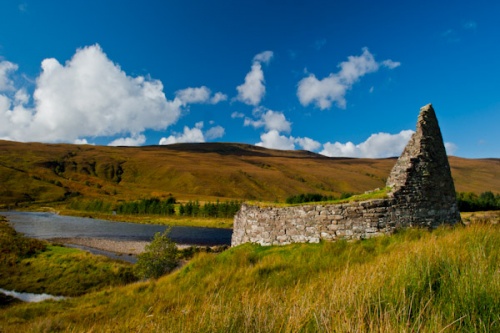 On a site beside the Strathmore River, south of the bulk of Ben Hope, stands the Iron Age circular broch of Dun Dornaigil. The broch is set in a wonderfully scenic - and bleak - location. The broch is very well preserved, with the walls still standing to a height of almost seven metres on the north-east side.

The most likely date of construction is sometime in the first century BC. The outer wall of Dun Dornaigil is the best preserved, but the interior walling has collapsed in places and is held up with modern supports. The walls vary from 2-3 metres thick. Within the thickness of the walls, a stone stair once led up to several stone galleries.

The dun is incredibly impressive in its semi-ruinous state so it is staggering to think that the ruin we see today stands only one-half its original height.

The broch has an unusually low entrance topped by a huge triangular lintel stone. The low entrance passage would have required any invaders to crawl, and they would have been picked off by defenders using spear holes in the passage roof.

The interior of the broch is filled with stone rubble from the walls and is inaccessible. It would originally have housed a courtyard covered by a thatched roof.

The exact purpose of duns like Dornagil is unclear; traditionally, historians thought they were defensive retreats, with their high stone walls providing protection from attack by neighbouring families. Some modern historians, however, challenge this 'practical' view of duns and suggest that they were status symbols, a demonstration of a tribe's wealth.

To reach Dun Dornaigil you need to take the narrow, scenic minor road down the east shore of Loch Strathmore.

NB The site is also known as Dun Dornadilla. 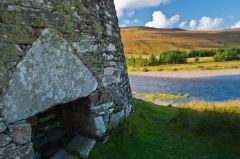 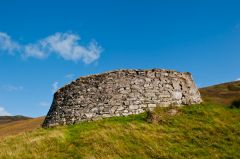 Nearby accommodation is calculated 'as the crow flies' from Dun Dornaigil Broch. 'Nearest' may involve a long drive up and down glens or, if you are near the coast, may include a ferry ride! Please check the property map to make sure the location is right for you.