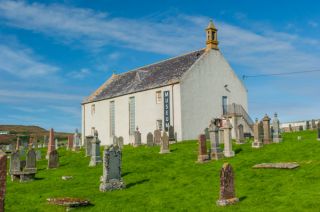 As you approach the village of Bettyhill, a road sign informs you that you are entering Mackay Country, for this area of northern Sutherland is the traditional home of Clan Mackay. So it should come as no surprise that one of the best features of the excellent Strathnaver Museum is the Clan Mackay Room, with a rich collection of memorabilia and clan history.

The museum is housed in the 18th-century church that once served this small Sutherland community. The church was built in the late 18th century, but the site was in use far earlier than that, as evidenced by the 9th century Farr Stone, which stands outside the east end of the church.

The Farr Stone is a beautifully carved cross slab combining Christian and Pictish symbols. The main design is a ringed cross, decorated with small panels. The stone may have marked the grave of an important person. Certainly, the three very small stones nearby appear to be gravestones and are of roughly the same age. 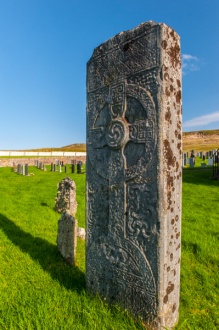 It is fascinating that the Farr Stone and the small grave markers were not moved to the church, but the church was built in a place that was obviously of some significance as a burial site for many centuries.

The main focus of the museum is the tragic tale of the Clearances and how they affected the people of Strathnaver. Part of the exhibit traces the history of a single family from Strathnaver over generations, from eviction to emigration.

The museum interior is full to bursting with objects of local history, geology, agriculture, and prehistory. Jumbled together are ancient Pictish stones dating to the 8th century, crofting equipment, letters, and old photos. There is a recreation of a crofter's house interior, with a box bed, and a cruck frame roof made from the hull of "The Thorwaldsen", shipwrecked in Strathy in 1838. The Thorwaldsen's figurehead is also on display.

The main museum room is dominated by the huge 18th-century pulpit, built in 1774. The pulpit bears the initials of Rev George Munro. It also has a tragic history, for it was from this pulpit in 1819 that Rev David Mackenzie read out the eviction notices that forced the crofters of Strathnaver from the homes they had lived in for generations. 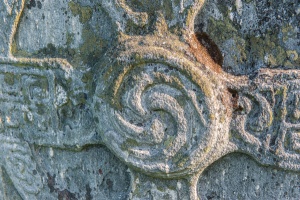 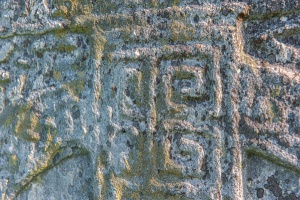 Decorated panel on the Farr Stone

Nearby accommodation is calculated 'as the crow flies' from Strathnaver Museum. 'Nearest' may involve a long drive up and down glens or, if you are near the coast, may include a ferry ride! Please check the property map to make sure the location is right for you.

More self catering near Strathnaver Museum >> 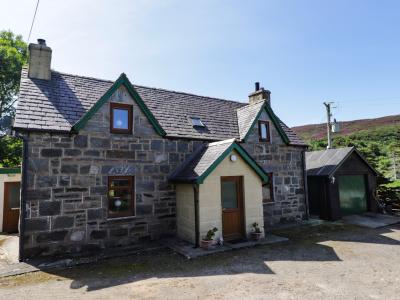 This charming detached cottage rests in Skerray near Bettyhill, Highlands and can sleep five people in three bedrooms.
Sleeps 5 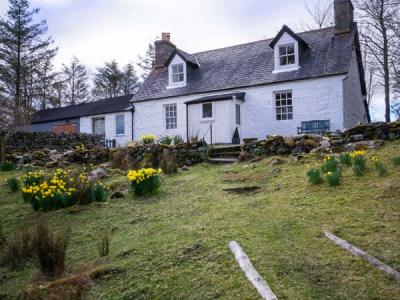 This charming, whitewashed cottage is near the village of Bettyhill in the Scottish Highlands and can sleep four people in two bedrooms.
Sleeps 4