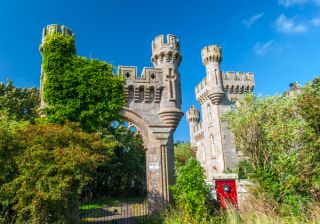 Castle Lodge was built beside the gatehouse leading to Thurso Castle in 1875. A fanciful example of Gothic Revival romanticism, the Lodge is an ornate building with a square block, tower and turrets like a fantasy medieval castle.

There was a castle in Thurso during the time when this area of northern Scotland was ruled by the Norse. The original castle was destroyed in the 12th century, but another fortification was built in the early 17th century by the Sinclair family.

Around 1640 the castle was enlarged by George, Earl of Caithness. Then in 1872 the earlier castle was swept away by Sir John Sinclair, 3rd Earl of Ulster, and replaced with a Gothic Revival mansion. The long drive to the mansion was fronted by a romantic, castellated gatehouse and tower, called Castle Lodge.

The Lodge has more in common with a folly than with an actual residence. It looks like something out of a Disney fairy tale, with turrets and battlements. It also, unfortunately, looks like it has suffered from the passage of time, but the combination of the Lodge and Gothic gatehouse make an eye-catching vision as you enter Thurso from the coastal road to Mey.

PLEASE NOTE: Castle Lodge is a private home. Be respectful! You can get an excellent view of the gatehouse and the Lodge exterior from the A836 so you can easily appreciate this excellent example of Gothic Revival architecture. 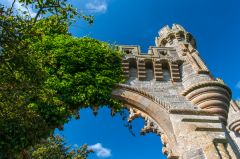 Nearby accommodation is calculated 'as the crow flies' from Castle Lodge. 'Nearest' may involve a long drive up and down glens or, if you are near the coast, may include a ferry ride! Please check the property map to make sure the location is right for you.

More self catering near Castle Lodge >>

This semi-detached cottage is set near the town of Thurso, in Scotland, and can sleep four people in two bedrooms.
Sleeps 4