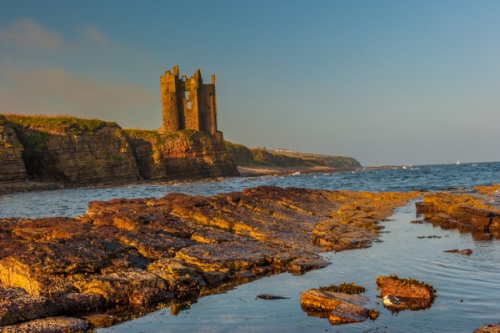 The striking ruins of this picturesque 16th-century tower house stand on the edge of a sheer cliff less than a mile beyond Keiss village, on the northern end of Sinclair's Bay. There was a fortalice, or small fortification here during the late medieval period, but in the last years of the 16th century the 5th Earl of Caithness built a new Z-plan fortified house on the site. The exact date of construction is unknown. 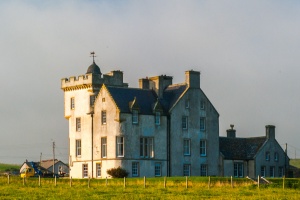 The Earl's new castle was 4 storeys high, plus an attic level and a vaulted basement. The original design had a pair of corner towers at opposite angles of a square central block. One of the towers had an internal spiral stair. There was a ground floor entrance leading straight into a small chamber joined to the stair, which rose to the 2nd floor, giving access to the main living areas.

A small projecting turret on the north side gave access to the upper floors. There was only one chamber on each level, and the walls are relatively thin for a fortified house, reaching just over 3 feet wide. There do not appear to be any defensive structures on the landward side, suggesting that Keiss was built purely with an eye to a seaborne attack.

The castle was certainly in existence by 1623, when Sir Robert Gordon led a royal force into Caithness on behalf of James I and VI. The 7th Earl of Caithness died at Keiss in 1698, but it must have been in pretty dire condition by then, for it was recorded as ruinous just 2 years later. 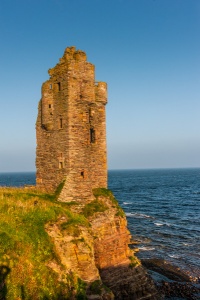 The original entrance was destroyed when the cliff face fell away, leaving the remainder perched dramatically over the precipice.

Old Keiss Castle stands within the grounds of 'new' Keiss Castle, which has an entrance drive on the A99 just north of the village. The drive is clearly marked 'private', so I don't recommend access that way! Instead, take the signed road from the centre of Keiss that leads to the harbour.

There is space for several cars to pull over just above the harbour. From there pass through a gate and follow a clearly marked footpath along the cliffs. The going is extremely easy and the romantic outline of the castle is visible in the distance along the entire route.

It takes no more than 15 minutes to reach the castle, and it is a lovely walk. A retaining wall has been erected on the landward side, due to cliff slippage, so please don't attempt to climb the fence and get closer! You can easily see the castle from outside the fence. With its striking towers and turrets, it truly is a picturesque ruin. Goodness knows what keeps it from slipping over the edge of the cliffs into the sea! 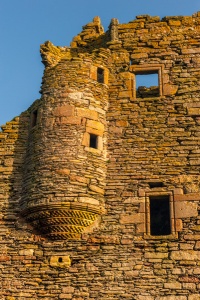 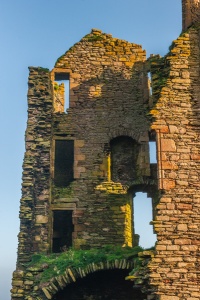 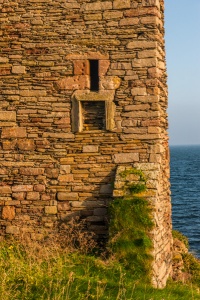 Base of the south
west corner 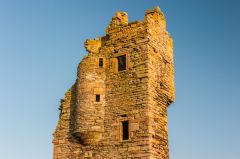 Nearby accommodation is calculated 'as the crow flies' from Keiss Castle. 'Nearest' may involve a long drive up and down glens or, if you are near the coast, may include a ferry ride! Please check the property map to make sure the location is right for you.

More self catering near Keiss Castle