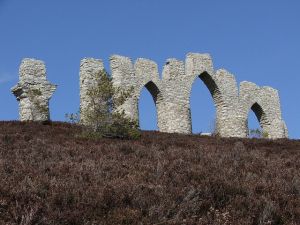 Gates of Negapatam (Fyrish Monument)
The Gates of Negapatam are a peculiar folly in the form of three battlemented arches with ruined pillars. 'The Gates' are also known as the Fyrish Monument. The monument is best seen from a distance, as it is a 40-minute climb to the folly.
History
The monument was built in 1782 atop Fyrish Hill near Alness, by Sir Hector Munro, the 8th Earl of Novar (1726-1805). Sir Hector had served with the British army in India, where he captured the port of Madras from the Dutch after a siege lasting 4 weeks. After his military service ended, he retired to Novar House near Evanton. Munro wanted a monument modelled on the Gate of Negapatam in Madras.

But the Fyrish Monument is much more than one man's self-aggrandisement. In 1782 the Highland Clearances were beginning to take effect, clearing people off land they had worked for centuries to make way for more profitable sheep raising. Local unemployment was high, and living standards low for the poor. Sir Hector's folly gave much-needed employment to local men, who received a penny a day for their labour.

According to local tales, Sir Hector even personally rolled building stones from the top of the hill to the bottom, just to give the labourers more work to do. And it was hard work, for the hill is some 1468 feet high, and each stone had to be carried to the top manually. It might be an apocryphal story, but it sounds good!

The result was a very Scottish version of an Indian monument, with a trio of central arches, the central arch slightly higher than the others, with ruined pillars to either side.

The hilltop site offers excellent views over the surrounding parishes of Alness and Kiltearn, and as far as the Cromarty Firth.

There is a signposted trail called the Jubilee Path to the Gates starting from a parking area to the northeast of Fyrish Hill, at grid reference NH627715. The parking area is off the B9176 Struie road while heading north. The trail passes through woodland and crosses a burn before emerging onto open hillside. You can't see the Gates until you are almost at the summit, but bear with it, and they will eventually come into view!

Nearby accommodation is calculated 'as the crow flies' from Gates of Negapatam (Fyrish Monument). 'Nearest' may involve a long drive up and down glens or, if you are near the coast, may include a ferry ride! Please check the property map to make sure the location is right for you.

The Royal Guesthouse - 7.5 miles
Dingwall, Highlands and Islands
From: £25.00

More bed and breakfasts near Gates of Negapatam (Fyrish Monument) >> This mid-terrace cottage lies in Swordale near Evanton and can sleep four people in two bedrooms.
Sleeps 4