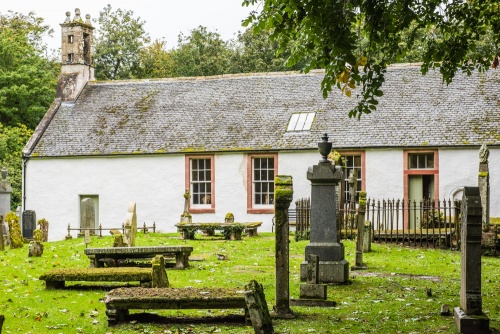 There has been a Christian presence at Nigg, on the north shore of the Cromarty Firth, since at least the 8th century, and there is documentary evidence of a church as early as the 13th century. The present whitewashed stone building was rebuilt around 1626 and boasts a 1624 bell brought from the Netherlands.

The church interior is typical of a Scottish country church, with galleries for the wealthy lairds and their families, a pulpit in the east with a desk below it for the precentor, who led the congregation in singing psalms.

In 1739 the Rev John Balfour served as the minister for Nigg. Under his ministry, Nigg became a centre for Evangelical meetings; gatherings of parishioners for weekly prayer meetings. Some of these meetings were led by lay ministers known as Na Daoine (The Men). Some of the Na Daoine were thought to possess supernatural powers and the gift of prophecy. The most famous Man of Nigg was Donald Roy, who lived to the age of 105 and died in 1774. 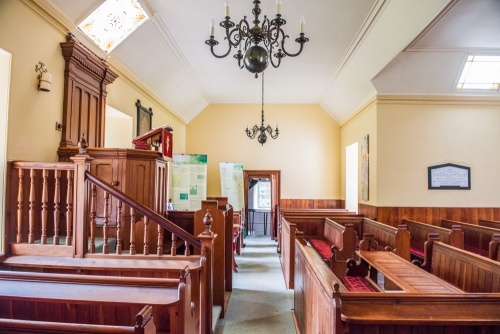 These meetings helped launch a religious revival in the Highlands. This revival had a social aspect that alarmed some of the local lairds, for revivalists opposed the rights of landowners to appoint ministers. Instead, they wanted congregations to be able to elect their own ministers.

When Rev Balfour died in 1759, the landowners appointed a Mr Grant to replace him. Grant, however, did not meet with the approval of the congregation. Only four people attended the induction ceremony for Mr Grant and two of these were other ministers opposed to his appointment.

During the sombre ceremony, a local man named McKeddie burst into the kirk and is said to have proclaimed 'The blood of the parish of Nigg will be required of you if you presume to settle a man to the walls of the kirk'.

Almost the entire congregation broke away from the kirk to form their own church at nearby Ankerville. Nigg was thus the first 'seceeding' congregation in the Highlands. The new church was erected with permission from the lair of Ankerville but unfortunately, no legal papers were signed, so 50 years later a new laird evicted them. The church was disassembled and the stones used to build New Shandwick House. Legend says that the locals cursed the stones. 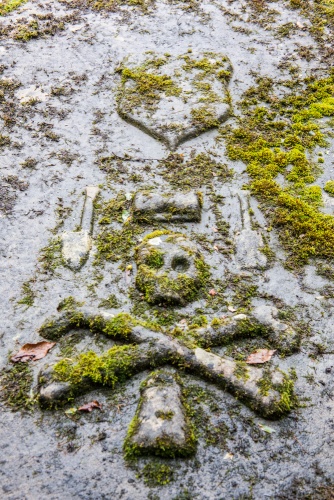 Symbols of mortality on a 17th-century tomb

Not every church official was committed to the spread of religion; according to a local tale a beadle (a church official) allowed an illicit still to be kept under the pulpit.

A steep stair from the chamber housing the Nigg Stone leads you to a long-forgotten 'poor loft'. The poor loft was closed off from the body of the church in 1853 and has been untouched by the hands of time since then. It is a time capsule of 18th-century architecture and style.

Poor lofts were not built to provide seating for the poor as their name might suggest. They were, in fact, a means of raising money for poor relief at a time when looking after the poor was a job given to each parish.

Common fund-raising techniques included church collections and fines for anti-social or immoral behaviour. Another way parishes raised money for the poor was through pew rents. Everyone who could afford it was charged a pew rent for their seat.

In 1729 the lairds of Cadboll and Invercassley built a loft over the north aisle, facing the pulpit, while the lairds of Kindeace and Pitcalnie built a loft over the east aisle. A third loft was erected over the west aisle by the Kirk Session (the minister and parish elders) with the intention of renting the seats to raise money for the poor - though they drew money from the poor fund to pay for the loft.

A split in the church in 1853 led to a smaller congregation so the north loft was removed completely and the east and west lofts were closed off the rest of the church. 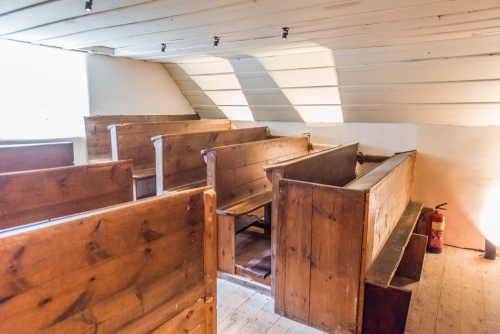 Inside a special exhibition in the old kirk at Nigg stands a superb Pictish cross-slab known as the Nigg Stone. This is among the finest works of Pictish art in Scotland and was carved around the end of the 8th century or perhaps even earlier.

For centuries the stone stood outside in the churchyard. Records show that in 1727 it was blown down in a storm. It was re-erected against the east gable to protect it from the wind. Sometime in the 16th century, the reverse face was damaged, perhaps by religious zealots.

It was later moved to allow access to a burial vault but was re-erected upside down. Eventually, it was moved inside the church to protect it from further damage and weathering. In 1998 a lost section of the stone was found in the burn that runs beside the churchyard and was reattached during restoration work in 2013. 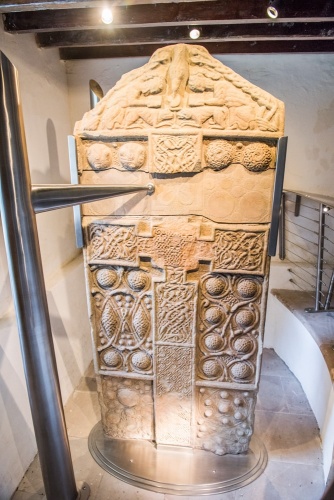 The cross-slab stands 2m high and 1m wide. It is made of local sandstone carved with astonishing detail, resembling the illustrated manuscripts of the period. The central panel shows David defending his flock of sheep from a lion while above and below this scene are Pictish nobles engaged in hunting. Look for David's harp, modelled after an 8th-century Pictish instrument.

Over the central panel are an eagle and a Pictish beast, two common artistic motifs of Pictish art.

At the top of the slab is the first known depiction of the Eucharist (the mass, or Lord's supper) in Britain. This shows a dove descending from on high bearing a wafer of consecrated bread (another interpretation of the scene suggests that the bird is a raven sent by God). Below the bird are a chalice of consecrated wine and the figures of St Antony and St Paul bowing over books, while lions crouch down in homage.

The cross arms have raised bosses surrounded by interlaced beasts and serpents, while elaborate spirals cover other panels. The result is a stunning example of Pictish art.

But who carved it? 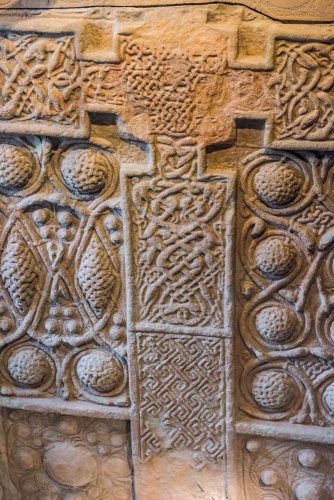 Detail of the cross carving

Christianity came to the eastern Highlands from Iona, perhaps as early as the time of St Columba in the late 6th century. We know that Columba journeyed up the Great Glen to visit Bridei, a Pictish king, but it seems that it was not for another two centuries that Christianity made real headway in the area and a monastery was built at Portmahomack on the northern tip of the Tarbat peninsula.

It seems possible that the cross-slab and others in the region could have been carved by the monks of Portmahomack. 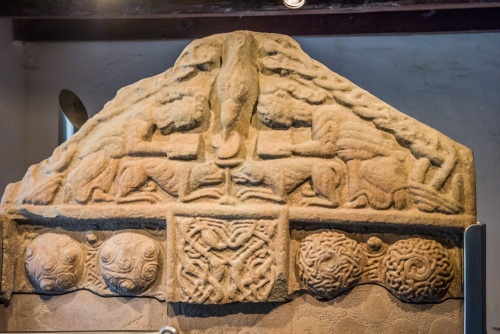 The earliest depiction of the eucharist in Britain

There are two 14th-century grave slabs in the churchyard as well as the Cholera Stone, erected in the 1830s in the belief it would help keep the village free of the disease. According to the tale, a church elder was coming out of the church when he saw a cloud of vapour, or miasma, lying low over the churchyard. He thought it was a mist of cholera, and quickly threw a blanket over it. He then placed a large stone on the blanket to stop the cholera cloud from escaping. You can still see the Cholera Stone in the churchyard (no longer covered by a blanket).

The Bishop of Ross received the revenues of Nigg Church and maintained a hunting ground nearby. He also owned a mansion, and orchard, fish ponds, and a garden as well as a moot hill for holding his courts.

Near the west end of the churchyard is a box tomb dating to 1679, carved with a spade and crossed sceptre - symbols of mortality. Other gravestones show a 'mort bell' or passing bell rung at funerals. The Nigg mort bell is now held at Tain Museum. There is also a table stone carved by Hugh Miller, the famous Cromarty geologist and mason. 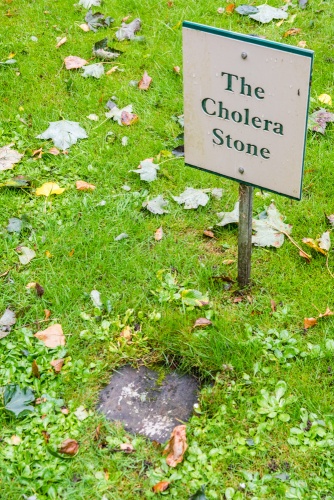 Nigg Old Church is open daily from spring through autumn. It is located on the minor road through Nigg village between Balnabruaich and Pitcalnie. There is a small parking area outside the churchyard.

The Nigg Stone is part of the Easter Ross Pictish Trail, linking Pictish sites in the region. Look for the Celtic symbol on brown tourist signs to direct you along the route. Just a few miles north-east is another Pictish cross slab at Shandwick.

Nearby accommodation is calculated 'as the crow flies' from Nigg Old Kirk & Pictish Stone. 'Nearest' may involve a long drive up and down glens or, if you are near the coast, may include a ferry ride! Please check the property map to make sure the location is right for you.