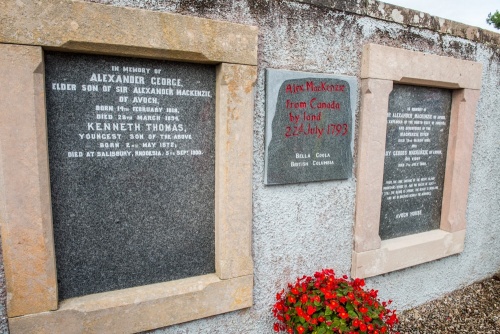 In a low stone-walled enclosure in the churchyard at Avoch stands a memorial to Sir Alexander Mackenzie, who explored the Canadian wilderness and was the first man to cross the North American continent from coast to coast. The memorial includes the graves of Sir Alexander, his wife Lady Geddes and their eldest son.

Alexander Mackenzie was born in Stornoway on the Isle of Lewis in 1764, the son of a tacksman, a sort of middle class between the large landowners and the poor subsistence farmers. In 1773 his father Kenneth sailed to North America and Alexander followed in 1774 and they settled in upper New York State.

Unfortunately for the Mackenzies, they arrived just as the American War of Independence broke out. Alexander was sent to Montreal in what was then Lower Canada, to finish his education and to stay safe from the conflict. After school, he joined the fur-trading business of Gregory, Macleod and Company. 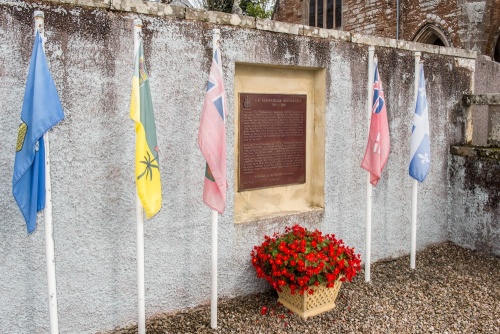 Government of the Northwest Territories plaque

He quickly gained a reputation for building friendly contacts with native fur-trappers and found fresh supplies of fur for his employers. Mackenzie was made a partner in the business on condition that he travel into the largely unknown Canadian north-west in search of new fur supplies.

Mackenzie became fascinated with the possibility of finding an overland route to the Pacific Ocean and in the process open up new markets for the fur trade. In 1789 he set off on his first expedition, following a river that flowed out of the west end of Great Slave Lake.

Unfortunately, the river eventually turned north and emptied into the Beaufort Sea. Mackenzie was so downcast that he named the river the River of Disappointment. We know it today as the Mackenzie River.

Mackenzie determined to make another attempt, but first he returned to Britain to study navigation and to buy scientific instruments to help him make accurate maps. In 1793 he made his second attempt to reach the Pacific, this time following the Peace River to the Parsnip River and eventually to the sea at Bella Coola, British Columbia.

On 22nd July 1793, Mackenzie stood at last on the shore of the Pacific Ocean, after a voyage of astonishing hardship and determination. There he painted an inscription on a large rock using a mixture of red pigment and bear grease. The inscription read 'Alexander Mackenzie, from Canada by land, 22nd July 1793' and though the carving is worn, it can still be seen today. 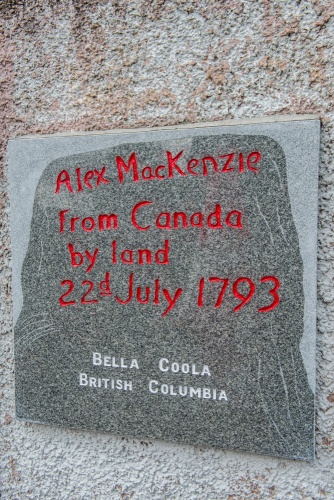 Mackenzie's account of his voyages made him an international celebrity and he was knighted by George III in 1802 in recognition of his explorations of the Canadian north. He returned to London in 1808. His memoirs were translated into Russian, German, and French and Napoleon is known to have read them.

Mackenzie's private life was tangled; he married a Native American woman but seems to have left her in 1794 after they had two children together. A son died in 1809 at Fort Vermilion but a daughter named Maria was sent to Sir Alexander's sister in Scotland to be brought up.

Sir Alexander then married Geddes Mackenzie of Avoch in 1812. He purchased the Avoch Estate at the considerable price of 20,o00 pounds. Though he spent half of his time in London, Mackenzie looked after his tenants. In 1815 he brought in engineer Thomas Telford to built Avoch's first harbour and he paid half the construction cost himself. He helped build the Congregational Church on Avoch High Street and laid down the oyster beds in Munlochy Bay. 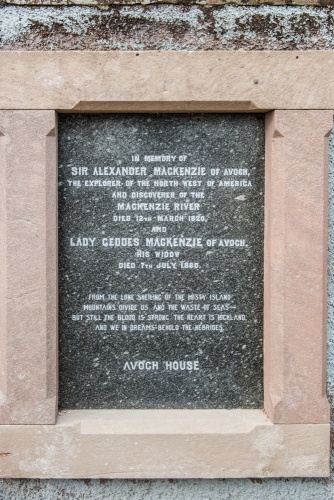 Mackenzie suffered from poor health, a fact that he blamed on the rigours of his Canadian expeditions. He travelled regularly to see his physician in Edinburgh. It was on returning to Avoch from one such trip that he fell fatally ill and died in 1820.

Lady Geddes lived on at Avoch House with two sons and a daughter. In 1832 a fire destroyed many of Sir Alexander's scientific instruments, maps and irreplaceable records of his explorations. Avoch House was finally pulled down in the 1960s leaving only the house frontage standing.

From the lone shieling of the misty island
mountains divide us and the waste of seas -
But still the blood is strong the heart is Highland,
and we in dreams behold the Hebrides. 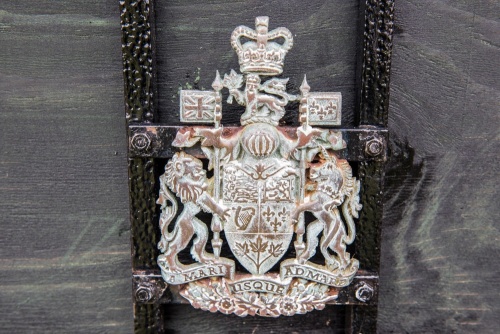 Canadian coat of arms on the memorial gates

Set into the wall of the memorial enclosure is a stone brought from Bella Coola and inscribed in red with the same words Mackenzie used to record his success,

Beside Sir Alexander and Lady Geddes' memorial is a memorial plaque to their eldest son Alexander George, who died in 1894 and his youngest son Kenneth who died in 1900. On the ground below the family memorials is a rock from Bella Coola, British Columbia, Canada, given by the Hon. John Fraser, Speaker of the Canadian House of Commons in 1993. A Canadian flag stands above the stone. 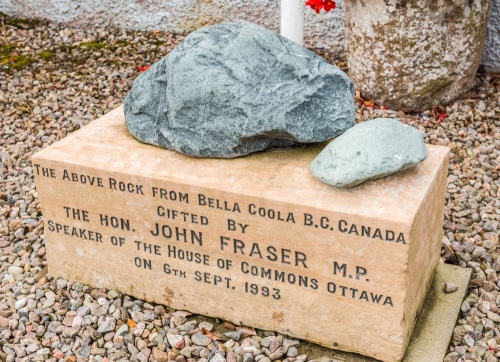 One side of the Mackenzie Memorial enclosure is centred on a plaque erected by the government of the Northwest Territories in 1989. Flanking the plaque are Canadian provincial flags.

The memorial is maintained by the Avoch Heritage Association who have erected a useful information panel to explain Mackenzie's accomplishments and tell his life story.

The Mackenzie Memorial stands in a low enclosure on the western side of the churchyard. It is quite obvious as you enter the churchyard gates opposite the west front of the church. The church is usually closed but you can access the memorial at any time. There is a small parking area just outside the churchyard on Braehead, reached via School Brae off the A823 in the village centre.

Nearby accommodation is calculated 'as the crow flies' from Sir Alexander Mackenzie Memorial. 'Nearest' may involve a long drive up and down glens or, if you are near the coast, may include a ferry ride! Please check the property map to make sure the location is right for you.