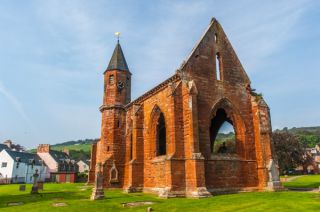 Fortrose Cathedral is a lovely red sandstone church built for the Bishops of Ross in the first half of the 13th century.  The founder was Bishop Robert, who moved the see from Rosemarkie to Fortrose from around 1236.
History
The diocese of Ross may date to the early 8th century, but the first written record of a bishop comes from 1130. In 1236 Pope Gregory IX granted Bishop Robert of Ross permission to enlarge the cathedral chapter. This papal charter prompted the bishop to move his see and start a new cathedral dedicated to St Peter and St Boniface.

The initial building was smaller in scale than most medieval cathedrals, as the see of Ross was not a wealthy one. The early building was extended in the 14th and 15th centuries to create the cathedral we see today, with a south aisle, tower, and chapel.

When the Reformation brought an end to Catholic influence, the cathedral fell into ruin, though it was for a time used as the parish church of Fortrose. In 1572 lead from the roof was sold to Lord Ruthven, which hastened the decay of the cathedral building. 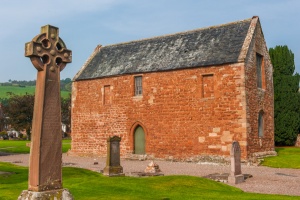 The 13th century chapter house and sacristy
In the 1650s Oliver Cromwell used stone from Fortrose to build a new fort at Inverness. Cromwell's men did such a thorough job of robbing the cathedral of material that not even the base of the cathedral pillars remain.

The site was used as a burial place for centuries, and the graveyard contains numerous examples of very finely crafted gravestones. The chapterhouse and sacristy were later used as a courthouse and as meeting chambers by the town council. The cathedral was restored in the late 19th century.

The best surviving parts of the medieval cathedral are the south aisle and late 14th century chapel, founded by Euphemia, Countess of Ross and wife of Alexander, the Wolf of Badenoch. Countess Euphemia's tomb stands under a canopy at the east end of the chapel, with a very worn effigy atop.

Two more tombs occupy arches within the aisles; they are similar in style to the Countess's tomb, though not quite as ornate, and commemorate Bishop Cairncross (d. 1545) and Bishop Fraser (d. 1507). What is really striking is the wonderful quality of the carving, even though the chapel has obviously suffered from the passage of time the architectural details that remain make it obvious just how impressive it must have looked when new.

Near the chapel stands the chapter house and sacristy. This is the oldest part of the site, dating to around 1300. It once formed part of the original north range. After the Reformation the building was refurbished as the tollbooth; a combination courthouse and gaol. The upper floor was used for council chambers, with prison cells built on the ground floor.

Throughout the grassed site you can see the outline of foundation walls showing the location of the original cathedral structure. 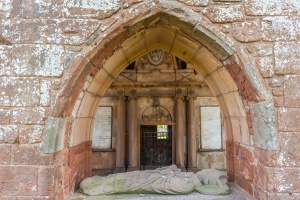 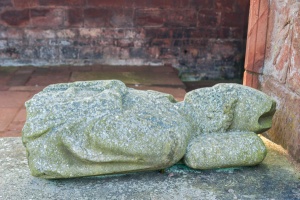 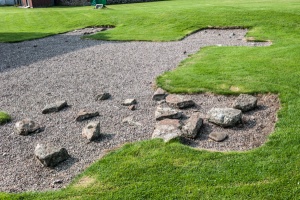 Foundations of the medieval cathedral 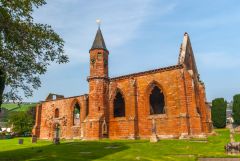 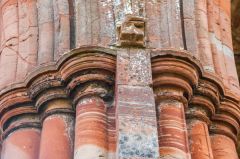 Nearby accommodation is calculated 'as the crow flies' from Fortrose Cathedral. 'Nearest' may involve a long drive up and down glens or, if you are near the coast, may include a ferry ride! Please check the property map to make sure the location is right for you.

More self catering near Fortrose Cathedral >>