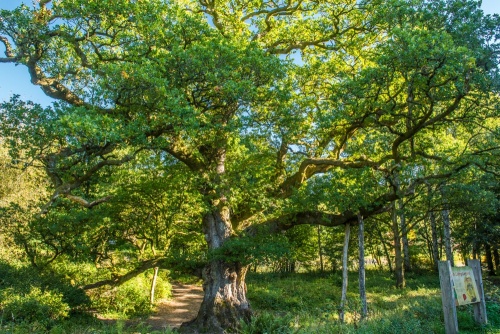 On the south bank of the River Tay, opposite the historic Perthshire town of Dunkeld, stand two trees that are all that remains of an ancient forest made famous by William Shakespeare.

In Act 4 Scene 1 of Shakespeare's play Macbeth, an apparition tells the would-be king that he shall never be vanquished 'until Great Birnam Wood to high Dunsinane Hill shall come against him'. Macbeth quite logically concludes that that will never happen, for as he says, 'Who can command the forest and make the trees pull their roots out of the earth?''.

Of course, Shakespeare has a plot twist in mind. The whole forest will not move, but MacBeth's enemies will carry branches from Birnam Wood to shield their movement from his soldiers' eyes, and thus catch Macbeth unaware and ultimately defeat him. 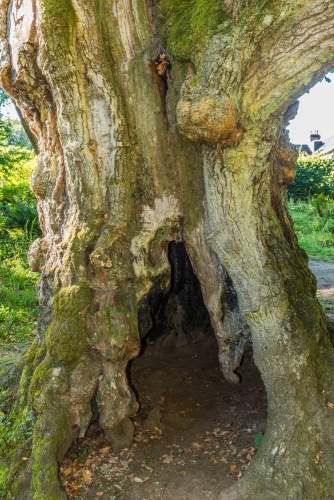 The hollow trunk of the Birnam Oak

Though Shakespeare shaped the story to his own dramatic ends, it is loosely based on real historical people and places.

Birnam Wood was very real, and once covered a large area on both banks of the River Tay and the surrounding hills. Over time the forest was harvested and gradually diminished in size. Now all that is left is a solitary oak tree, gnarled with age and held upright by timber props.

The tree almost certainly was not standing at the time the real Macbeth ruled in the 11th century. It might, however, have been standing in 1589 when it is believed Shakespeare was one of a troupe of English comic actors or 'strolling players' to visit Perth, Aberdeen, and Birnam at the invitation of James VI of Scotland.

James had written to Elizabeth I of England asking for entertainers, and though we do not know for certain that Shakespeare was one of the actors, it does seem quite plausible. If so, that would explain how Shakespeare got the idea for his play, perhaps listening to local tales and embellishing them in his own way. 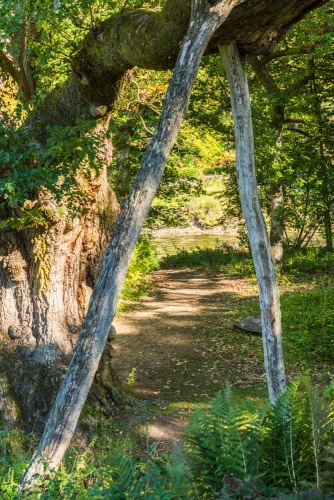 How old is the Birnam Oak?

We don't know for certain but the tree has a girth of over 7m (about 24 feet) which suggests an age of around 600 years old. That would mean it was already a mature tree at the time of Shakespeare's presumed visit to Perthshire in 1589.

The lower 3m (10 feet) of the trunk are hollow and it seems that there was a fire inside the hollow trunk at some point in the past, judging by the blackened interior. Despite the damage, the tree appears to be thriving.

The Oak suffered when Storm Desmond hit Perthshire in 2016, causing the river to flood and wash away soil from the tree's roots. That meant that the weight of its heavy branches put enormous pressure on the weakened tree trunk. Experts feared that the tree was in danger of splitting in half so heavy timber supports were put in place. 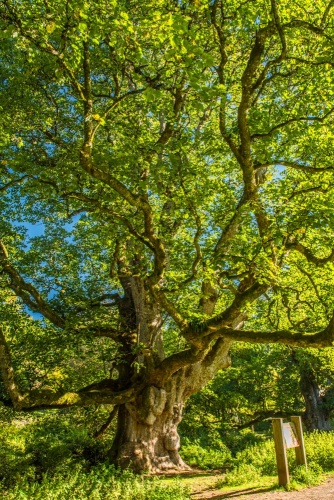 Immediately beside the Birnam Oak is a huge sycamore, known, not surprisingly as the Birnam Sycamore. Though larger than the oak at some 8m girth it is probably much younger. It is thought to be around 300 years old, making a comparative sapling beside its ancient oak neighbour.

It is interesting to note that though the sycamore is larger, it is home to far fewer insects. About 15 different species live in the sycamore, the oak supports over 300 insect species. The sycamore's nectar attracts large clouds of bumblebees in spring, giving it the local name of the 'Bumming Tree' after the bee's constant noise.

In 2016 an ultrasound scan revealed that the apparently healthy sycamore is hollow, with enough space inside for three adults to stand up comfortably.

The Birnam Oak can be reached on foot from the centre of Dunkeld across the river. From Dunkeld's market square take High Street east to Bridge Street, turn right and walk over the historic Dunkeld Bridge, erected by Thomas Telford. At the southern end of the bridge there is a signpost beside the old toll house on the eastern side of the road.

Steps beside the toll house lead down to the river bank. From there simply follow the riverside path eastward for about half a mile. You will cross a small footbridge over a stream and the Birnam Sycamore will come into view on your left, with the Birnam Oak just beyond it. Both trees are signposted with information panels and are impossible to miss.

Birnam is part of Perthshire's 'Big Tree Country', home to some of the oldest and largest trees in Britain.

About The Birnam Oak
Address: Dunkeld, Perthshire, Scotland, PH8 0BL
Attraction Type: Countryside - Tree
Location: On a riverside path on the south bank of the River Tay at Birnam, reached by a footpath from Dunkeld Bridge or off Oak Avenue in Birnam village.
Location map
OS: NO032421
Photo Credit: David Ross and Britain Express

Nearest Accommodation to The Birnam Oak:

More self catering near The Birnam Oak

More Hotels near The Birnam Oak

More bed and breakfasts near The Birnam Oak

Self Catering near Dunkeld