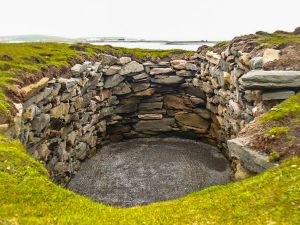 Ness Of Burgi Promontory Fort
In a stunning location on the edge of the sea, this stone blockhouse is probably of Iron Age date, though there similarities to the construction techniques used in later broch building. It was likely built for defensive purposes, though it would have taken a determined invader to attack the location! There are three cells surviving, and the site gives views across to the lighthouse on Sumburgh Head.

The Iron Age remains at Ness of Burgi are what is called a promontory fort; that is, one that uses a narrow neck of land with the sea and rocks providing defences on all but one side. On the landward side is a double ditch with a stone rampart between the ditches. The main structure is a blockhouse, linked to the defensive wall.

In the centre of the blockhouse is a low entry passage, similar to those often used for brochs. Anyone entering the blockhouse would have to stoop to access the interior of the fort.

This gatehouse area is defended only by ditches and may simply have been built for show. On either side of the passage are small cells with corbelled ceilings, one linked to the interior and the other to the entrance passage. There is a third mural cell, but this is now blocked. The gatehouse is 74 feet long though it may originally have been longer, and averages about 20 feet wide.

Like brochs, the entrance was defended with bar-holes and door-checks. It seems peculiar that there is no evidence of a wall from the gatehouse to the cliffs on the north of the promontory, otherwise an attacker could simply go around the gatehouse and bypass its defences.

The blockhouse style of structure seems to have been a local Shetland concept. There is a similar structure at Clickimin, where a blockhouse stands in front of a traditional broch tower.

An excavation in 1935 found several pieces of pottery, but another dig in 1983 found no artefacts. Records from 1882 suggest that a pair of carved discs were discovered on the site. If so, they are long lost.

As the saying goes, getting there is half the fun! In this case, it involves getting to the end of the Scatness road, then through a gate to follow a well-defined track beside a stone dyke. Follow the track to the end of the peninsula where the rock is crumbling away. A handrail provides a bit of safety to cross the narrow neck of land, and then the peninsula widens out towards the blockhouse at its very tip.

Ness of Burgi is an open-access site, in the care of Historic Scotland.

Nearby accommodation is calculated 'as the crow flies' from Ness Of Burgi Promontory Fort. 'Nearest' may involve a long drive up and down glens or, if you are near the coast, may include a ferry ride! Please check the property map to make sure the location is right for you.

More self catering near Ness Of Burgi Promontory Fort >>

More bed and breakfasts near Ness Of Burgi Promontory Fort >>