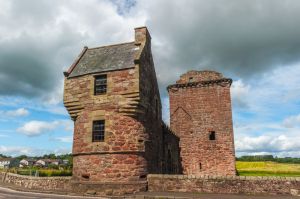 Burleigh Castle is a fortified tower house built around AD 1500. The house stands roofless but is otherwise remarkably complete and unaltered.
History
Around 1445 Sir John Balfour bought land here at Milnathort and built a timber manor house surrounded by a moat. Nothing remains of that first Burleigh Castle beyond traces of a ditch to the west of the present castle building. About 50 years later that early moated manor was replaced by an imposing stone tower house with a quadrangular courtyard.

All that remains of the courtyard buildings is the west range, linked to a beautifully preserved tower. The Balfours wanted their new house to be a statement of their wealth, and so created a long avenue of trees to mark the official approach to the castle from the west.

The 5th Lord Balfour of Burleigh had a turbulent life. He was accused of murdering a schoolmaster who had married his childhood sweetheart and was sentenced to death in 1707. He escaped from the Tolbooth in Edinburgh by trading clothes with his sister. He hid for a time in a tree near the castle until he escaped overseas to France. He returned in 1715 to fight for James Stuart in the First Jacobite Rising. When the Jacobite cause floundered, Balfour was forced to flee back to France, where he died. His estates were granted to the Irwin family, then in time to the Grahams of nearby Kinross. 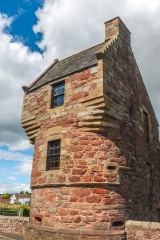 The south west tower
The most important building at Burleigh was the tower house, built in the north west corner of the courtyard. This was three storeys high, plus an attic, and was defended by a parapet with three angle turrets and a caphouse on the fourth side to house a spiral stair. The top floors are now roofless, though the vaulted cellar is still intact.

Linking the tower house to the south west tower is the west wall, pierced by the main entrance arch. The entrance was once defended by a two-storey gatehouse, but this is now gone.

Though the tower house was the main residence of the Balfour family, the most interesting building is the south west tower built by Sir James Balfour of Pittendreich and his wife, Margaret Balfour, of Burleigh.

This tower a fantasy construction, much like Claypotts Castle, with an upper rectangular storey corbelled out over the ground floor and decorative embellishments like skewputts (a carved stone projecting out from the bottom of the roof). The skewputts are carved with the date 1582. The tower retains its roof.

Both the tower and the tower house have gunports at the base and the tower caphouse has small pistol holes. It seems likely that these were provided for ornamental effect rather than any serious effort at defence. 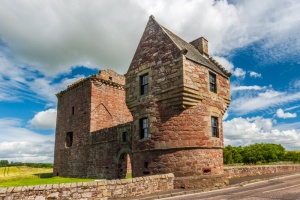 The castle from the south west

Burleigh Castle is an excellent example of Scottish baronial architecture, in a very good state of preservation. The castle is in the care of Historic Scotland and (in theory) keys for the tower can be obtained from one of the nearby houses in Burleigh Castle Steading at any reasonable time.

I say 'in theory' because on our last visit there was no answer at the cottage where the keyholders live. We talked to a neighbour who was very puzzled, saying that there is almost always someone home to give out the castle keys. Maybe we were just unlucky, but it seems like a better solution could be found so that visitors do not have to cross their fingers and hope that the keyholder will be home when they visit.

Having said that, the castle remains are extremely impressive. The south west tower is a beautiful example of a corbelled construction, and the rectangular top above the circular base is very eye-catching. You can easily examine the west wall and both towers, and see remains of the moat on one side of the site.

One other point to mention is that there did not appear to be any signpost to the castle off the A91 or B966 in Milnathort. Trust me, its there! Just take the A911 from the centre of Milnathort, towards Balgedie, and you will come to the castle directly beside the road just past the last few houses in Milnathort. 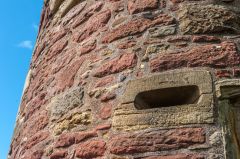 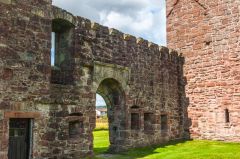 More self catering near Burleigh Castle >>