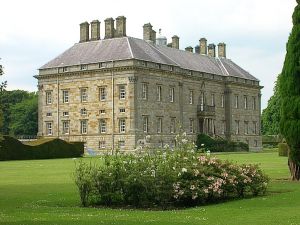 Kinross House
17th-century gardens surround the elegant country house of Kinross, overlooking Loch Leven. Both gardens and house were designed by Sir William Bruce in 1685. Bruce was a fascinating character; a courtier and statesman with a passion for architecture. He was the first true classical architect in Scotland and was variously compared by his contemporaries to Inigo Jones and Sir Christopher Wren.

His other major works beyond his own house at Kinross were the rebuilding of Holyrood House in Edinburgh, Hopetoun House, and Thirlstane Castle.

The house and gardens were restored starting in 1900. The house is now a private home but the gardens are regularly open to visitors from Spring through Summer. The gardens feature formal arrangements with yew hedges, herbaceous borders, and topiary. The gardens stretch to four acres and are bounded by carved walls.

Bruce laid out the gardens in a mix of very formal Dutch and French styles that were then popular. Bruce and his son John planted over 100,000 trees and built avenues of Scots pine, oak, ash, and elm. So much work was put into creating the gardens at Kinross that they became famous even before they were complete! Kinross House and its gardens were celebrated by Daniel Defoe in his 1772 classic 'A Journey through Britain'.

One feature of the gardens is the so-called Fish Gate, a stone and wrought iron gateway embellished with outstanding stone carving.

More self catering near Kinross House >>