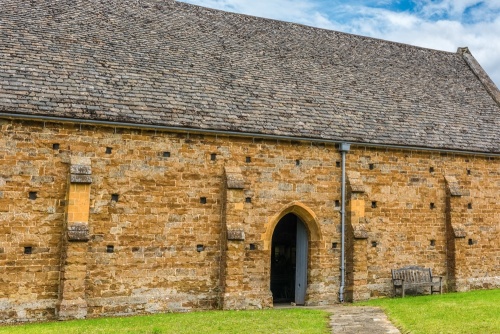 Constructed at the turn of the 15th century, Swalcliffe Barn is one of the finest tithe barns in England, with a superb timber-framed roof built in the half-cruck style. Original mason's marks can be seen on the stones inside the building.

The barn was begun in 1400 for New College, Oxford, and the college founder, Bishop William of Wykeham, gave the Swalcliffe estate and barn to his new foundation. Wykeham was one of the most powerful men in England.

Though he had no direct descendants, being a clergyman, his relatives and their descendants lived in Swalcliffe for centuries. You can see their memorials in the medieval parish church. 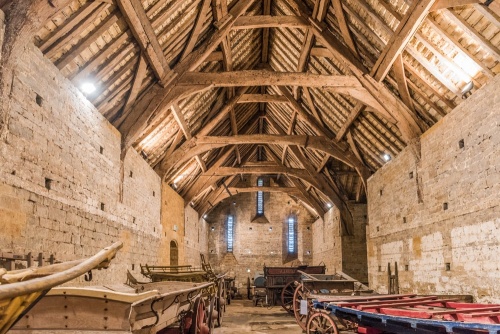 The barn is remarkably complete, with almost all of its original half-cruck roof still intact. For this reason, it is considered among the best medieval barns in the country. It stretches 128 feet internally by 22.75 feet wide. The interior is divided into 10 bays, defined on the barn exterior by large buttresses.

The walls are made of coursed ironstone rubble and are up to 3 feet thick. There are two entrance porches, both retaining their medieval stone gables and arched openings.

Within the barn is a local museum showcasing a collection of agricultural tools and vehicles, particularly Oxfordshire Waggons. Traditionally, Oxfordshire wagons were painted yellow and red.

One of the carts is a 1910 watercart made by Reeves at the Bratton Ironworks. It carries a cylindrical tank made of galvanised iron. The tank is divided internally by baffles to prevent the water sloshing about. The cart was used on the farm at Cherbury House in Cherbury Bassett. 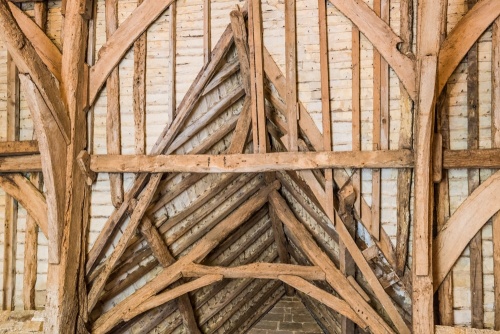 Then there is a Bent-side Rally Car made in 1895. It is not a rally car in the sense of a racing vehicle; it is a type of two-wheeled gig used for passenger transport, with a sliding seat and a backboard to protect the passengers.

Then there is a Bow Waggon dating to around 1885 and used on a farm at Churchill Heath. Then there is an Oxfordshire waggon made in 1889 by Mr Pullin of Charlton-in-Otmoor for Mr VW Tompkins of New Inn Farm in Stanton St John. These waggons were used for carrying heavy loads at harvest time. 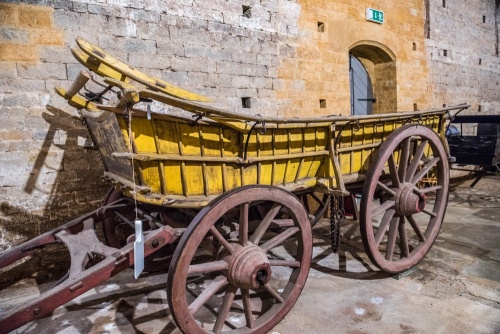 Another car that caught our eye was an early 20th-century Flat Trolley used by Thomas Stanford and Sons of Bicester to carry fruit, most notably blackberries. Thomas Stanford was known as 'The Blackberry King of Covent Garden'.

Residents in the Bicester area gathered blackberries and sold them to Stanford, who used this trolley to carry the fruit to the Bicester rail station and send it to Covent Garden fruit market in London for sale. Some berries were used by the Swan Company to make black ink, but most was sold to John Lyon to make jam. 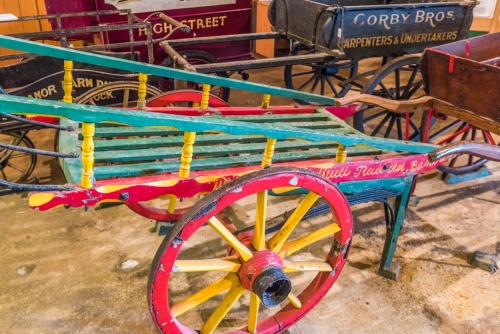 The Swalcliffe Society also maintains an exhibit on the local history of the area, including old photographs and fascinating social history, including the story of a cottage that stood directly in the line of a flooding water supply so to prevent damage the owners opened the front door and the back door and simply let the floodwaters flow through the cottage.

One of the most interesting local history exhibits is an 18th-century clock that once hung in the tower of the parish church of St Peter and St Paul. The clock mechanism was made by Thomas Reynolds of Oxford in 1755 and given to the church by William Wykeham. It was replaced in 1940.

This is a two-train turret clock driven by stone weights linked to hour and minute hands. It struck each hour on the tenor bell of Swalcliffe's six bells. Though the clock remained in service until 1940 the last written record of the chimes working was in 1814.

Excavations at Swalcliffe Lea from 2000-2003 revealed the remains of a Roman villa which may have formed part of a larger settlement. Inside the tithe barn is a reconstruction of the Roman mosaic found inside Room 9 at Swalcliffe Lea villa. 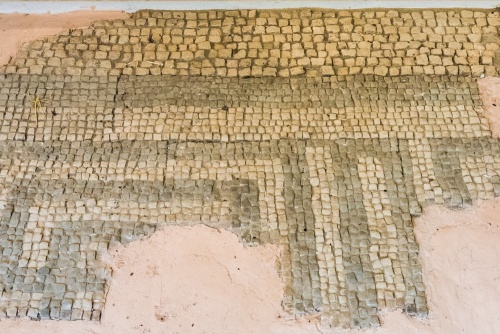 In a display case are a late medieval iron helmet and wooden bull heads decorated with chevrons. The helmet and bull heads are 'funerary achievements'; heraldic armour and symbols carried in a funeral procession and later displayed over the owner's tomb. The achievements were supposed to signify a life lived according to the code of chivalry.

The Swalcliffe helmet dates to the late 16th or early 17th century. It is purely ceremonial and was never intended to be worn in battle. The bull's head comes from the Wykeham family crest, which in heraldic terms is described as 'A bull's head erased sable, charged on the neck with two chevronels argent', which translates into common language as 'A black bull's head, torn from the body (with a ragged edge), with two silver chevrons on the neck'.

Both the head and the colours carried symbolic meanings; the bull's head meant bravery and generosity, the colour black meant constancy, and the colour silver stood for peace and sincerity.

The helmet was probably made for Humphrey Wykeham (d 1597) whose tomb is in the parish church. The helmet was displayed for some years on the window ledge next to the tomb.

There was originally a second helmet but that was stolen from the church in the 1960s and never recovered. 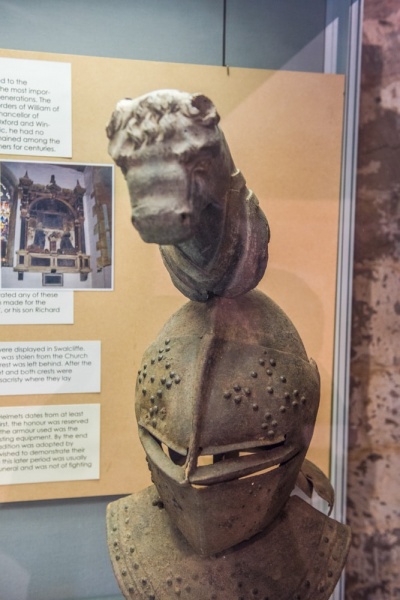 Near the barn entrance is an 18th-century fire pump made for New College, Oxford. It was given to the College in 1760 by William Wykeham of Swalcliffe and made in London by the Nutall company of Lambeth. The pump is a fascinating piece of 18th-century ingenuity; it was pulled by a horse but manoeuvred into position by manpower.

It took eight people working the double handles on each side of the machine to pump water from a leaded reservoir. It comes with leather hoses and brass fittings. 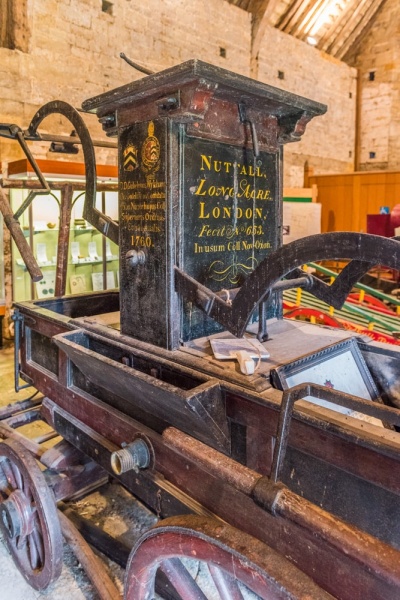 Swalcliffe Barn is on the B4035 just west of the parish church. There is a small parking area immediately west of the barn. The barn has limited opening hours as it is manned by local volunteers. Please check the official website for current hours.

We were very pleasantly surprised by Swalcliffe Barn. I was anticipating enjoying the timber-framed structure of the building but hadn't realised just how much local history material was on display not how many interesting old waggons. It will take at least 30 minutes to enjoy exploring the barn, the waggons, and the local history exhibits. 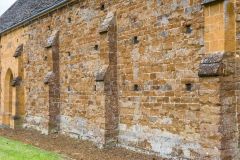 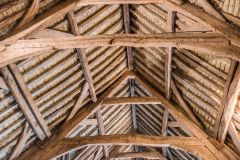 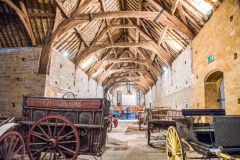 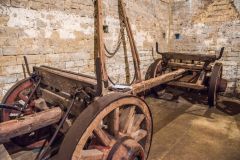 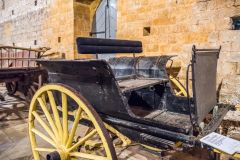 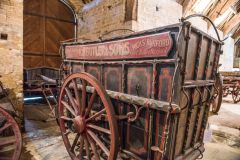 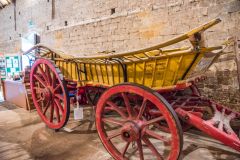 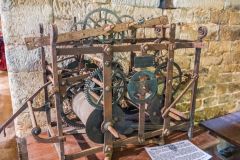 More self catering near Swalcliffe Barn >>