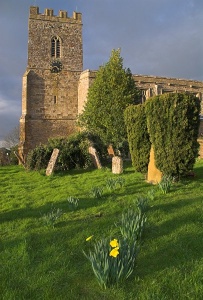 The small village of Whichford is located in the idyllic rolling hills of south Warwickshire. The village was mentioned in the Domesday Book as part of Northamptonshire, and it features several attractive older buildings around the very large green.

The original 12th-century church was quite a bit smaller than the building you see today; it filled only the space now occupied by the nave and part of the chancel. The only feature of this Norman building still surviving is the south door, which features a lovely carved tympanum. Around 1200 the west tower was begun and a north aisle added. This expansion of the church coincided with the building of a small castle only a quarter of a mile to the west by the de Mohuns. 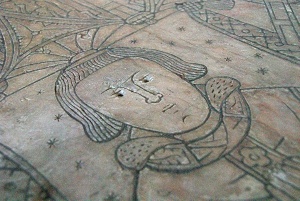 Carved alabaster tomb of
John Mertun (d. 1537) in the chancel

It seems likely that the building of the castle meant that a larger church was required to serve the de Mohun retainers and servants of the castle. Both castle and church continued to grow over the next century; the chancel was enlarged and the south porch constructed in the early 14th century. In the 15th century the roof of the nave was raised to allow space for an attractive clerestory.

The most interesting features of the church interior are to be found in the chancel. Against the north wall is the tomb of John Mertun, who was rector of St Michaels from 1507-1537. The tomb consists of a simple stone base carved with quatrefoils, with an alabaster slab on top. This is where things start to get interesting, for the slab is perhaps the finest example of an incised alabaster carving in Britain.

The carving represents Mertun in his ecclesiastical robes, standing between carved pillars. Around the outside of the table is a Latin inscription which translates as

'Here lies John Mertun sometime rector of this chuirch and former chaplain to Thomas Stanley, Earl of Derby who died ..."

The date of death is not filled in, so it seems clear that the tomb was prepared during Mertun's lifetime. There is one more interesting aspect to the Mertun tomb; the west end panel shows a carved book, and beneath the book, a pair of spectacles. This is one of the earliest known representations of spectacles in English art. 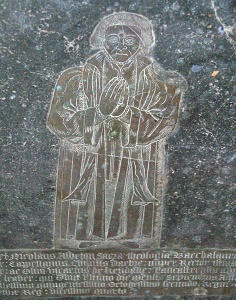 Funerary brass of
Nicholas Asheton
(d. 1587) in the sanctuary

Across the chancel, tucked inside the altar rail, is another quite lovely old tomb. This is the memorial to Nicholas Asheton (d. 1582). Asheton, like Mertun, was at one time chaplain to the Earl of Derby. It is possible that the slab topping Asherton's tomb was the original church altar slab.

It is carved with a likeness of Asheton in his robes of office, and inset with a number of Flemish brasses which date to the 15th century. It is likely that these brasses were stolen from the Low Countries during the religious conflicts of the 16th century.

The tomb base is extravagantly carved, and set beneath a wall plaque showing Asheton's coat of arms. The arms are surrounded by a Latin poem. According to the informative church history leaflet, this poem contains several amusing errors in the Latin text, suggesting that the scribe was illiterate, or at least, a poor copyist.

The south chapel was built by the de Mohuns as a family mortuary chapel. Much of the original architectural detail of the chapel is gone, but there remains a 14th-century tomb of John de Mohun set in an arched niche against the south wall. Above the tomb is a representation of the family coat of arms; a cross engrailed, with a mark of cadence, meant to distinguish an eldest son.

Here's a rough sketch showing the layout of St Michael's.

My acknowledgements to the excellent leaflet 'St Michael's Church, Whichford', by Eric Beresford, in the preparation of this article.

More self catering near Whichford

More bed and breakfasts near Whichford