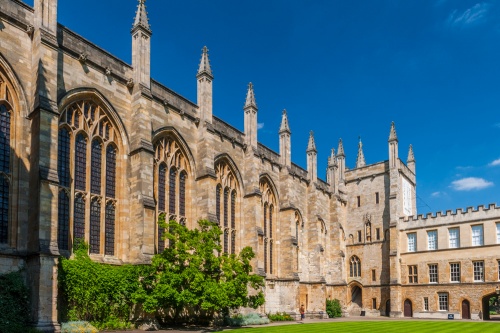 New College began life as St Mary's College, the brainchild of William Wykeham, influential Bishop of Winchester and Chancellor of England. The trouble was, there was already a college at Oxford named St. Mary's (now Oriel College), so Wykeham's foundation became the "new St. Mary's", and eventually simply "New College".

When New College was founded in 1379 it was the first college to be designed around the now obligatory quadrangle (although Merton's Mob Quad is older, it grew up organically, rather than by plan).

Bishop Wykeham intended New College to serve a dual purpose; supply clergy to replace those who had died in the Black Death and provide a chantry chapel whose priests would sing daily prayers for his soul. 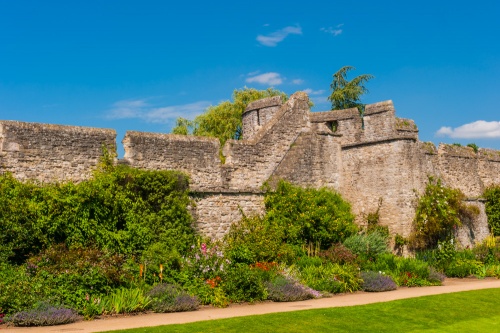 Wykeham made certain that there would be a steady supply of well-educated students for his new college by also founding a grammar school at Winchester (now Winchester College). At first, New College took all its students from Winchester, a practice which did not cease until 1854.

The charter to New College stipulated that the college was responsible for the upkeep of that section of the city wall which formed its boundary. The original medieval city wall still stands in the college garden - proof that the college upheld its bargain. Every three years the Mayor and Corporation of Oxford take a ceremonial walk along the wall to verify that the College is maintaining it.

William of Wykeham wanted religion and theology to be at the centre of college life, so he built a college chapel to inspire and awe. He gave money for a full-time choir to perform at daily masses and other services and created a superb example of 14th-century architecture. 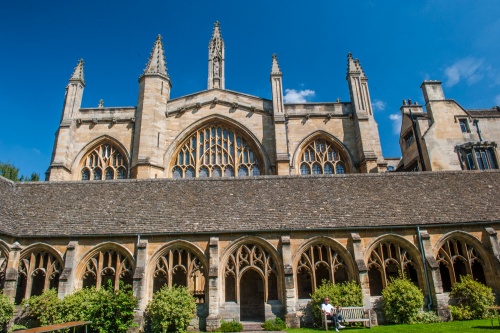 New College Chapel from the Cloisters

The medieval choristers had a busy life, for when they were not singing for chapel services they were required to serve as waiters in the hall, and keep the students supplied with beer. Today's choristers don't have to fetch beer and have established a reputation for performing Renaissance and Baroque music.

The chapel features 14th century stained glass and an outstanding collection of 14th-century misericords. There are 62 misericords, or 'mercy seats', several of which were copied in the 19th century to be used in Canterbury Cathedral.

Behind the altar is a stunning reredos, creating a wall of statue niches. The reredos was the work of Sir George Gilbert Scott. In addition to the medieval glass, there are stained glass windows designed by artist Sir Joshua Reynolds, including the large west window.

The chapel backs onto the hall, and next to that is the Muniment Tower, originally built to protect the college's valuables. The lower floor is now a museum showcasing the college's collection of gold and silver plate, as well as curiosities such as a pair of 'unicorn's horns' (actually narwhal tusks) and William Wykeham's bishops mitre.

Another notable aspect of New College is its garden, arguably the finest among Oxford colleges. Apart from the section of the medieval city wall (see above), the garden contains an authentic Elizabethan viewing mound, a common decorative feature of Tudor gardens. The mound was built on a burial ground used for interring victims of the Black Death in 1348.

Some famous students of New College include:

The college is open most days, from the entrance on New College Lane. Shorter hours in winter (access via the main entrance on Holywell Street). Fee charged. Entry includes visitor map and guide and allows access to the Cloisters, Chapel, Hall, Gardens and City Wall. New College is one of the most visited colleges in Oxford and has one of the largest grounds. 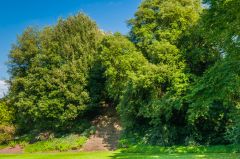 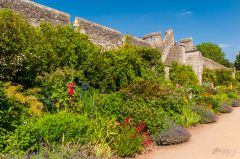 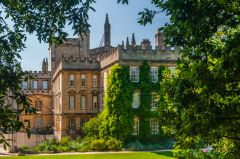 More self catering near New College