HERITAGE HIGHLIGHTS:   Magnificent medieval wall paintings are among the finest in England 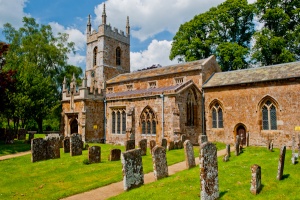 The medieval church of St Peter ad Vincula stands in a delightful village setting, surrounded by rusty brown cottages of ironstone, and leafy green trees. The village has its roots in the Saxon period when it was recorded as 'Nivantun', meaning 'new settlement', a settlement that grew up around a convenient crossing of the River Swere.

The first record of a church dates from 1170. Remains from that Norman building include a pair of rounded arches in the south arcade, and the simple tub font, decorated with a zigzag pattern near the rim. The Norman church was completely rebuilt around 1290, when the tower was added, with a south aisle, and part of a north aisle.

The nave was extended by one bay, and the chancel added to its eastern end. Then in the 15th century the nave roof was raised, a clerestory inserted, and a porch built onto the south aisle. The porch is architecturally marvellous, with gargoyles decoarating the exterior, and a niche above the entrance which once held a statue of St Peter.

Facing you as you enter the church, decorating the north nave arcade, is a series of vivid paintings depicting the Passion. This series dates to the 15th century, and while some areas are well preserved, others are quite worn.

From the left (west) you see the Entry into Jerusalem, the Garden of Gethsemane, the Flagellation, Carrying the Cross, the Crucifixion, amd the Resurrection. The final looks for all the world like Christ getting out of a bath! The spandrels show Trinity Trees and the Instruments of the Passion. 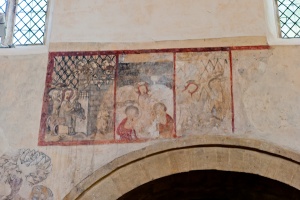 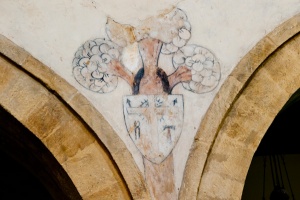 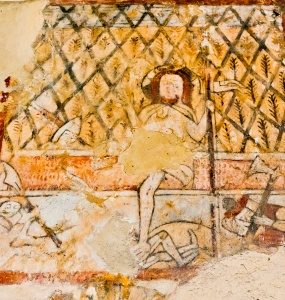 If this cycle was all that South Newington held it would be worth a visit, but what awaits in the north aisle makes St Peter's a must-see.

This was almost certainly a private chapel for the Giffard family, and it is to them we owe the astonishing wall paintings that decorate the north wall. The paintings in the aisle date from about 1330 and are at the same time a devotional expression and a statement of political affiliation and family status.

They are created with oil on plaster, a very unusual and expensive way to produce paintings at that time. The paintings were covered with limewash at the Reformation, and this has acted to preserve the art in an amazingly good condition.

The murder of Becket was a popular subject in medieval church art, but only 15 or so wall paintings survive, and this is undoubtedly one of the finest. Why did so few survive? Henry VIII ordered the 'idolatrous' paintings destroyed, but this one was spared because it was covered by a painting of St George and the Dragon.

Becket is shown kneeling by an altar, confronted by the four knights. He is in an attitude of prayer, defended by a priest, who has blocked the first sword blow. A second knight strikes a fatal blow, while a third has his sword ready and the fourth begins to draw his weapon.

Becket's head is perfectly preserved, but only the head of the fourth knight, Richard le Bret, has survived relatively intact. 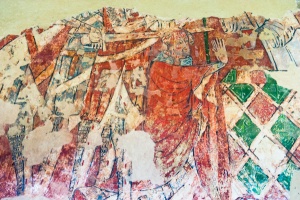 The Martyrdom of Becket 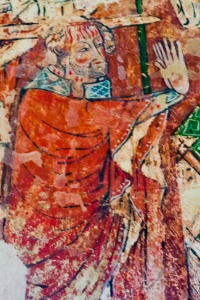 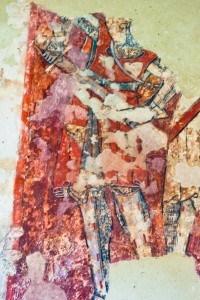 To me, this is the most interesting of the wall paintings, though not the most artistic or best preserved. This painting is immediately to the right (east) of the Becket martyrdom. It shows the execution of Thomas Plantagenet, the 2nd Earl of Lancaster, who was put to death on 22 March 1322 for his role in murdering Edward II's favourite, Piers Gaveston.

This bloody scene is like a moment frozen in time, with Lancaster kneeling the executioner poised for another blow, and blood spouting from wounds on his neck. This vividly portrays accounts of the execution, which tell that several blows were necessary to sever Lancaster's head from his body. 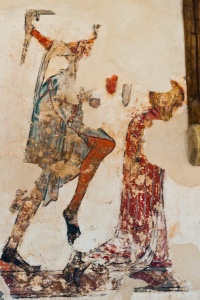 Why is Lancaster's death depicted here, at South Newington? It seems that John Giffard, Baron of Brimpsfield, was a follower of Lancaster. Giffard was executed along with Lancaster for aiding his rebellion against Edward II.

Baron Brimpsfield was a cousin of the Giffard family who held the manor at South Newington, so placing the execution of Lancaster immediately beside a depiction of Thomas Becket's murder was no accident; it seems likely that the painting was part of the campaign to have Lancaster canonised and to associate the Giffard family with the cause.

The Annunciation and St James

In a window splay in the north aisle wall is a 14th-century scene in two parts. On the top is the Annunciation, and though the figure of the Virgin is very worn, you can see a lily in a vase standing atop a heraldic shield with the Morteyn coat of arms. Another Morteyn coat of arms is visible in the depiction of St James in the bottom half of the scene. 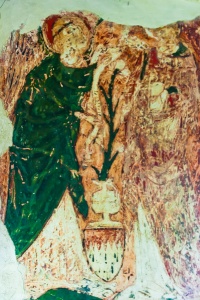 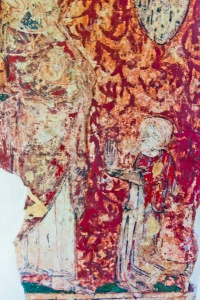 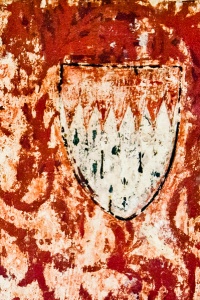 The Virgin and Child

Set in the east corner of the north aisle wall is the finest and most historically important painting at South Newington. This scene is wonderfully preserved and shows the Virgin within a Gothic arch decorated with three leopards, representing the Giffard coat of arms. She holds the Christ child in one hand and a fleur-de-lys in the other.

At the base is a geometric tile pattern and two figures of donors, probably John and Lucy Giffard. The figures of the donors incorporated into the painting is very rare, as is the rich, three dimensional quality of the painting.

This effect was achieved by using linseed oil as a paint base. This slowed the drying process and made it very expensive. The other known use of this technique from the mid 14th century is at Westminster Abbey, which again emphasises just how remarkable - and how well-funded - the paintings at South Newington are! 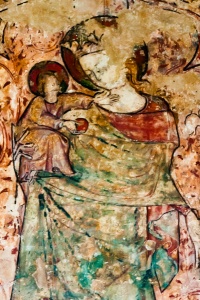 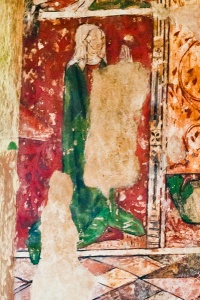 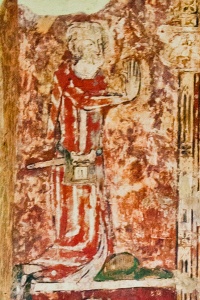 On the south splay of the east aisle window, this scene shows St Margaret slaying a dragon with a long spear. St Margaret wears a long green robe trimmed with vermillion and carries a book in one hand. She stands on a painted corbel carrying the Giffard arms. The opposite splay is empty now, but may originally have held a companion painting of St Catherine. There was probably a Lady Altar below the window. 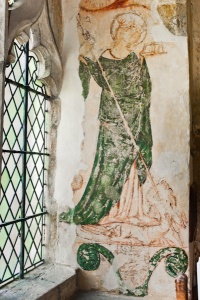 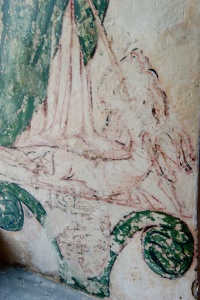 The dragon being slain

By contrast to the superb nor aisle paintings, the nave scenes ae rustic, almost primitive.

Located in its customary place over the chancel arch, this painting only came to light in 1920. It is much wor and parts of the scene are hard to make out, but you can just make out faces of the saved on the left of the scene. St Michael is shown with his scales, weighing up souls to see if they will go to Heaven or to Hell. 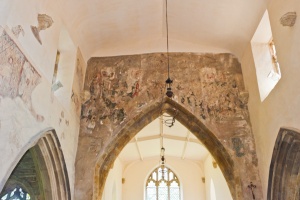 A lot of scholarly research has gone into answering this question. One theory points a finger at a man known simply as 'The De Bois Master', the same artist responsible for the De Bois Book of Hours, an illuminated manuscript produced around 1325, or by artists from Oxford familiar with his work.

This theory sounds even more plausible when we learn that the Book of Hours came into the possession of the Giffard family. The patrons responsible for hiring the artists were probably the Giffard family, and the donor of the Virgin and Annunciation painting may be John Giffard (d. 1369) and his wife Lucy. John's father, also named John, probably gave the St Margaret figure.

The chancel is in Early Decorated style, built around 1300. Beside the altar is a small piscina with an ogee canopy. If you look carefully at the glass in the nearby window you can see that glaziers who worked on the church have scratched their signatures into the glass.

On the wall is a memorial to John Lane. Curiously, Lane was married in December 1671, died in 1672, and his wife died just a month later. Another monument is a plaque to Samuel Hall (d. 1639).

The east window has fragments of very early medieval glass. In the left (north) trefoil is a symbol of a lion, used by William le Scissor, royal tailor to Henry III. Scissor owned an estate here in South Newington, but later granted it to the Hospital of St John in Oxford (later to become Magdalen College).

In the right (south) trefoil is an eagle, representing the Buckland family, recalling Isabel Buckland, who married into the local Giffard family. In the south window is 17th-century heraldic glass to the Hall family. 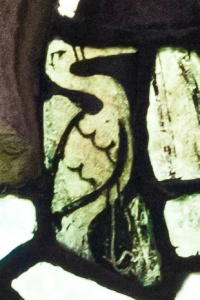 Heraldic crane of
the Cranford family 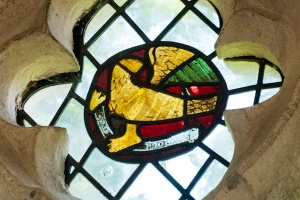 On the north aisle wall are several 17th and 18th-century certificates of burial, made of wool. These rather macabre documents recall a period when it was a legal requirement to bury the dead in woollen shrouds. The certificates are decorated with symbols of death and mortality, including hourglasses, skeletons, coffins, a scythe, arrow, and bodies wrapped in shrouds. 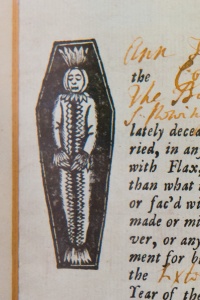 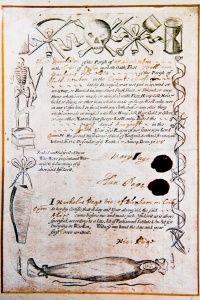 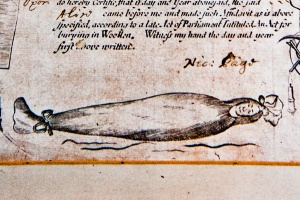 There are very interesting pieces of medieval glass n the north aisle windows, including a crane, the symbol of the Cranford family, who held the manor in the 13th century. In the window beside the painting of Lancaster's death is a double cross, the symbol of the Hospital of St John in Oxford.

Just outside the south porch is the stump of a medieval cross, perhaps all that remains of a preaching cross used before the church was built. Near the cross are two table tombs to the Hall family. Between them is a slab which covers the entrance the underground vault where generations of the Halls are buried. Outside the south aisle are a pair of late 17th century headstones now sadly too worn to decipher.

One of the delights of visiting country churches is that you never quite know what you will find when you push an ancient oak door open and peer into the interior for the first time.

I had heard vaguely that St Peter ad Vincula had wall paintings, but I was completely unprepared for my first view of the church interior. And the more I looked the more awed I became. The wall paintings at South Newington are among the finest in England, an absolute treasure of medieval art.

Yet unlike many more celebrated historic buildings, I doubt if many people have heard of South Newington. I can't emphasise enough just what a delight this wonderful church is to visit. I must have spent an hour photographing the wall paintings from every angle, trying to capture the delightful art and symbolism. 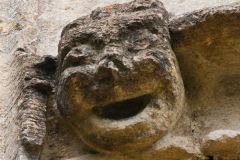 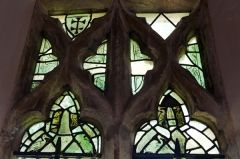 More self catering near South Newington