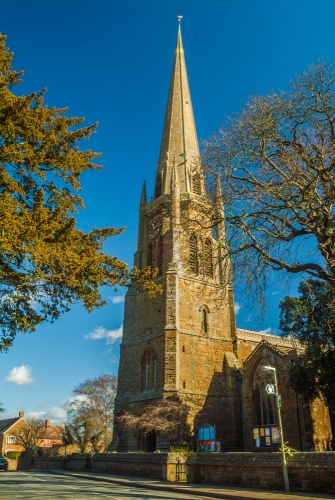 Our Lady of Bloxham Church

Any list of the finest medieval churches of Oxfordshire must give serious consideration to Our Lady of Bloxham parish church. The highlight of St Mary's is the superb spire, which is an excellent example of Decorated Gothic style. Similarities between Bloxham and its near neighbour of Adderbury suggest that the same group of medieval masons worked on both churches.

Parts of St Mary's date back to the 12th century, but most of the current building dates to the 14th and 15th centuries. Over the west door of the tower is a carving of the Last Judgment. The doorway itself is heavily carved, with depictions of animals, foliage, birds, beakheads, and traditional ballflower ornamentation. The hoodmould is carved with the 12 Apostles on thrones, with Christ with angels presiding over the whole scene.

One of the best features of the interior is a series of carved capitals in the north transept. There is a 12th-century doorway, reset in the north wall of the chancel. Above the doorway is a Norman tympanum with lovely carved details. There is 14th-century tracery throughout, carefully preserved in a sensitive Victorian restoration by the ubiquitous 19th-century church architect GE Street. 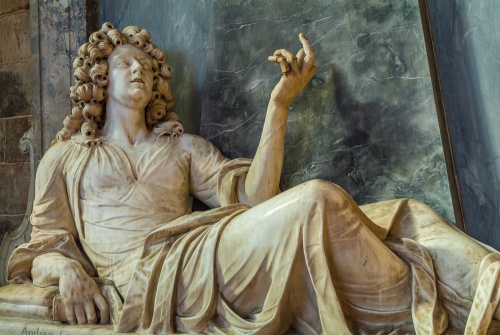 The south (Milcombe) Chapel dates to the 15th century and is a beautiful example of Perpendicular style with marvellous medieval stained glass. Much more modern, but equally impressive, is a neo-classical memorial to Sir John Thornycroft (d. 1725), carved by Andrew Carpenter and showing Thornycroft reclining like a Roman emperor.

There is an octagonal 15th-century tub font, topped by a wooden 17th-century cover. There is a colourful 15th-century rood screen, 5 bays wide, painted with traceried heads. The lower panels of the screen have original paintings of the Evangelists and Doctors of the Church, while the upper panels have been repainted. 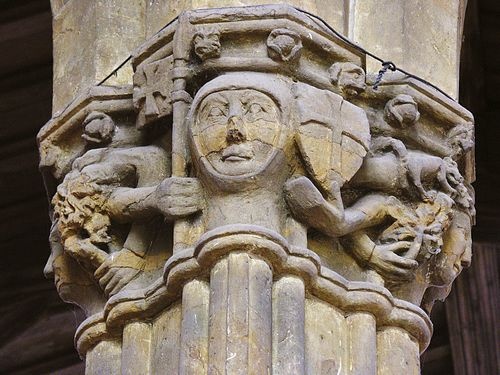 Over the chancel arch you can still make out parts of a 15th century Doom painting, while an imperious St Christopher stands over the door in the north aisle. A further wall painting, probably a 16th-century likeness of a martyr, is in the Milcombe Chapel.

One of the real gems among Oxfordshire churches, St Mary's Bloxham makes an immediate impression with its lovely tower and spire dominating the main road through the village from Chipping Norton to Banbury. The origins of the church lie in the 13th century, but most of what remains is 14th and 15th century. The Milcombe Chapel features some excellent memorials and a very fine 16th-century wall painting.

Adderbury for length
Bloxham for strength
Kings Sutton for beauty

I think Bloxham gets a bit of 'bad press' in this rhyme; it is every bit as beautiful as Kings Sutton (in my view it outshines Kings Sutton and matches Adderbury in the wealth of detailed carved figures adorning both the interior and exterior of the church). The rood screen is richly decorated and the wall paintings well worth a look.

More self catering near Bloxham

More bed and breakfasts near Bloxham