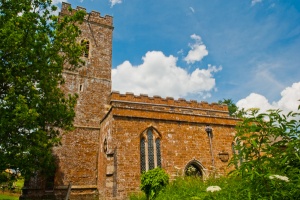 Wigginton is a small village in northeastern Oxfordshire, in quiet countryside between Chipping Norton and Banbury. The church of St Giles stands on the east side of the main road. The oldest parts of the current building are the nave and chancel, both 13th century, while the west tower and porch were added in the 15th century.

Excavations in the Victorian period revealed a Roman villa a short distance from the church. It seems entirely plausible that St Giles stands on the site of a Roman temple associated with the villa.

Red bricks which may be Roman can be seen high in the 15th-century tower. Did the medieval masons building the tower reuse Roman material found on the site?

The earliest record of a church comes from 1210, but we do know that in 1130 Robert d'Oilly granted tithe income to the canons of St George, Oxford Castle, so it is certainly possible that a church existed by that time.

Tithe income went to Oseney Abbey in 1149, but curiously the tithes were changed to a fixed annual fee of 5s prior to 1270. We know this because the monks of Oseney were forced to sue for non-payment on two occasions.

The advowson (the right to present the vicar) was passed through various lords of the manor until the Reformation. In 1555 Sir Thomas Pope was given a license to grant the living to Trinity College, Oxford, but the grant was never carried out. In 1686 the advowson was granted to Jesus College, Oxford, and the Colege has retained it since. 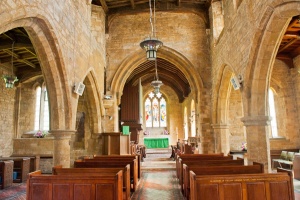 The nave and 13th-century arcades

The most obvious feature of St Giles has little to do with architecture, but with building materials, for the bulk of the church is made of local red ironstone, which practically glows in the sunlight, giving the church an almost surreal look. The oldest feature is a Romanesque capital, reused as a corbel in the south aisle.

In the chancel is a low stone seat beneath an ogee-arched canopy, decorated with ball-flower carvings. This canopy may have originally been situated over the sedilia on the south wall of the sanctuary, which shows obvious signs of damage.

On one side of the arch is a lovely, though worn, carving of a swan, while a dolphin appears on the other side. There are also small fragments of medieval glass gathered in the chancel windows. The sedilia is oddly set into the east wall of the chancel arch. 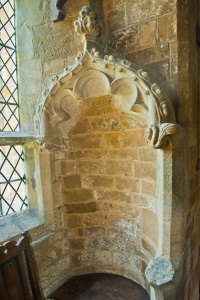 Canopied niche
in the chancel

While most of the interior fittings are Victorian, two medieval features make St Giles a worthwhile place to visit. The chancel has two monuments set in recesses, but neither is in its original place. In the south recess is a recumbent effigy of a man, with two small female figures, one on either side. These effigies stood upright, outside the south aisle wall in the 18th century before they were brought inside the church.

The man may be a member of the Fitzwyth family, who held the lordship of the manor at one time. The figure wears a sword, but is clad in civilian clothes, a surcoat and cape, with a purse and belt at his waist.

The small female figures are usually taken to represent the unknown man's wives. It seems very odd that these figures were found standing upright outside, which suggests that they were perhaps not meant as a funeral monument at all.

In the north tomb recess is a worn effigy of a knight, which was once on the south side. It is impossible to tell who the figure represents, but it seems certain to be of 14th-century date. He is certainly a knight, unlike the other effigy, and has his legs crossed in typical knightly posture. He bears a shield in his left hand and a short sword in his right.

In the south aisle is a grave slab to John Blunt, lord of the manor in 1700. The church guide rather unkindly says of the font that it is 'remarkable only for its ugliness'. It was erected in 1811 at a cost of £2 9s to replace the original medieval font. In the north aisle is a wooden parish chest, probably 16th century.

One curious feature is a very early clock in the tower. No one seems to know how old the clock is; eve the official church guide seems unclear, but it must date to at least the early 17th century, for the church records mention a payment for its repair in 1717.

More self catering near Wigginton

More bed and breakfasts near Wigginton