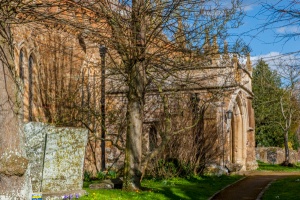 St George's church in Lower Brailes is known as the Cathedral of the Feldon, a testament to the impressive size of this lovely old building. Set in a pretty village in south Warwickshire, and looking out across farm fields, the church dates to the 12th century, but the earliest surviving features are late 13th century.

Most of the large building we see today is 14th century, with a very tall (120 feet) west tower added in the 15th century. The church was extensively rebuilt in 1649, which suggests that it suffered damage in the civil War. Royalist soldiers were quartered in Brailes from 1643, so it seems reasonable to assume that the church suffered damage during that period.

In the chancel is a 14th-century piscina with small carved heads on either side, and beside it, a triple-seat sedilia, decorated with trefoiled ogee heads. 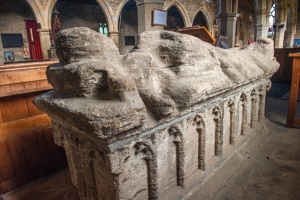 Just inside the south doorway are a very worn table tomb and effigy. This was originally outside in the churchyard but was brought inside the church in 1933 to save it from further deterioration from weathering. The effigy is thought to be that of Robert Bandy, vicar at Lower Brailes from 1433-1455.

A local tradition, however, suggests that it represents a crusader, and is several centuries older. In truth, it is hard to tell much about the effigy itself, which is extremely worn, but the tomb chest itself is in quite reasonable condition, with very nicely carved blank arcading around the base.

On the wall near the tomb chest is a benefaction board to William Willington, who, on his death in 1533, left enough money to give 40 shillings to the poor of the parish 'Yearly, for Ever'.

Immediately beside the tomb chest is a very odd whicker wheelchair, with iron wheels and a tiller steering column. In the south-west corner is a black marble tomb chest with an incomplete inscription on the top, and above it is a wall monument to Richard Davies (d. 1639).

Even without the inscription we can deduce that Davies was a scholar, for the top of the memorial does not bear a heraldic coat of arms, but a carving of a pile of books. The inscription tells us that Davies was a Master of Arts at Exeter College, Oxford, 'a joy to his parents, a Comforter of the Poor, the Counsellor of the Rich'. 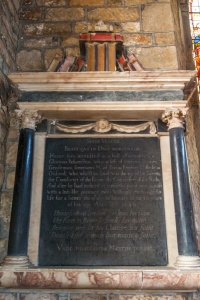 The nearby stained glass window has a very moving memorial to 37 children of the parish who died during an outbreak of diphtheria in 1867. A few steps from this window is the font, with a 14th-century bowl, atop a modern plinth. The octagonal bowl is beautifully carved with three-light tracery designs decorated with ballflowers.

In the north aisle is a richly carved 15th century parish chest with fanciful carvings depicting a dragon and eagle. Near this chest is another, much plainer one, certainly 16th or early 17th century, but bearing a later date of 1758 carved into it.

If you stand in the centre of the nave and look up towards the north wall, you can see an amusing set of mid-14th century stone corbels supporting the roof timbers. Each corbe is unique; some depicting animals, others mythical figures. One later addition of around 1655 shows a bewigged vicar, presumably the incumbent, Rev William Richardson.

One final feature worth noting are three stained glass panels,, set into the south aisle lancets. The surrounding glass is Victorian, but the smaller panels are of 16th and 17th century date and depict Biblical tales. 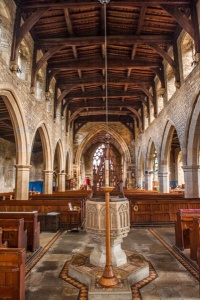 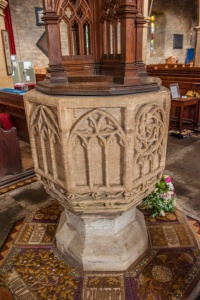 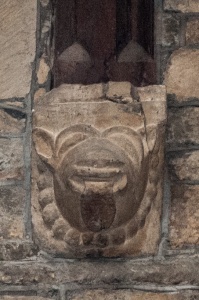 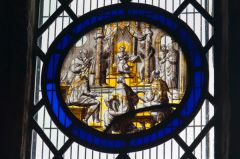 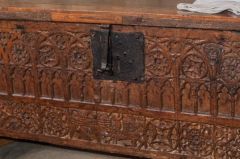 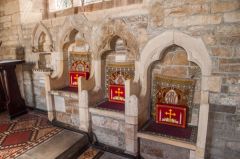 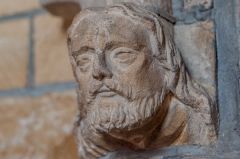 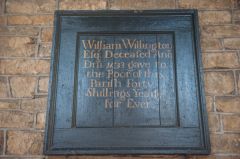 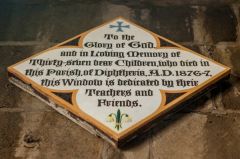 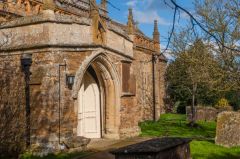 More self catering near Lower Brailes