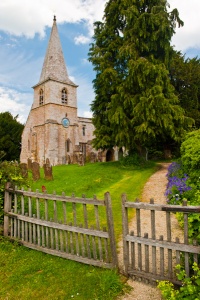 Though the church of St Mary dates to the 13th century, its origins go back to the 12th century, and therein lies a story. In the tumultuous period of the Civil War between Stephen and Maud that raged between 1135 and 1153, this area of north Oxfordshire was held by the d'Oily family.

Like many land owners, the D'Oily's were afraid of the lawlessness of the Civil War period, and they took steps to protect their estate by building a simple motte and bailey castle here.

The castle was illegal, but such niceties of law did not hold sway during 'The Anarchy' period, when many such castles were thrown up by nobles to protect their holdings. When Henry II came to the throne in 1154 he ordered such castles destroyed, but by that time a community had grown up around the D'Oily castle mound, a community that would become known as Swerford.

The earthen mound can still be seen behind the church, but there is no trace of any structure of buildings on the mound. 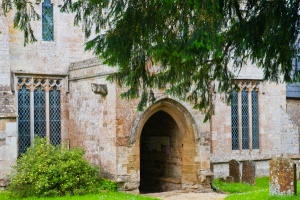 The D'Oily's had granted the income of their estate here to Osney Abbey in Oxford, and the monks of Osney decided to build a parish church to serve the growing population. It is this church we see today, though it was subsequently rebuilt n the 15th century and, like many parish churches, restored in the Victorian period.

The oldest part of St Mary's is the tower, which dates to the 13th century. You enter by way of a 14th-century porch, guarded by a pair of gargoyles. On the left jamb of the porch doorway are two scratch dials. These simple circular dials would have had a gnomon (a stick) in the centre to cast a shadow that would let bell-ringers know when to sound the bells for church services.

Inside the church, you find an octagonal 14th-century font near the door. The church guide suggests that this font was carved by the same mason who made the gargoyles by the porch. To the left of the south door is a list of rectors dating to 1221. 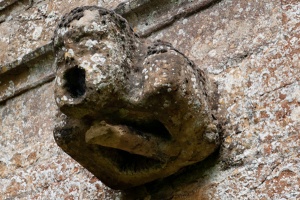 The most famous of these rectors was likely Alexander of Swerford, who served from 1228. Alexander was a Treasurer at St Paul's Cathedral in London and also a clerk in the household of King John.

According to his epitaph, 'he had no equal in handsomeness of body, beauty of face, or learning in many fields'. Certaibly he must have been handsome, for despite the fact that he was a clerk and thus sworn to celibacy, he is known to have fathered at least one child, a daughter named Agatha.

To the right of the south door is a painted board in the style of a medieval hatchment. It is in fact, not medieval at all, but 19th century, and commemorates Sir Robert Bolton, owner of Swerford Park, who died in 1836 after a long military career. Nearby is a plaque to the memory of Swerford native John King (1787-1854), who was a member of the first English missionary team to the Maoris of New Zealand. 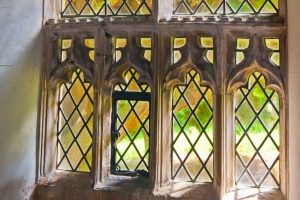 There are a few fragments of medieval glass in the south nave and chancel windows, though the large east window is a Victorian replacement. The most intriguing historical feature of the church is a small, hinged 'leper window' set into the larger south-east chancel window.

The current window pane is Victorian but it replaces a medieval pane. The window section is hinged to allow it to open, so that lepers outside the church could view the altar more easily.

There is some doubt over the use of these small windows within a larger window, but in the case of Swerford we may actually be on firm historical ground calling it a leper window.

Some members of the D'Oily family who established the castle at Swerford are recorded as suffering from leprosy, so it makes sense that they would have built a window to allow these family members to see the altar.

Outside the window, at the base of a small buttress, is a very worn stone said to have been used by lepers as a platform to view inside the church more easily.

St Mary's is a lovely little country church. There is not an abundance of historical features to see, beyiond the font and leper window, but the location is idyllic, and the building has an air of peaceful calm that only an English country church seems to exude. 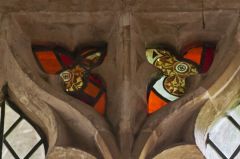 More self catering near Swerford

More bed and breakfasts near Swerford