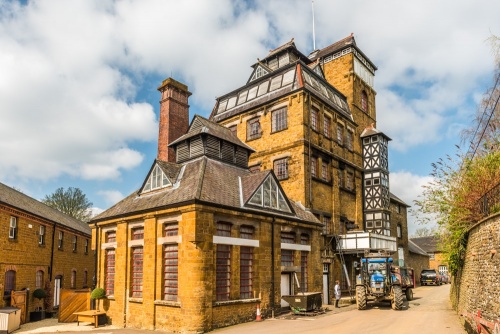 The pretty Oxfordshire village of Hook Norton is home to a historic rural brewery founded in 1849. Hook Norton Brewery still delivers barrels of beer to local pubs in a traditional dray drawn by shire horses and visitors can tour the 19th-century brewery buildings and enjoy the on-site brewery museum.

In 1849 John Harris purchased a 52-acre farm in Hook Norton. The farm estate came with an existing malthouse. Harris was more interested in brewing than he was in farming, and he took over the malting business. 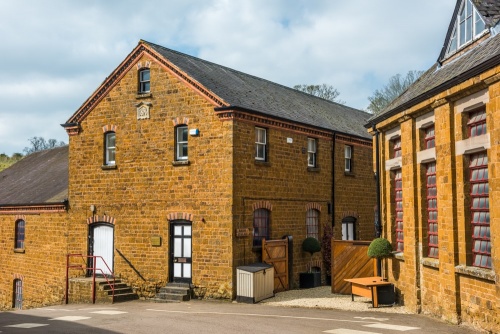 In 1859 the brewery bought its first 'tied house' at Down End. Tied houses are ins required to buy at least some of their beer from a particular brewery. Contrast that to a Fee House where the publican can buy beer from any supplier they choose. In 1869 the brewery bought the Pear Tree Inn, which stands a stone's through away at the end of Brewery Lane. Today Hook Norton Brewery has 37 tied houses.

Though many of those pubs received deliveries of beer in the traditional way, from a horse-drawn dray, the arrival of the railway into Hook Norton in the 1880s meant that the brewery's products were able to quickly reach a wider audience.

Founder John Harris died in 187 and the operation was taken over by his nephew Alban Clarke. Under Clarke's ownership, the brewery doubled in size. Clarke added a bottling room, shed, storehouse and stable block, built new offices, and erected the present six-storey brewery on the site of the original building. It is this picturesque late Victorian building that forms the core of the brewery today. 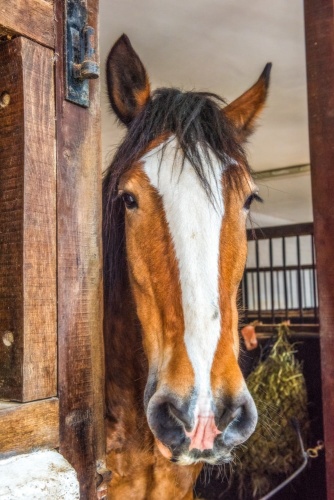 A shire horse in the stables

The power the brewery Clarke installed a 25 HP steam engine to pump water from a well beneath the brewery. This same steam engine still powers the operation and it is thought to be one of the last steam engines in Britain still in use for its original purpose.

Steam power did not stop thee; in 1904 Clarke bought a steam-driven wagon for delivering beer. This wagon was used to carry heavy loads to Banbury for further transport. Clarke wasn't slow to realise that this large wagon would make an excellent travelling billboard and had brightly coloured signs made for the wagon's sides. The steam wagon was decidedly old-fashioned by 1928 when the brewery bought its first lorry. The shire horses still delivered locally but the lorry handled anything further away.

Shire horse deliveries finally stopped in 1950, only to start again in 1985. As of this writing, the brewery has a stable of four shire horses, two of which are retired and two are still working. These horses deliver to pubs within five miles of the brewery and you can usually see them in action three days a week (weather dependent). Check the brewery website for exact times and days. The shire horses and dray often appear at local festivals and pub openings.

In 1999 the brewery opened a modern visitor centre in the Old Malt House. The Visitor Centre was launched by HRH The Princess Royal. 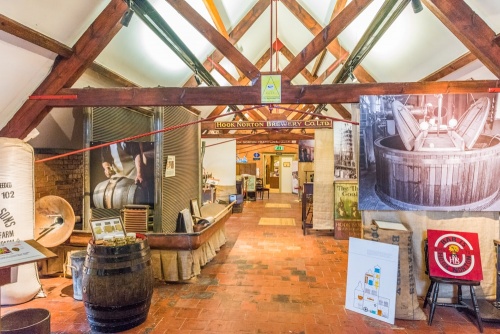 There are two main ways to enjoy the historic brewery. Visitors are free to walk around the brewery site and see the Victorian buildings from the exterior for free, and you can pop into the stables to meet the shire horses. Be prepared to be entertained if you meet the stable hands; we enjoyed chatting with two of them and they were happy to regale us with stories about the horses and about delivering beer in the dray.

The best place to learn more about Hook Norton Brewery is in the visitor centre, entered through the shop. The museum is free to enjoy and is well worth seeing.

The museum is separated into two parts. The first part looks at the history of the brewery and explains the brewing process with the use of historical implements and equipment. The second half of the museum space is devoted to the village of Hook Norton itself. 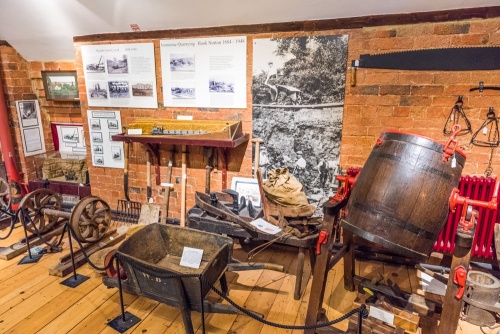 The brewery part of the museum does an exceptional job of explaining the brewing process and has examples of traditional machines such as a 'Hummeller' (removes unwanted awn from barley before malting it) and a Barley Screen (removes rootlets from the barley kernels). You see traditional wooden clogs used by maltsters and the different types and sizes of containers used to store beer. You can see a traditional pub scene with the barrels arranged for use, and a bottle-filling machine used to fill glass beer bottles before sealing with a cork.

The village part of the museum is slightly smaller than the brewery section, but it packs a lot of interest into a relatively small space. Here you learn about what life was like in Hook Norton over the years, including the amazing story of a couple whose house was in the path of the village water supply runoff. When the supply flooded, water coursed downhill towards their house. Rather than let it damage the building they would open both front and back doors and let the water flow right through the house and out the back to the stream below.

Other things that caught our eyes were a display on local iron mining, the working mechanism once used to operate the church clock, and a 1922 key to the village's Memorial Hall. There are children's' toys, old photographs galore, agricultural tools, railway ephemera, the former village bier and an exhibition on local churches and chapels.

The combination of the brewery museum and the local history museum into one venue is exceptionally well done and well worth seeing. 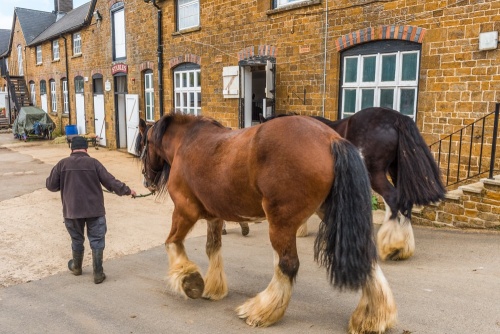 Shire horses being led to the stables

While the brewery museum is free to explore, there is another way to enjoy Hook Norton Brewery; a guided tour. Tours often fill up so it is a good idea to prebook through the brewery website. Tours last two hours and guide you through the historic brewery building, following the process of brewing from harvesting and processing hops to creating an award-winning beer. The tour includes a chance to view the shire horses in the stables (though you don't need to take the tour to see the horses).

As of this writing, the museum is open regular business hours and there are two tours daily during the week. Please check ahead, as these arrangements may change! The brewery itself is very easy to find. It is located at the end of Brewery Lane at the western edge of the village. Just follow the brown tourist signs that look like a beer barrel. There is visitor parking directly beside the visitor centre. 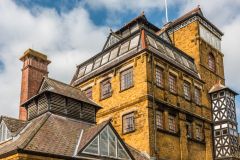 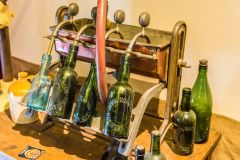 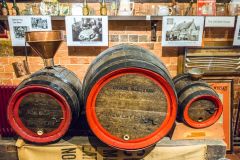 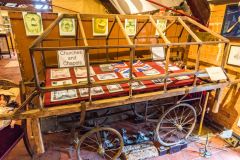 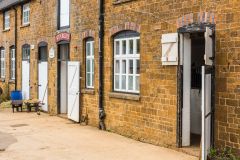 Self Catering near Hook Norton