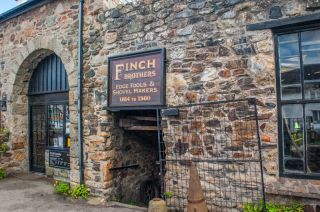 See live demonstrations at this 19th-century water-powered forge in a dramatic Dartmoor setting. The foundry is part of the circular 'Four Villages' walking trail.

The complex of buildings at Sticklepath was built in the late 18th century and originally served as a woollen mill. They were converted to become a grist mill before being altered once more to a forge, sawmill, and wheelwright's shop. Three overshot waterwheels survive; on the side and rear of the forge building and on the side of the nearby grinding house. Inside are 5 hearths, a large furnace, a polishing wheel, a band saw and a grindstone.

The Finch Foundry is one of the last water-powered forges in England. It was used to produce an array of metal tools for miners and farmers across Dartmoor. At its peak, the foundry crafted 400 tools per day, including shovels, scythes, and sickles. A wide variety of tools are on display to visitors, including a staff hook, used for clearing thick undergrowth, and a mole trap, a peculiar scissor-action device with a pressure plate between the forks.

It remained in operation until 1960 when the roof collapsed without warning. The building was rescued by a local man named Bob Barron, who restored the building with help from the Royal Engineers. Mr Barron operated the restored Foundry as a museum in conjunction with the local council. When Mr Barron died the National Trust took over the operation.

The forge stands in a lovely location overlooking the River Taw with views to the moors beyond. There are demonstrations of the forge machinery every hour during the day. The water wheel powers a drop hammer, tilt hammer, and shear hammer to help the workmen create shapes from cast iron bars. 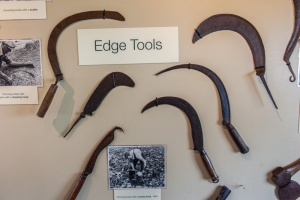 A display of tools produced in the Foundry

Visitors can get a glimpse of what it was like to be an apprentice in the Upper Gallery, where you can learn about how water wheels work, trade and industry on Dartmoor, and the history of the Finch family, who became famous throughout Britain in the 19th century for their quality tools.

Outside is a cottage garden and nearby is a Quaker burial ground, and the summerhouse built by Tom Pearse, who was made famous in the 'Uncle Tom Cobley and all' poem about Widecombe Fair.

The Foundry is very well signposted from nearby roads. There is a visitor parking area, but to reach it you have to navigate your vehicle through an exceedingly narrow opening beside the main visitor entrance. Nerves of steel are helpful! You enter through the shop at the rear of the foundry, beside one of the water wheels.

I came at precisely the same time as one of the regular talks was scheduled to begin so I was able to nip into the foundry workshop just in time. The volunteer guide was a very experienced foundry worker and explained how all the machinery was used and how the forge operated at its peak. He showed us the small shear hammer in operation and told us that when the large one was working every house in the village would shake from the impact.

From the forge itself, we went upstairs to the wheelwright's shop, where we got to examine the different types of tools and other objects manufactured at the Foundry. Beside the shop was the grinding house, where we could see the huge grinding wheels in operation, driven by enormously long belts.

Outside the main set of foundry buildings you can see the wooden leats bringing water to the wheels, and explore a small, but attractive garden. Behind the garden is the Quaker burial ground, and behind that is a trail along the river, linking several historic sites around the village. There is a small tea room between the garden and the parking area. 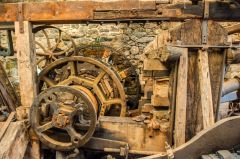 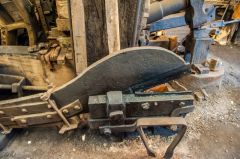 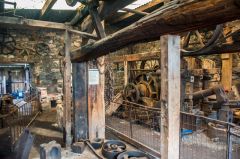 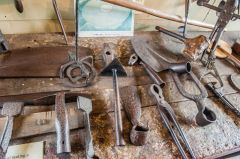 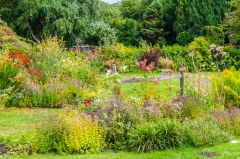 More self catering near Finch Foundry >>